Is there a method for making Google Chrome open textareas in vim?

I used to use Firefox on a daily basis but have switched to Google Chrome, and have been using it for 2+ years now. The one plugin that I miss is this one, It's All Text!. This plugin allowed for the textarea to be opened into a separate vim or gvim window where I could do editing and then save the contents when done, back to Firefox.

The closes thing I've found is this plugin is TextAid, but I find it a bit of kludge since it requires a separate web server to be kept up.

I'd really prefer not having to use TextAid, does anyone know of any alternative methods to achieving this using Chrome?

With the extension, you could press Ctrl-i to call the vim editor out when you're in a input or textarea element. Then you could edit your text with the vim editor, and :wq to write text in vim editor back to the element on page.

You could also use the vim editor to select option for a select element, which is useful when there are tons of options within the select element.

More info could be found -- vim editor with ACE .

Wasavi opens text areas in a vi-like editor, which is configurable via an rc file.

Videos and download links on the GitHub page. Chrome, Opera and Firefox are supported.

Here's an example of me editing this answer: 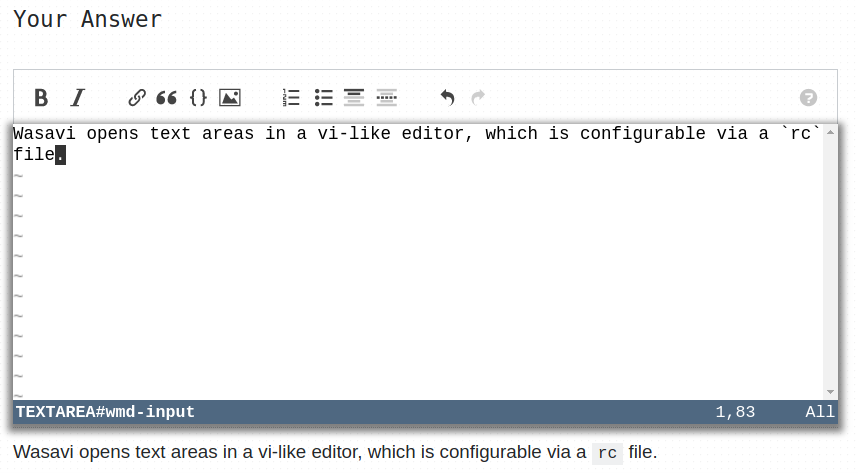 It's more difficult with chrome (by design), but you can try textaid.

In general you have to have a backend. Though, it does not need to be a web server. If you are comfortable with having a script running locally each time you open an edit or have a service running (Though that would be close to the issue at hand) it can be done trough using the API to communication with local scripts over pipes.

In short how it works is by using Ajax in the browser. An extension can call a local script which in turn open desired editor and keeps the communication going. The local script prints data to stdout and the extension receive what is pushed.

Another choice is to use local storage but have not found a way to nicely combine it with actually launching local applications.

I have a project on ice using python as backend and primarily Vim as editor, but have also tested it with things like Emacs and Gedit. I had a working version, but mangled it up and have not looked at it for some time.

This is not an answer per se but added it as a note. I might work on the plugin and come back to it ;), but if local script is a non starter I'm afraid it won't help much for your request.

Not the answer you're looking for? Browse other questions tagged vim chrome plugin or ask your own question.