So I have .cdr files on my PC and I want to open them on my Debian 7 box. What software do I need to be able to open it?`

I would see if you can open the .cdr files with Gimp. According to this page Gimp supports editing these files. Gimp should be available in the Debian repos, look for the name gimp.

I downloaded this sample image, cup.cdr (uncompressed 18K), from this Corel website. However I wasn't able to open it, there might be a plugin for Gimp.

The other method you could try (which worked for me) is to convert the .cdr image using the command line tool uniconvertor, and then open it up in Inkscape.

Once you've created the .svg file you simply open it in Inkscape. 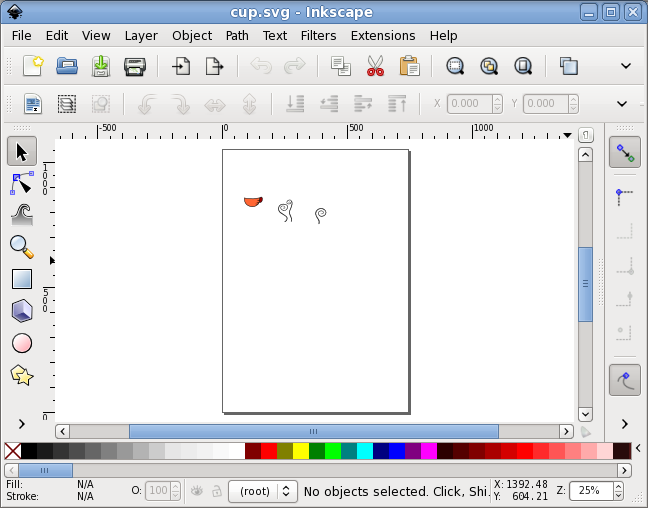 If you don't want to try the above, you can take a look at the Inkscape FAQ, there is a guide on how to import .cdr files as well. The FAQ section is titled: Can I open/import *.cdr (Corel Draw Vector drawing file) files in Inkscape?.

Your mileage may vary?

I found this thread regarding the conversion process.

Inkscape can import some versions of .CDR files (ver. 7-X4), from there one can export/save as .SVG. Don't know if there are bugs in that process (e.g. multipage documents, text/font problems, etc.)

Inkscape uses the very same converter as Scribus. It's called UniConvertor and only supports paths with flat fills and strokes (and maybe bitmaps, but I'm not entirely sure). There has been no progress re CDR support in UC in last few years (the primary developer is busy rewriting things yet again), and unfortunately I don't see it changing any time soon.

However there has been quite a bit of progress on reverse-engineering CDR recently on the re-lab side recently, and hopefully things will change now that there is libcdr by one of LibreOffice developers.

I was able to open a corel draw .cdr file perfectly using LibreOffice Draw, no file conversion needed. I had no such luck with converting to .svg and opening in Inkscape.

1
Looking for simple photo organizing software for Linux
6
Are there any multiformat image viewers, which are similar to feh and can show SVG files?
8
Ways to convert and combine image files into a pdf file?
3
How to add a software to the list under "open with" other applications in Linux Mint 16?
3
Showing Image Metadata with Less Pipe?
2
How to view a big svg file?
1
Delete RAW image files that have no JPG counterpart