How do I install Debian onto the same physical hard disk that the installer files are on?

You have a 400gb hdd (internal) you create a 1 partition (of size 600mb), format in ext2 or something like that, extract debian installer there, install grub to MBR and configure so that it can boot the debian installer.

Target user start the target pc with installer on that partition and start debian setup (with no need to have installation cd, nor USB disk). User can anytime reinstall their system by returning to this setup (as a recovery option in grub)

How can I do this?

So, is this your case? 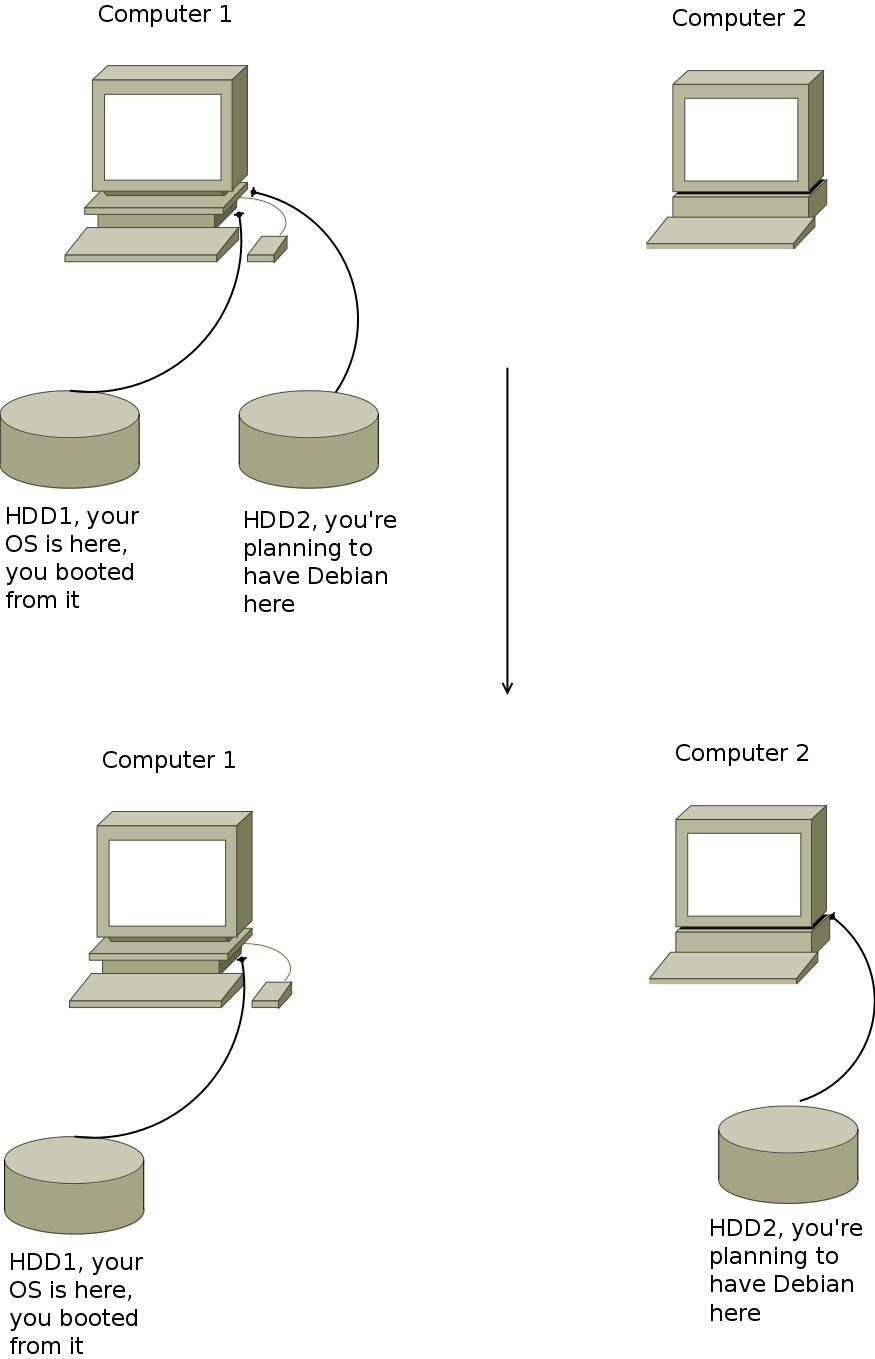 What Operating System are you running at your computer 1? If you have an already working Debian system on HDD1, you could just clone it to HDD2 and run without any installation. Just use bitwise copy program dd:

I assume here that HDD1 is /dev/sda and HDD2 is /dev/sdb Then before plugging HDD2 of the computer 1, try to change device boot order in BIOS and try to boot from HDD2, not HDD1 as usual.

WARNING0: I suppose, that your HDD2 doesn't contain any information and you can overwrite it totally.

EDIT: Debian suggests another way: http://www.debian.org/releases/stable/amd64/apas02.html.en#howto-getting-images-hard-disk, see booting from hard disk. They suggest, that you partition you HDD2, put kernel image and initrd ramdisk onto a boot partition and copy and .iso file somewhere on that disk. Then, you install bootloader there, e.g. GRUB, reboot from that disk, GRUB loads kernel and ramdisk, kernel somehow finds the .iso image with installer and starts it.

EDIT 2: Ok, I decided to write a digestion of how I would've done the whole thing, but I'm not sure about certain points. It's just what I'd do at your place.

1) Partition your HDD2 with some partitioning tool. You'll have 1 partition, where the installer will reside and it will stay untouched during the installation process. I'd put the installer partition to the back side of the HDD2, cause, I'd have it removed after I install Debian.

2) Download hd-media installation kernel image (vmlinuz), installation ramdisk () and installer image () e.g. from debian archive: http://ftp.debian.org/debian/dists/squeeze/main/installer-i386/current/images/hd-media/ and put them to the Installer partition of HDD2. Note that this link is for i386 architecture, if you want e.g. 686 (64-bit) kernel, load it from appropriate (686) folder of debian ftp. 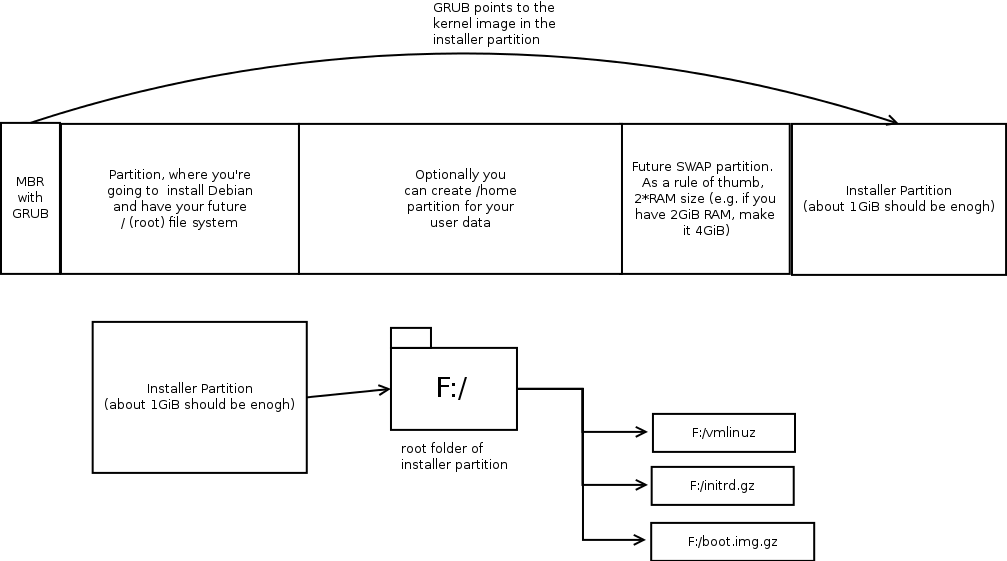 3) Install GRUB to the MBR, DOS compatibility region and/or beginning of your installer partition. See this to understand, where GRUB resides and how it works. As you're using Windows, you'll have to use something like GRUB4DOS. GRUB configuration should be as described here. Or you can use other bootloaders, such as LILO or Loadlin, they should be better suited for running kernel from NTFS or FAT filesystems, used by Windows machines. Consult to Debian website.

4) Plug HDD2 off and attach it to computer2; set device boot priority in BIOS to boot from HDD2.

7*) Boot Debian. Optionally you can remove installer partition (e.g. with GParted) and merge the free space with /home partition.

Not the answer you're looking for? Browse other questions tagged debian system-installation hard-disk or ask your own question.

13
How to install Debian from USB? (Using full size image not netinstall)

7
ntldr.mod missing from GRUB2
1
How do I partition my disk to install encrypted Debian installation alongside OSX?
1
Install Debian from the hard disk replacing the host Linux system
10
GRUB and LILO both fail to install to NVMe hard disk when installing Debian
1
Replace failing hard disk on debian
2
Installing Debian on a USB hdd doesn't not prompt me where to install GRUB
0
USB boot device no longer detected even after reinstall