I am trying to connect to my WEP network just using the command-line (Linux).

Then I try to obtain an IP with

without success (tried to ping google.com).

I know that the keyword is right, and I also tried with the ASCII key using 's:key', and again, the same result.

I get the message below when running dhclient:

I have no problem connecting with WICD or the standard Ubuntu tool.

After that write and close file and use command:

First, get your WiFi card up and running:

Now scan for a list of WiFi networks in range:

To obtain the IP address, now request it with the Dynamic Host Client:

You should then be connected to the WiFi network. The first option is better, because it will be able to run as a cron job to start up the wifi whenever you need it going. If you need to turn off your WiFi for whatever reason, just type:

I have also seen people using alternative commands. I use Debian, Solaris and OSX, so I'm not 100% sure if they are the same on Ubuntu. But here they are:

If you have nmcli installed, I think this is the simplest solution.

For a new connection:

Or if a connection was already set up:

(or if that does not work, try nmcli con up id <mySSID>)

There is Danijel J's two options are good, but there is also a 3rd option if you have this working via the 'standard Ubuntu tool' using nmcli, which should already be installed at /usr/bin/nmcli.

Copy the UUID of the SSID you want to connect to so you can paste it into the next command.

and this will, using the same stuff as the 'standard Ubuntu tool' connect to your wifi!

Use nmtui if you are just looking to connect. 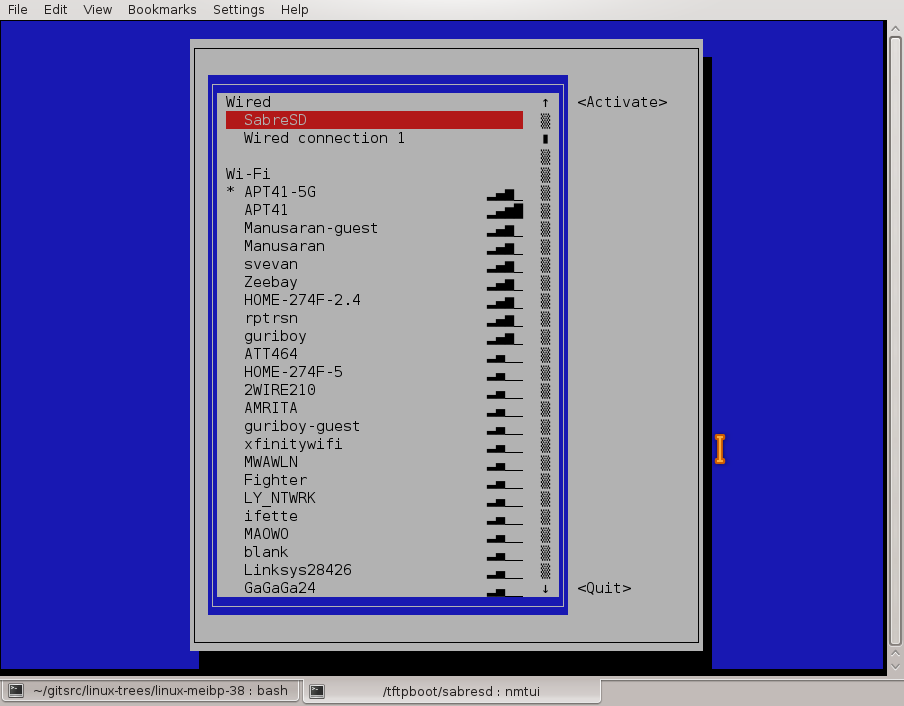 You'll be prompted to activate a connection, with the list of SSIDs and you can just enter your password.

Install wpa_supplicant and you have a nice software for all of your Wireless needs. You can then use wpa_cli command to access and set your network interactively. there is also a number of 3rd party software available acting as a GTK+ or QT GUI for wpa_supplicant if you want to go gui at anytime.

Besides from above answers, you can also use wifi-menu on Arch Linux. It will show a CLI-Based GUI and you can choose a WiFi from WiFi list that is shown. wifi-menu depends on dialog though. You must have it installed first.

Laptop with no WiFi switch. No bios always on or disable switch etc.

I attempted to bring up the interface got the

Not permitted due to RF-KILL blah blah

The saw a soft block on the wriless cards Did Rfkill unblock (index #) of device
once that was done my WiFi led turned on. 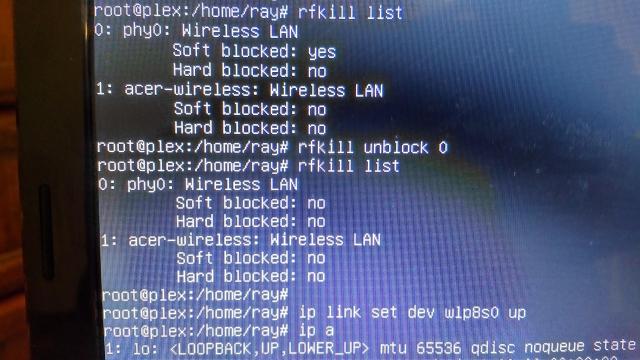 I know that this was asked 3 years ago. I am answering just in case someone else runs into this situation as I've just did.

The thing is that everything is correct until the dhclient part, where it gets stuck at "DHCPDISCOVER on wlan0..." forever.

Solution: Go to your network manager (Wicd, Network Manager, whatever) and unmark the "Enable Networking" option. It seems that it interferes with the dhclient's normal functioning.

1
How to view WIFI devices names and signal strength
17
How to connect to internet using `nmcli`?
7
What is UUID of a wifi network?
3
Basic network via command line
0
Can't login to Linux Mint 17.2 after "complete remove" of libimobiledevice
0
how to repair or reinstall kde noen with live-boot