I have a virtual appliance in Xen format (XVA) that I wish run to on another hypervisor (MS Hyper-V). What have I done so far:

I have converted the XVA to OVF using XenConvert, this resulted in a vhd file. I created a new VM and attached the vhd to it.

The VM fails to boot, I think this happens because it runs a xen dom0 kernel. This is the error:

I think I need to replace the xen kernel with a non xen kernel. Can I simply download a pre-compiled kernel (where?), boot with live cd, place it on disk and change grub.conf?

Trying Doug O'Neal's answer, I needed to install lvm2 (apt-get install lvm2) and mount VolGroup00. After that I installed the kernel with yum and copied it over to the boot partition. I edited grub.conf and tried to boot. System hangs after booting kernel. Any suggestions? 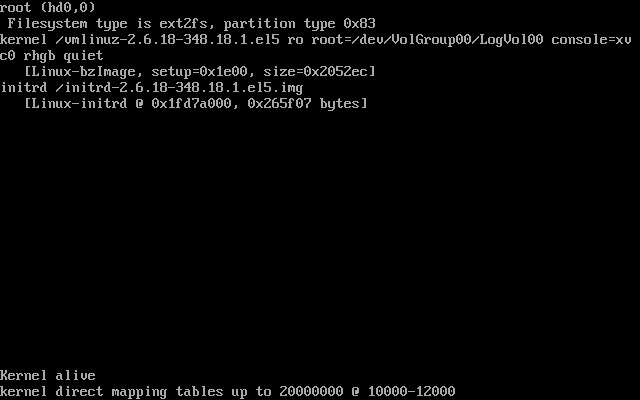 changed grub to use tty0 as console (was xvc0), now getting a little further, will troubleshoot that first. EDIT3:

I have changed several references to XEN ad per @Nils answer. It is still needed to replace the kernel and I think this is currently my problem: When I run yum install kernel I am observing the following error:

The XEN-Kernel is not the main problem here. You need to bring the Hyper-V-disk-module into the initrd.

With kernels newer than 2.6.32 this is a peace of cake - since Linux mainstream contains these modules.

Prior to that you have to compile these modules for your kernel.

Here is a good starting point in Microsoft Technet about that topic.

Try booting off of a rescue cd and mount your local disks. chroot into the mounted file system and run yum install kernel. This might do it for you.