Recently I have come to believe a number of unusual occurrences that have happened while running a Parted Magic Live CD, are the result of running out of space on the RAM based filesystem, namely:

...Not despite the SpaceFM warning of no space to store state data AND some of these problems disappearing only after moving some files off the filesystem.

Problem being, I am not sure how to (at least) keep an eye on the "space" left of the filesystem (Note: There is no entry for the / partition in the output of df, fdisk -l or mount), let alone (assuming I am right that the filesystem space not being relative to the system memory, that I had been monitoring with conky) how to go about increasing the sizing ?at boot time?

P.S Thought it most appropriate to tag this question with parted-magic, ramfs (or tmpfs... Not sure how to identify which one is in use) and low-disk-space like tags, but alas there doesn't appear to be any of them. If the community doesn't want to create one/all, please feel free to suggest other tags that others feel are appropriate.

By default, a tmpfs ramdisk will be set up to use a maximum of half of the available RAM in the system (note that a standard, non-PAE, 32-bit kernel can address a maximum of 4GB less any address space used by devices like VGA cards).

I've just booted Parted Magic 2013 08 01 in a virtual machine, giving it 4GB RAM. The rootfs has a total of 2GB, with about 444KB used, so PM is using the defaults for tmpfs. If i reboot the VM with only 1GB RAM, the root tmpfs has only 504MB available - the kernel uses some, so that's slighly less than half total RAM.

It also mounts /tmp and /run as tmpfs of the same size. Note that these filesystems are not additional space, they use the same pool of RAM as the rootfs and any running programs (i.e. slightly less than 1GB on a system with 1GB RAM).

(BTW, df wouldn't even run until i deleted /etc/mtab and replaced it with a symlink to /proc/mounts).

You seem to be doing both. You're filling up the disk with your log files, AND you're running firefox, X, and rdesktop - all of which tend to use large amounts of RAM. Unix systems don't react well when the rootfs gets full, and when RAM starts getting tight the Linux kernel's out-of-memory (OOM) task will start randomly killing processes to free up some RAM.

Either of these factors alone will cause weird, unpredictable problems. Both together just make the problems inevitable.

As others have suggested, I strongly recommend that you don't use a Live CD (Parted Magic or any other) in this way. They're not designed for it, and what you are doing is pretty much guaranteed to cause problems. In short, Don't Do That, Then!.

Instead, either re-partition your hard disk and install a small distro onto it, run a linux distro in a VM, or find a distro that installs and runs off a USB stick without using tmpfs for /root - i.e. uses the USB stick as its root filesystem (this would be a lot slower than running from a tmpfs. and no, I don't know of any that work like that). or use a USB hard disk rather than a USB flash disk.

BTW, How much RAM do you have in your system and what version of Parted Magic are you running? 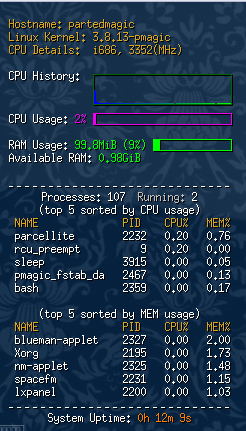 Or you may be running out of blocks or inodes, you may be able to infer this information via stat:

As I and others have said in the comments, you should not use Parted Magic as a normal distribution, it is not designed for it and is bound to have problems.

Anyway, that said, to check the space available you can just run df. I don't want to buy a copy of Parted Magic OS to test this, but the following is the output of df on a virtual machine running an Ubuntu Live CD:

Most of these are tmpfs style things (non of them are actual mounted partitions anyway) that exist in RAM. df can still accurately report usage. If you don't see a / entry under Parted magic, I guess they are using some kind of esoteric naming. Another hint that you are using the wrong tool for the job.

I've run into this problem for years on live CD/DVD/USB distros like Debian, Ubuntu, Mint, maybe even Fedora if I recall. Memory used by overlayfs (the currently used fstype for live Mint/Ubuntu) and tmpfs are hidden in free 's cached memory (and /proc/meminfo's Inactive entries), along with temporary disk read caches, so it's unclear how much memory is really "free".

I'm using df to add up all the space used by overlayfs & tmpfs, and subtracting it from the free + buffers + cached info from free. I'll have conky highlight that number next to it's misleading "free ram". All sizes are in K's.

If your distro's live version doesn't support df then I don't know where to look for info on overlayfs/tmpfs. mount, /proc/mounts and /etc/mtab seem to only show maximum or no sizes, not current size like df does.

First for the space used by overlayfs & tmpfs,

FYI, df's -t only shows that type of fs (could put both into one df), tail only gives the last total line, tr compresses whitespace to a single space so it's easier for cut to cut the right field out.

And for the free ram you can parse free 's output (probably easier) or read from /proc/meminfo (I already tried & typed it this way):

Then put it together, say for a nice script output that conky can exec or execi every minute or two:

As to using a live distro for daily use, the whole point of Ubuntu's (and many other) live versions is to try out a distro for regular "daily" use for a few hours and see if you like it. And many online banks and security-conscious articles specifically recommend using a live distro for secure online banking and the like. The fact that the live distros don't realize when they really run out of ram is IMO a bug. I was able to crash a live Mint just by copying big files to $HOME and /tmp since they're both using ram, and both have a max size of 1/2 ram. FYI Currently Mint's got possibly half of ram used by each of / (overlayfs), /dev (devtmpfs? only 4k used so I'm assuming it's normally tiny), /tmp, /run/shm

Not the answer you're looking for? Browse other questions tagged filesystems or ask your own question.