What does the Windows flag in the Linux logo of kernel 3.11 mean?

I've just installed kernel-3.11.0-1.fc20 for my Fedora 19 installation. During the rebooting progress, I saw the Linux logo with a Windows flag in it, what does it mean? 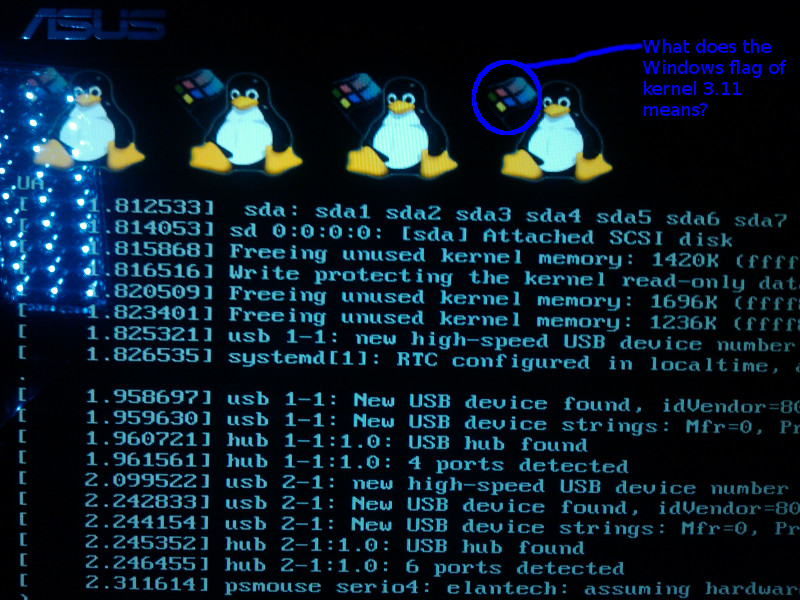 The Fedora 19 is installed in an ASUS TX300CA notebook, secure boot is off, CSM (BIOS Compatibility Support Module) mode is on.

A couple of years ago, Linus Torvalds was discussing Linux version numbers and said, "I think I will call it 3.11 Linux for Workgroups."

From the news: 20 years after Windows 3.11, Linus unveils “Linux for Workgroups”

It's a joke by Linus. This page: http://www.extremetech.com/computing/161426-linux-3-11-named-linux-for-workgroups-in-odd-homage-to-its-archenemy-windows gives more detail.

Not the answer you're looking for? Browse other questions tagged kernel linux-kernel or ask your own question.

3
What does this Linux kernel trace mean?
17
The UEFI & SecureBoot impact, how severe?
2
How can I install Arch Linux on a Laptop with Intel GMA 4500 MHD?
4
How Smooth is Upgrading Linux kernel in Debian 8.5?
0
Kernel Panic, can't boot into Linux after re-installing grub… is this because of a kernel mismatch?
5
Ubuntu 21.04 hangs at "loading initial ramdisk" after kernel update with LUKS