I just added this to my .bashrc to get colorized output with less:

... and now all of a sudden certain commands (seems to be related to displaying environment variables) produce color output that matches these new settings. Am I escaping wrong? Or is this intentional behavior? I tried a few other escape variations, but they didn't work with less.

For example, here is a screenshot of an env command. 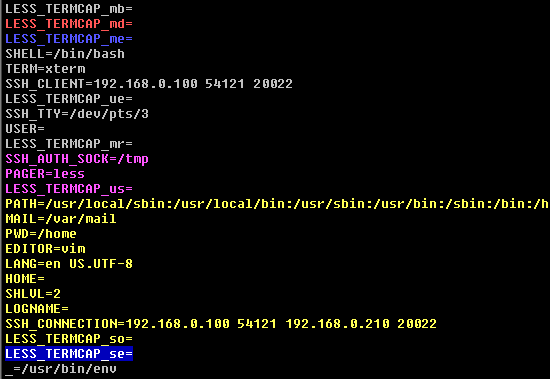 php -i also has colorized output, but only on the environment variables section.

This is normal behavior. These environment variables contain escape sequences that cause the terminal to change its foreground color. You get the same visual effect when any program outputs them, be it less or env.

These variables need to contain the actual escape characters, less doesn't do any postprocessing on them.

Normally you can put less configuration variables in your lesskey file, but this doesn't work for the LESS_TERMCAP_xx variables, because less reads them before it reads the lesskey file (as of less 444). So you have no choice but to put them in the environment.

If you want these variables to apply only to man and not to other uses of less, you can use an alias for man that sets the PAGER variable to a wrapper script that sets the environment variables.

(Alternatively, use #!/bin/bash on the first line and you can use the #'\e' syntax to get an escape character. On systems where /bin/sh is dash, using /bin/sh is very slightly faster, although it may not be noticeable in practice.)

Call this script less-color, and add alias man='PAGER=less-color man' to your ~/.bashrc or ~/.zshrc. On some systems, instead of creating an alias, you can tell man to use a different pager by setting the MANPAGER environment variable: export MANPAGER=less-color in your ~/.profile.

I'd look very carefully at the settings you made in your .bashrc, and ensure they're correct. I suspect that all you need to do is eliminate the dollar sign.

As @Gilles points out in his answer, this is an expected behaviour.

Let me just add couple info. LESS_TERMCAP_xx override TERMCAP capabilities. This overriding is managed by less itself in screen.c and the value is just used later on as if it was returned by TERMCAP library. That means it has to be raw sequence of control characters.

Not the answer you're looking for? Browse other questions tagged bash colors xterm or ask your own question.

6
Tmux eclipsed colorized output of ls
25
Can the empty spaces/background in a terminal be replaced with a random(but pretty) pattern of ASCII characters?
2
Running commands on several files and giving each output a unique name
0
Colorized tail: How to set default color
0
colorized path in PS1
2
colourise grep output
0
Unexpected output of xargs