I'm not sure if this is more of a SuperUser or UnixLinux question, but I'll try here...

Recently, I found this:

It would be nice when aptitude would use unicode characters for the trees in the dependency lists, e.g. instead of:

... and I thought - wow, I really like that ASCII-art tree output, wasn't aware that aptitude could do that! So, I start messing for an hour with aptitude command line switches - and I simply cannot get that output? So my initial question was - where does that output come from in the first place?!

After a while, I realized that on my system, aptitude ultimately symlinks to /usr/bin/aptitude-curses; and I finally realized that aptitude has a curses interface! :/

So, I finally run aptitude without any arguments - and so the curses interface starts, and I can see something like this: 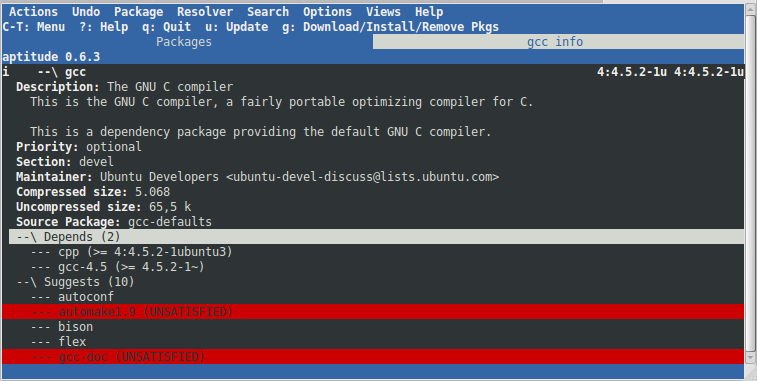 ... so quite obviously, those ASCII tree characters come from the curses interface.

So I was wondering - is there a Debian/apt tool, which will output such a "visual" ASCII tree - but with actual dependencies of packages?

I know about debtree - Package dependency graphs (also software recommendation - How to visually display dependencies of a package? - Ask Ubuntu); but I'd rather have something in terminal, resembling a directory tree (rather than the "unordered" [in terms of node position] graphs from debtree, generated by graphviz's dot).

I've also seen Is there anything that will show dependencies visually, like a tree?, which recommends:

So, the question is - is there a tool, that would produce a dependency tree graph with terminal characters - like, say, in the following pseudocode:

You can do it with bash script

Not the answer you're looking for? Browse other questions tagged linux debian apt aptitude or ask your own question.

2
How to fix install shutter in kali linux?
13
How to install a functional ARM cross-GCC toolchain on Ubuntu 18.04 (Bionic Beaver)
3
libc6 does not want to update to 2.29
0
Cancel failing apt-get upgrade
20
How to install clang-10 on Ubuntu 20.4
1
libc6 Error while installing or upgrading with apt
0
Cannot update/install openssl (or any) package; "Unmet dependencies" "E: Sub-process /usr/bin/dpkg returned an error code (1)"