Is there something like a stereo (separate left-and right-channel) tone-generator for Linux? Where you can set volume and tone/pitch for each channel, and preferably also set the wave-form (sine, square, sawtooth, ...) and invert one channel (as opposed to the other).

If not, any ideas for a good places to start to make one? I guess the simplest would be to adapt existing programs like synths... But if that work poorly, are there any libraries (like SDL?) that can be used as bases for such a program?

It sounds like you're looking for Audacity which is a cross-platform open source audio editor. One of its features is to allow you to generate tones. It's a multi-track audio editor, so you can easily create a stereo tone.

Under the Generate menu, you're able to create Sine, Sawtooth, and Square waveform tones of arbitrary frequency, amplitude, and length without the need for recording or needing additional input files.

ffmpeg can do it, as usual.

Stereo instead with -ac 2:

The file will be 2x as large, and ffprobe will say it has 2 channels instead of 1 channel.

Play the audio for 5 seconds without creating a file:

Play forever until you go mad:

You might look at speaker-test, which (on an Arch machine) I find in alsa-utils package.

speaker-test -c2 -t sine run from an xterm, gave me a 440 Hz sine wave for about 6 seconds each, alternating left and right speakers. In the xterm, it gave some information about which speaker it thought it was using.

According to the man page, it can do sine waves of arbitrary frequency and pink noise.

The siggen program should do the trick. 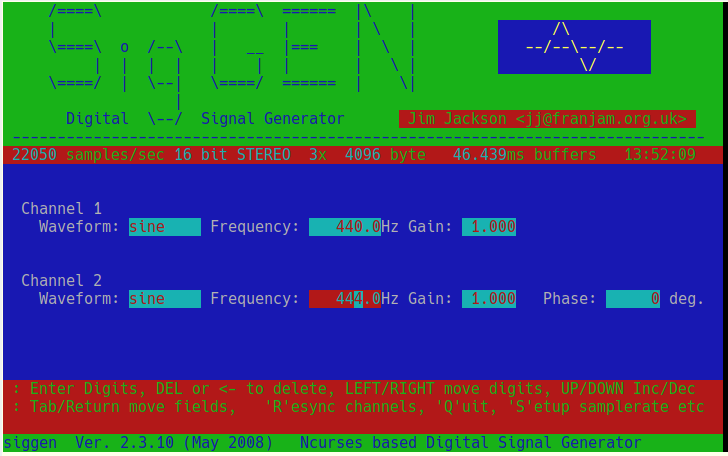 It has two channels with independent signals and a phase between them. Each channel can do these signal types:

You can run it in stereo mode like this:

Note that this relies on /dev/dsp which was provided by OSS. OSS was superseded by ALSA and deprecated around 2006, so you will probably need to install a compatibility library. On Debian-based distros, install the alsa-oss package and run it like this:

You can also try it with the PulseAudio OSS Wrapper which is provided with the pulseaudio-utils package:

The saugns program can also do it. (It is a command-line audio generator (currently) supporting 8 wave types and FM/PM/AM modulation techniques.)

To generate two stereo-separated 100 Hz waves, one a sine and one a triangle, and one with inverted amplitude, the following script can be pasted into a file and ran through the program (as in ./saugns filename):

The ts specify time, in seconds.

Edit: I'm indeed the developer of the program.

Also, an alternative way of flipping the amplitude (for some wave types, e.g. sin but not saw), is to set the phase using a lowercase p. Adding p0.5 sets phase to 50% of the wave cycle (negative half). Further, as there's no named cosine type, p0.25 is the way to turn sine into cosine (or p0.75 for negative cosine).

You can easily synthesize tones with SoX. There were some stumbling blocks but I was eventually able to figure it out.

I had trouble interfacing SoX with PulseAudio so I just pipe sox raw data into paplay.

The pipeline is tedious so I created a script:

The remix effect is just used to send the result to a specific channel. It is much more powerful but we only use the basic functionality here. In this example we have a six-channel device and we're sending a tone to the third channel.

I originally created an ALSA device wrapping the PulseAudio device, but then I found that it is impossible to control the channel mapping using ALSA, and so random channels were getting mixed together according to how my custom channel-map differed from the ALSA default. This is why I have --no-remix --no-remap in paplay above; I just want the raw channel ordering for the sox command.

I kind of wish that audio stuff on Linux had better documentation and error reporting.

You may be interested in an answer I posted recently showing how to set the PulseAudio Equalizer from the command-line.

Not the answer you're looking for? Browse other questions tagged audio libraries or ask your own question.

10
How to control equalizer within command line?
5
Audio tone/sine generator with frequency gauge