I have tried Ubuntu 13.04 and Linux Mint 15 and both DO NOT HAVE optinos for setting mouse scroll wheel sensitivity.

They had only mouse acceleration and sensitivity, but the scroll wheel speed you cannot set in these distributions.

It's frustrating, to not be able to set this thing.

Is this only a problem of Gnome distros or KDE and Xfce has the same problems too?

Yes, Kubuntu is one of them. The mouse scroll setting is not specific to any Linux distribution, but rather supported by the desktop environment.

Kubuntu runs KDE Plasma 5, beginning from 14.10 release. The mouse scroll setting can be found in KDE as early as KDE 3.5, and probably TDE also, and has continued to exist in KDE Plasma 4 and newer.

Lubuntu runs LXQt, beginning from 18.10 release. LXQt is a relatively new desktop environment that shares some components from KDE. The mouse scroll setting like KDE can be found in LXQt. 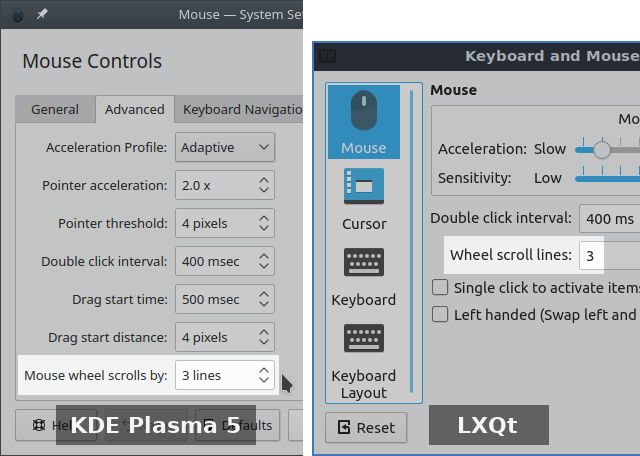 Besides Kubuntu and Lubuntu, any Linux distribution that runs KDE or LXQt will most likely have the mouse scroll setting similarly.

There are distro-agnostic solutions, such as using a tool called imwheel or libinput as suggested in this answer, using Xorg configuration which is often hardware-dependant, and may be more.

Is this only a problem of Gnome distros or KDE and Xfce has the same problems too?

I had used legacy KDE 3 and GNOME 2 back then, but I've come to liking Xfce because it has "sufficient" options out-of-box. And yet, Xfce doesn't have the mouse scroll setting. The reason? That is likely what has been decided by the project team, although this is concurred from my opinion.

Linux distributions that run KDE or LXQt have the mouse scroll setting, mainly because their desktop environment offers extensive options for out-of-box customization. That being said, not all distros are created equal.

Not the answer you're looking for? Browse other questions tagged gnome kde xfce mouse scrolling or ask your own question.

9
Mouse scroll wheel speed far too sensitive
1
Setting mouse speed in Gnome just like in other desktop environments
55
How can I set mouse sensitivity, not just mouse acceleration?
2
How can I increase the acceleration of the mouse wheel via xinput?
10
How to increase horizontal mouse scroll sensitivity?
4
Why is my dual-scroll Wheel mouse only behaving as if it has a single wheel?
10
Modify mouse wheel and touchpad two-finger scrolling speed