I'm running Ubuntu 12.04 LTS on my notebook, and I've got a Motorola Razr which I updated to Android 4.1.2. Before updating, I connected my smartphone to my hotspot wifi very quickly, but after the update it no longer works. Android 4.1.2 can't see the hotspot created by Ubuntu; it sees all other wifi networks and can connect to them, but not mine. What could be wrong?

You can use ap-hotspot from the webupd8 repository to create an infrastracture AP instead of adhoc. I am using this on Ubuntu Precise (12.04), but it is available for Saucy, Raring and Quantal as well.

Follow the steps to create detectable hotspot in Ubuntu:

There are 2 things you need to make sure you have configured correctly. The WIFI hotspot on Ubuntu and your Android device's ability to connect to an ad-hoc hotspot.

Setting up WIFI ad-hoc on computer

This tutorial covers getting your ad-hoc, titled: How to set up Ubuntu 12.04 laptop as WiFi hotspot (ad-hoc) to share wired internet. In general you need to setup a WIFI hotspot under "Edit Connections -> Add" similar to the screenshot below: 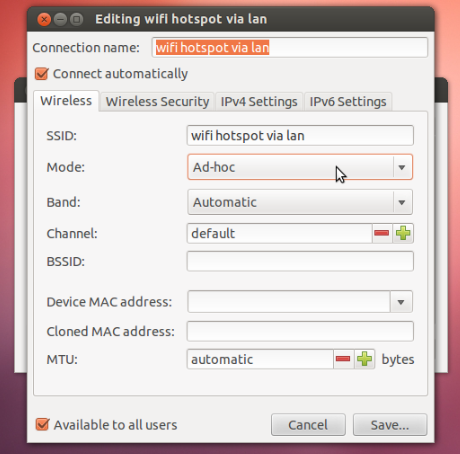 Then specify your wireless security settings similar to the following screenshot: 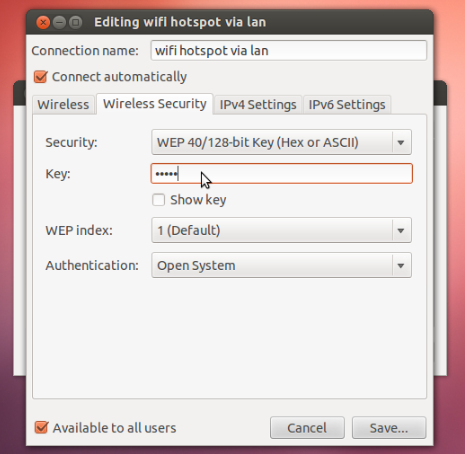 Make sure it's set with the following options:

Under the “IPv4-Settings” tab, choose the option “Shared to other computers” for “Method”.

According to this thread over on the Ubuntu Forums titled: Hotspot is not visible on other devices (12.04 precise), you need to follow this tutorial. It's reported to work for HTC Sensation 4G devices but might work for Motorial Razr. These are patches so YMMV.

Not the answer you're looking for? Browse other questions tagged ubuntu wifi android or ask your own question.