sudo: unable to initialize PAM: No such file or directory

While trying to build the NumPy Python math module with Intel's Math Kernel Library (MKL) on OSX 10.8.3, I was running into some problems with the Accelerate and vecLib frameworks overriding the MKL. At any rate, I decided it would be a good idea to rename /System/Library/Frameworks/Accelerate.framework and /System/Library/Frameworks/vecLib.framework temporarily. Nothing happened (at least, on the command line) after moving Accelerate.framework. However, after entering

I got the following error:

Oops. Unfortunately, the mv command worked, but now when I try to use sudo I get the same error, but the commands don't work. When I tried to rename vecLib through Finder, I get:

which apparently is some sort of permissions error.

So, my question is how can I get sudo working again? App Store.app won't even run, so I can't reinstall XCode (which is apparently where vecLib.framework comes from) or anything else. I'm afraid to reboot because I'm worried the computer will hang, whereas (as you can tell) at least it's working for now, albeit without any elevated permissions capabilities.

Normally I wouldn't cross-post, but I need to figure out a way to fix this ASAP.

With OSX you can boot into single-user mode by holding down Command-S after rebooting. You essentially have password-less root access to the system, with no PAM or other authentication, so you can fix all sorts of system issues like lost passwords and accidental directory renames this way.

Yes, this is a potential security hole, but giving someone physical access to your machine is a security hole itself. It can be disable/password-protected if you want, and if you're really worried you can always encrypt your volumes so an intruder couldn't read your files even if they got this far.

You can also reveal the /etc/pam.d/sudo file in the Finder and change the permissions there. 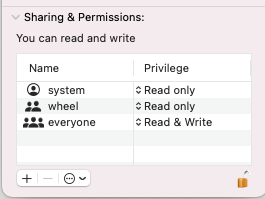 Make sure to reset the permissions afterwards again.

You can enable the root user via System Preferences. No need to log out or boot into single user mode. See: Typo in /etc/pam.d/sudo and cannot recover from it

Another alternative is to enable Root user ( https://support.apple.com/en-us/HT204012 ) and login with it. Then you will be able to edit the file from finder.

Not the answer you're looking for? Browse other questions tagged osx sudo pam or ask your own question.

3
Cannot recover from typo in /etc/pam.d/sudo