How can I set up a usb printer as a network printer using a linux server?

Basically right now I have a USB only printer, it's very nice. There are 5 people in my household and we all are constantly wanting to use the printer.

Windows has a built in way to share the printer, but this only works when the computer is on. I have several low power small machines that I use to run Ubuntu Server Edition.

Is there an existing Linux application that would allow me to basically use the USB printer as if it were a networked printer?

Also I don't know how possible this would be but if there were a way to run the Apple AirPrint server on the Linux box too that would be awesome, then we could all print from our iDevices as well.

ubuntu printing
share|improve this question
edited May 26 '13 at 22:37

You can either get a little wireless/USB device that will share the printer out via wireless. You then connect to it using IPP such as ipp://<ip address of wireless bridge>/USB_queue.

A device such as this would be up to the task: NETGEAR PS121 USB 2.0 Mini Print Server.

We use such a device where I work. This particular device presents the printer over the network using LPD, so we access the USB printer attached to it like this:

You can attach the printer to a PC like normal, and then using CUPS share that printer out over the network. Again users can access the printer using IPP such as ipp://<linux host w/ printer>/<name of printer.

Additionally if you setup Samba, you can share the printer out using Samba to Windows PCs as well as Linux systems instead of IPP.

Once you've got the printer detected on a Linux host you can either access the printer configuration GUI from the pull downs or from a terminal:

This will bring up the following dialog: 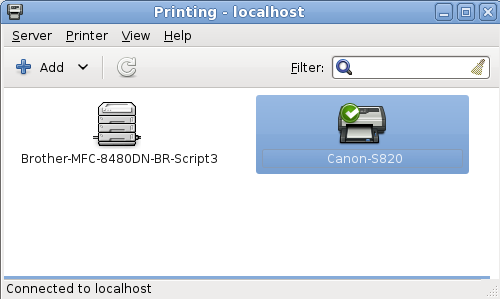 Here you can see that the USB printer is detected by the lost Linux host and is working correctly: 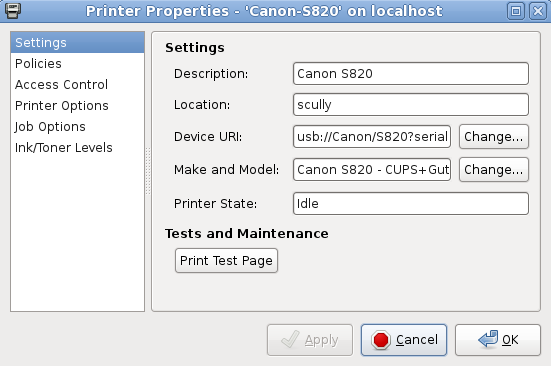 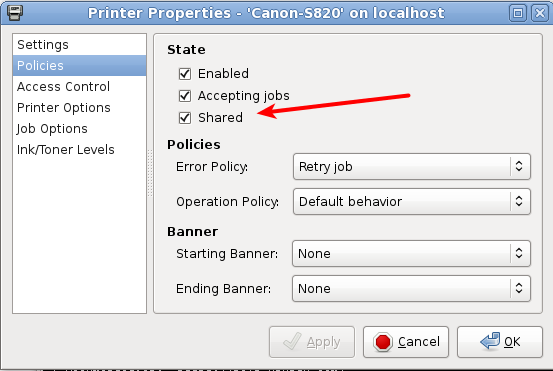 Now on a client you select the printer like so: 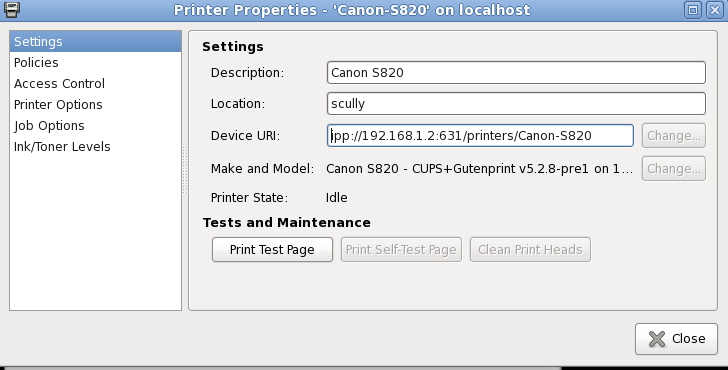 Not the answer you're looking for? Browse other questions tagged ubuntu printing or ask your own question.

8
How to avoid powering down certain USB devices when a machine is suspended
4
Point USB phone to specific /dev/ttyACM using udev
3
How do I set up a PostScript print queue to share a PCL laser printer and add PS fonts?
3
Replacement to CUPS Browse Protocol
3
Can I print via CUPS on ARM device without drivers by installing CUPS onto an x86 server with drivers?
7
LPR or CUPS print to Airprint printer
4
How to set cups to use all paper trays on a printer?
2
Make KVM/libvirt wait for network mount before starting guests