How to blacklist a correct bad RAM sector according to MemTest86+ error indication?

What should I specify in the memmap kernel parameter to bypass this area?

I've tried running memtester 770MB and it says everything is ok so it doesn't look that the MemTest's indications means an error in the 759.5th MB from the start.

How to interpret this MemTest indication to configure memmap?

I have no money to buy new RAM now and the error seems to be single so I hope I can just override it.

There is this tutorial titled: Bad Memory HowTo which discusses disabling memory via the kernel using the memmap argument to the kernel. According to the howto you have 2 options when it comes to memmap:

With the first option, if memtest reports that there is bad memory at 600M then you could disable the RAM from that point up until the end of RAM with this:

NOTE: This will blacklist the 10M after the 800M base address. You should run memtest86+ afterwards to confirm that this argument is correct.

There is a patch available for Ubuntu called BadRam. It's covered very well here in this post titled: BadRAM on the Ubuntu Community site.

After applying the patch to the kernel using the details from that page you make modifications to your Grub2 setup:

excerpt from that site for Grub2

The GRUB2 config file in Natty has a line for configuring kernel bad ram exclusions. So, I will assume that is the preferred way of mapping out a section of memory that is showing errors. The line I set was

The suggested way on every web site I could find was to set this was to run memtest86 and let it show you the BadRAM settings. memtest86 gave me a page of stuff I would have had to enter. I could see that all the addresses were in one 16K block, so I just wanted to map that 16K block out of action. Here is how I generated the correct entry.

The first parameter is easy. That is the base address of the bad memory. In my case, I could see that all the bad addresses were greater than 0x7DDF0000 and less than 0x7DDF4000. So, I took the beginning of the 16K block as my starting address.

The second parameter is a mask. You put 1s where the address range you want shares the same values and 0s where it will vary. This means you need to pick your address range such that only the low order bits vary. Looking at my address, the first part of the mask is easy. You want to start with 0xffff. For the next nibble, I will explain with bit maps. I want to range from 0000 to 0011. So, the mask for badram would be 1100 or a hex c. The last 3 nibbles need to be all 0s in the mask, since we want the entire range mapped out. So, we get a total result of 0xffffc000.

After setting this line in /etc/default/grub, I ran sudo update-grub and rebooted and my bad memory was no longer being used. No kernel patches are needed to map out bad memory using this method.

Looking through the wikipedia page for memtest86+ it states as follows:

Starting from Memtest86 2.3 and Memtest86+ 1.60, the program can output a list of bad RAM regions in the format expected by the BadRAM patch for the Linux kernel; using this information, a Linux system can reliably use a RAM module even if it has a few bad bits. Grub2 is able to supply this same information to an unpatched kernel, negating the need for the BadRAM patch.

Also I came across this Gentoo page which specified the memmap=... using a hex address, so you could specify it like this:

The 5M is just a guess, obviously you could adjust it lower or higher depending on how much RAM around that region you want/need to omit.

Finally you can specify the size in hex as well:

The output will change from a list of individual test failures to a series of badram= lines, each containing one more new bad sector. Because the lines append and coalesce adjacent segments you can just run the test headless overnight and use the final printed line (though if you have a really bad dimm the less-accurate "5 megs around this point" format will likely be quite a bit shorter). 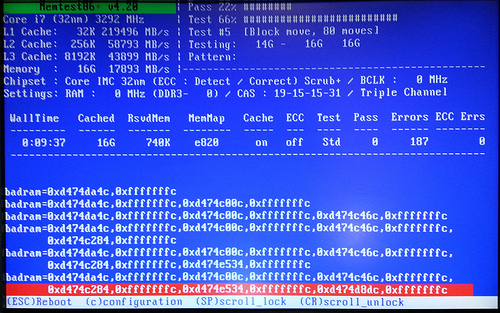 Very dirty and very nice work-around: run a user space memtester, wait until it finds an error. Let it, for example, at 0xfce2ea31 .

Then run again memtester, but on that physical address, so:

To be sure, it is better if you sacrifice more than the page of the problematic address. Here we sacrificed 64kByte around the faulty address.

If all went well, it will find the faulty memory location, far more quickly, again.

Consequence: until the memtester process is suspended, it won't take away more resource, but no other process will be able to access the faulty memory. Because it will be allocated by the memtester.

Particularly useful on big, remote servers. The suspended process can stay until the new RAM is not shipped. Or maybe until the next christmas, when a downtime won't be so big problem.

Starting with Linux 2.6 you can build your kernel with CONFIG_MEMTEST=y

Booting with "memtest" on the kernel command line will then run a quick test of system RAM on every bootup and automatically exclude obvious bad spots.

This won't catch everything since memtest86 is a lot more thorough and runs multiple passes, but it will likely work in the majority of situations, and has the advantage of not requiring manual intervention should you lose another few sectors.

Not the answer you're looking for? Browse other questions tagged linux kernel memory ram or ask your own question.

-1
How to prevent certain memory location to be accessed
7
Random restarts caused by a machine check exception
9
Does kernel: EDAC MC0: UE page 0x0 point to bad memory, a driver, or something else?
2
badram kernel parameter not working?
2
Entire Harddrive to linux swap
2
Issues with grub badram
0
How to get the mapping between physical and virtual memory page addresses in Linux/Amd64?
1
Disable corrupted memory

8
How to find out which file is affected by a bad sector?
1
How to get a correct error code from curl when transfer was closed before getting the whole file
7
Does this line in a log mean that I have a bad RAM sector or chip?