I've had to download and install a version of a library from its source code repository. The problem is is that other packages from the Kubuntu package manager require this library to be installed. Right now I'm working with ffmpeg, but I've had to do it before (e.g. OpenCV) and I'm looking into the best way of doing this for the future...

So what I'm trying to do is create a debian package that I can install with dpkg using checkinstall. I've since decompressed the deb file to modify it trying to get it working correctly

The problem is, ffmpeg is split into multiple packages in the package manager and I don't want to have to write the 5/6 packages to replace each and every one if I don't have to. I have made sure it is properly compiled with everything that is required for all these packages. 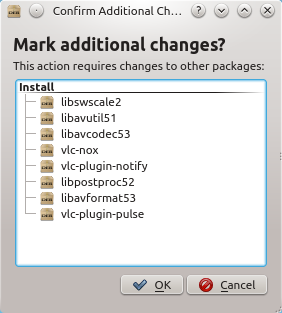 Here's what's written in my deb control file. As far as I can see, this is all recognised in the muon package manager.

And here it is installed in the package manager: 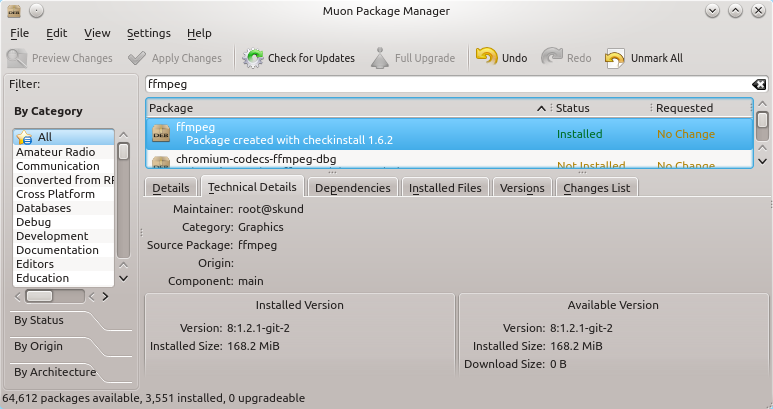 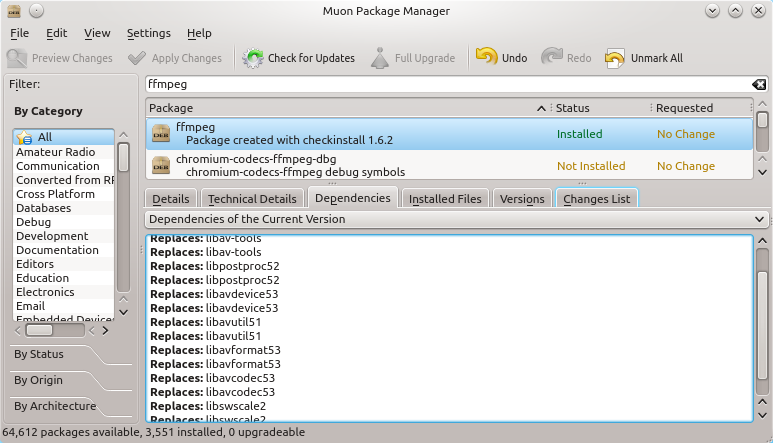 Does anyone have any ideas on getting this working?

Well, for one thing, Provides: does not work with dependencies that specify a version. From the Debian Policy Manual, "Virtual packages - Provides":

Dependencies on libraries are almost always versioned. So that's just not going to work.

Not the answer you're looking for? Browse other questions tagged ubuntu package-management dpkg kubuntu or ask your own question.

5
listing packages in Debian, a la `dpkg -l`, but including the package origin/source
2
Installing Audacity - Package Problems
3
How to remove a package built from source that has the same name of another package?
1
Debian package created by checkinstall overwrites a config file in /etc/default
2
How do I tell aptitude that a package was installed manually?
1
How to use apt to install specific packages from within Debian Installer?
2
Apt refusing to install kernel firmware package from Debian backports
1
Package manager says I have the latest version but there is a newer one
1
How to get list packages installed in debian instance as an offline install for another machine
0
Manage manually compiled ViM (Debian)