A script's background process is still alive after closing the terminal

This is more of a process management/signal handling question than a Bash question. It just uses Bash to explain the issue.

I'm running a Bash script in which I run a background process. This is the script:

I do NOT run the script itself in the background. Simply ./script.

This is a scheme I draw to illustrate the issue. The scheme, along with the description above, can be wrong as I'm sure I do not understand the subject well enough. Please fix me on that if it is truly the case. 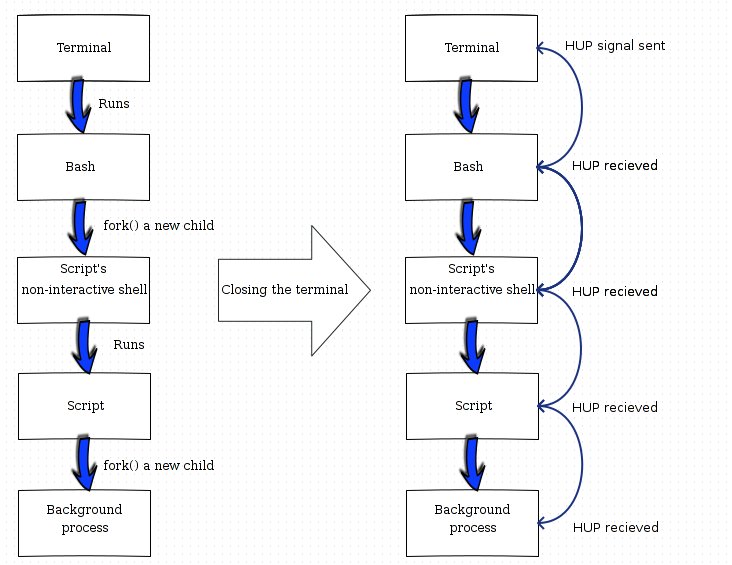 I want to know why the background process is not being killed after closing the terminal, as if it was invoked by an interactive shell like that:

I'm not sure but I guess that the answer to my question lies in the fact that Bash fork()s a non-interactive shell to run the script which might have a different set of rules for job control and signal handling.

So what does the man page tell us about huponexit?

If the huponexit shell option has been set with shopt, bash sends a SIGHUP to all jobs when an interactive login shell exits.

EDIT: Emphasizing that it is a LOGIN shell.

Not the answer you're looking for? Browse other questions tagged bash terminal signals process-management disown or ask your own question.

15
Start a background process from a script and manage it when the script ends
4
Starting an interactive shell as an asynchronous process (signal delivery)
0
How do I run a process and send it a SIGNAL while its running?
1
Why putting a background job into a script can make the job survive termination of the script and the caller of the script?
1
In bash, a process group is a job if and only if …?
0
Background process (postgresql) receiving SIGINT from Ctrl-C in shell
4
Does ` (sleep 123 &)` remove the process group from bash's job control?
3
What determines whether a script's background processes get a terminal's SIGINT signal?