What are the origins of rgb.txt?

Where did the list of X11 color names come from? Every resource I've found online claims the origin is unknown, but it must be recorded somewhere. The best information I've found was in an archived discussion page at Wikipedia's Wikiproject Color:

The X11 color names were designed (...) by computer scientists making things up as they went along.

Is there anything more substantial about the origins of the X11 color names?

The ones used today is mainly from release X11R4. See below. That is: not only by name but also by definition.

Looking at Wikipedias entry on X11 color names it states that they were defined by Bob Scheifler of MIT's Laboratory for Computer Science. As he lead out the birth of X back in 1984 that is probably correct – but the reference has no such claims.

Looking at one of the first releases, X.V10R3, another name pops out when looking at the code, namely Tony Della Fera of MIT Laboratory for Computer Science, Digital Equipment Corporation (DEC) and Project Athena.

In the following release, X.V10R4, he is also credited in the man pages for e.g. X and xload.

Anyhow is it rather safe bet to guess Bob Scheifler had at least a big part in compiling the list given his role in the core start.

But; that does not mean he or they actually coined the names. It could also origin form the Ultrix Window Manager as it got included in X. It at least uses color naming like Aquamarine, MediumSeaGreen etc.

The colors for release (Dates from here):

are the same. 69 colors given by lowercase separated words and upper camel case.

Yes, gray was by two names. From notes it also seems some people was happy about this because they always forgot if it was grey or gray – ref. xfd change suggestion by HP Labs:

101 shades of gray was also introduced. Going from

That would mean, as both grey and gray was used – 202 new names.

Gray variants was used earlier as well but then mere in the form of:

and various shades dynamically generated in C, and bitmaps such as gray3.bitmap:

Then by release 11R4 came a major change (X11R4/mit/rgb/others/README) by the hands of Paul Raveling at Information Sciences Institute (ISI) of the University of Southern California and John C Thomas at Tektronix, Inc. Oregon (at least).

They removed two and added 376 new colors but also redefined almost all colors. These values are what stands today. A few has been added later.

Thomas, funny enough, among other things, did tuning by going trough 72 Crayola crayons. Paul Raveling then did further tuning using his own HP monitor.

The README speaks for itself. 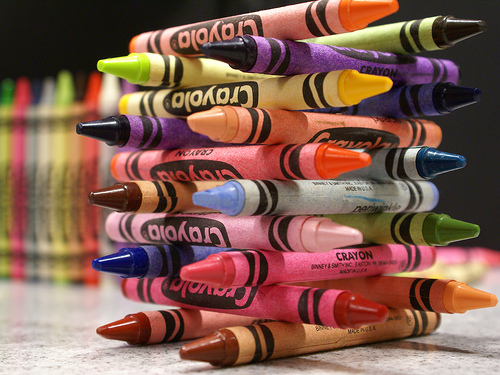 Not the answer you're looking for? Browse other questions tagged x11 colors history or ask your own question.