Spike in number of page faults with make -j`nproc`

I am running a benchmark to figure out the number of jobs I should allow GNU Make to use in order to have optimal compile time. To do so, I am compiling Glibc with make -j<N> with N an integer from 1 to 17. I did this 35 times per choice of N so far (35*17=595 times in total). I am also running it with GNU Time to determine the time spent and resources used by Make.

When I was analyzing the resulting data, I noticed something a little peculiar. There is a very noticeable spike in the number of major page faults when I reach -j8. 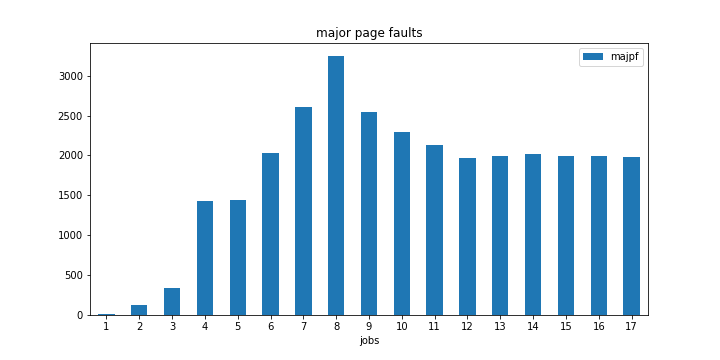 I should also note that 8 is the number of CPU cores (or number of hyper-threads to be more specific) on my computer.

I can also notice the same thing, but less pronounced, in the number of voluntary context switches. 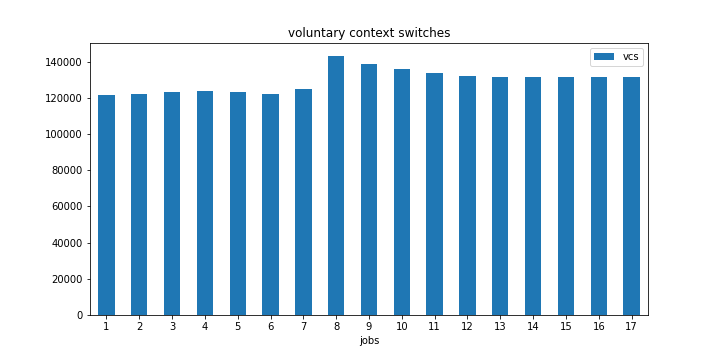 To make sure my data wasn't biased or anything, I ran the test two more times and I still get the same result.

What is the reason behind these spikes?

EDIT: I've done the same experiment again on a 4 cores PC. And I can observe the same phenomenon, at the 4 jobs mark this time around. 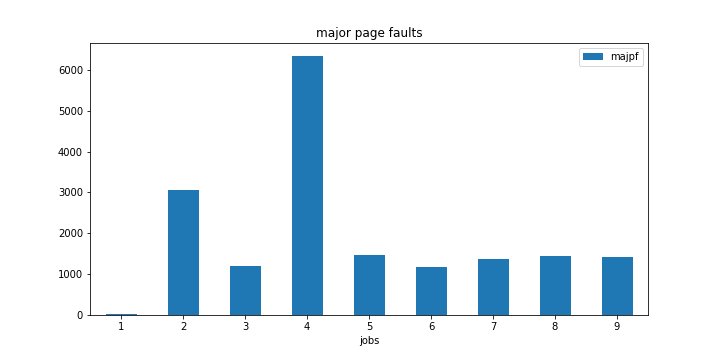 Also, notice the jump in major page faults in the 2 jobs mark. 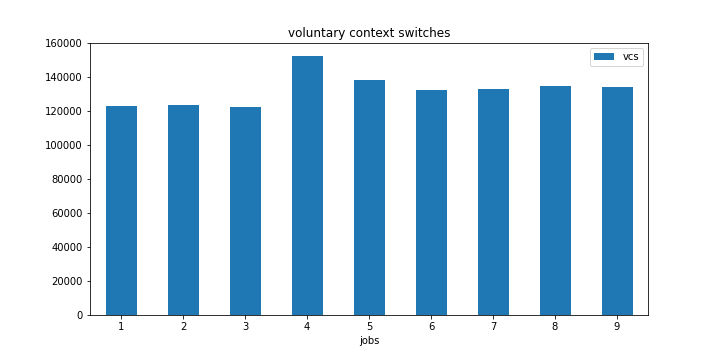 @FrédéricLoyer suggested comparing page faults with the efficiency (inverse of the elapsed time). Here is a box plot of exactly that: 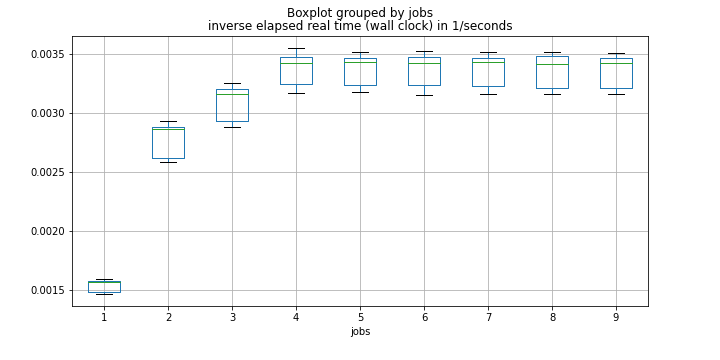 We can see that the efficiency is getting better as we go from 1 job to 4 jobs. But it stays basically the same for bigger numbers of jobs.

I should also mention that my system has enough memory so that even with the maximum number of jobs, I do not run out of memory. I am also recording the PRSS (peak resident set size) and here is a box plot of it. 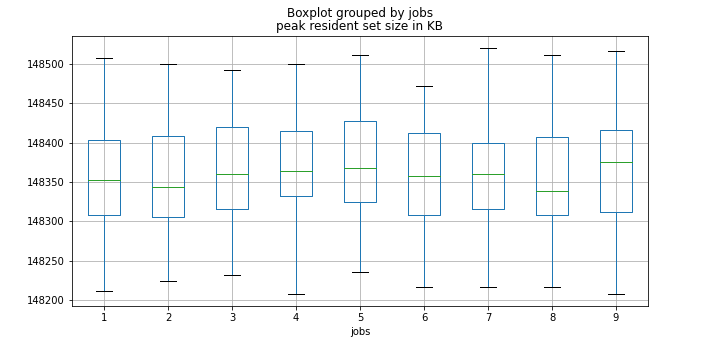 We can see that the number of jobs doesn't impact memory usage at all. 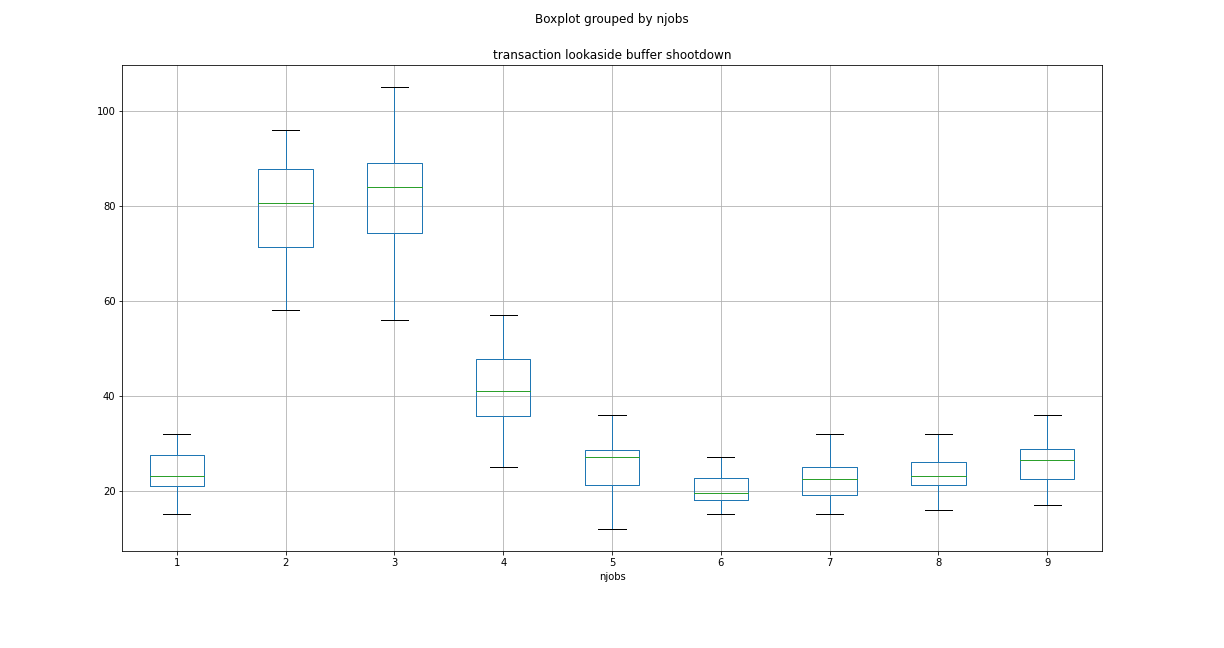 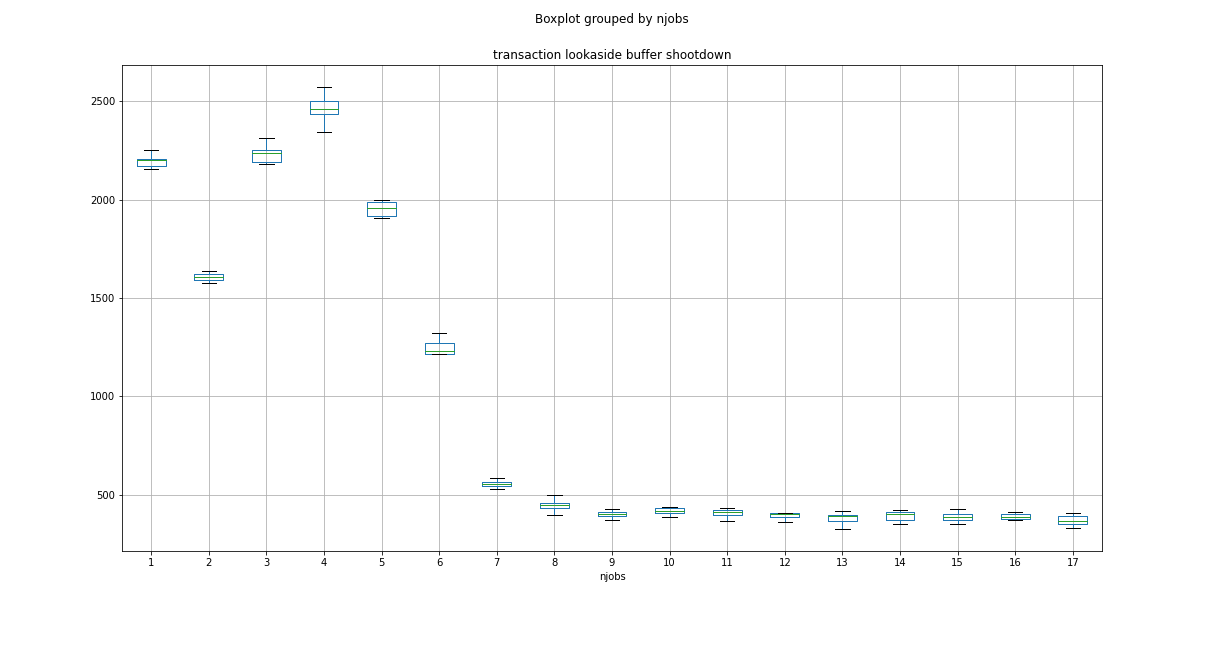 Because your graph showing the global efficiency provides the correct answer to your quest, I'll try to focus on explanations.

Theoretically, (Assuming all CPUs idle at make launch time and no other task running and no i job has already completed when launching the n-th > i), we may expect CFS to distribute the 1,2,3,4,5,6,7,8 jobs to CPU 0,2,4,6 (because no benefits from cache sharing) then 1,3,5,7 (still no benefits from cache sharing but because of cache being shared between siblings, increase of lock contention hence negative impact on global efficiency) Could this be enough to explain the lack of improvement of global efficiency starting from job 5 ?

As explained by Frédéric Loyer, major page faults are expected at job launch time (due to the necessary read system calls). Your graph shows the increase is almost constant from 5 to 8 jobs. The significant increase at -j4 on your 4+4 core (corroborated by the significant increase at -j2 on your 2+2 core) appears to me more intriguing. Could this be the witness of the rescheduling of one job's thread on whatever > 4 cpu because of whatever sudden activity of some <=4 cpu caused by whatever other task ? The constant amount of page faults for -j(n>8) being explained by the fact that all cpus that can be elected have already the appropriate mapping.

BTW : Just in order to justify my request for misc. mitigations info in OPs comments, I wanted to first make sure that all of your cores were fully operational. They appear to be.

When make launch a process, the memory of the process is mapped to its files (executable, libraries). Then it is expected to see page faults. The more efficient the system is, the more page faults we can expect. It could be interesting to compare page fault rate with the efficiency (inverse of the time spent by make).

We can also have page faults when the system has not enough RAM and exchange data from/to the HDD. Here it is not a sign of efficency.

Not the answer you're looking for? Browse other questions tagged linux scheduling virtual-memory multithreading gnu-make or ask your own question.

4
What is the connection between jiffies and IPS? How to convert jiffies to IPS?
4
About mem and vmem
2
Generate major page faults
2
Why does my process take too long to die?
3
How to deal with high number of page faults?
3
Is virtual memory always available?
1
When running multicore jobs, will I lose performance if system load averages above the number of cores?
0
How many page faults does this program need?
16
How does memory mapping a file have significant performance increases over the standard I/O system calls?