Linux kernel is not finding the initrd correctly

I had compiled a linux kernel and I wanted to debug it in QEMU. I created a file to boot from by doing the commands

Then I did qemu -kernel bzImage -initrd disk.img and got the screen below which says: 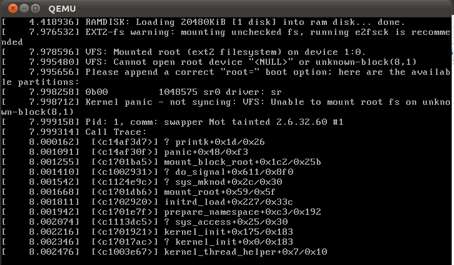 What have I done wrong and what can I do to fix it?

The kernel is telling you, that it doesn't know which device holds the root file system. Your loop mount isn't necessary. (Unmount it before continuing).

The -hda disk.img parameter tells qemu to simulate a disk device based on your disk.img.

What's happening is that you're trying to boot Linux in the "Obsolete" way. That is where the initrd is a ramdisk as opposed to a compressed cpio archive unpacked by the kernel in a ramfs, and with the old way to switch to the end device.

The messages above show that it mounts the ram disk successfully (1,0: 1 is for ram, so /dev/ram0) but not the real root file system /dev/sda1 (8,1: 8 is sd, 1 is a1). Presumably since you didn't specify a kernel command line (-append), that /dev/sda1 comes from a CONFIG_CMDLINE passed at kernel compile time or using rdev.

If your disk.img is meant to contain a root file system of say a small Linux distribution with /sbin/init..., then you probably want to write it instead:

Then, the kernel would treat the ram disk as the real root file system (though you could still pivot_root to another one).

To be able to see the kernel messages more easily, I'd recommend using serial output:

As an alternative you could use an init ramfs instead of an init ramdisk:

(provided busybox is the statically linked version) and you'll get a shell and other busybox utilities in that kernel).

Note that the kernel now runs /init as opposed to /linuxrc or /sbin/init in that mode.

This kernel config option is also required. It enables initrd support on the Linux kernel.

Luckly Buildroot sets it by default for us when BR2_TARGET_ROOTFS_CPIO=y is given.

You then pass the CPIO to QEMU with the qemu -initrd option. My full QEMU command is:

Not the answer you're looking for? Browse other questions tagged linux-kernel qemu initrd or ask your own question.

9
How to populate /dev directory when building my own initrd?
0
Having difficulties mounting a rootfs for an embedded Linux
2
Why does boot from SD card with my custom kernel result in "VFS: Cannot open root device"?
0
Qemu - Emulate own system to test kernel modules
1
Kernel panic while installing Fedora 28
1
Creating a raw img file of linux system
0
Unable to mount root fs