I have a shell script which logs the performance of various programs passed to it as arguments, to help me choose the most performant one. The relevant snippet:

It's supposed to be run on the command line as follows:

...for instance: suppose I want to compare the performances of xip.py, foo.py, bar.py, bas.py, qux.py--the net content of the working directory--and run them each for 50 times before generating the stats; I'd invoke the script as:

I think I am missing something obvious here, but when I invoke this script as bash $HOME/bin/perf ... everything works as intended. However, the following two invocations fail (error attached): 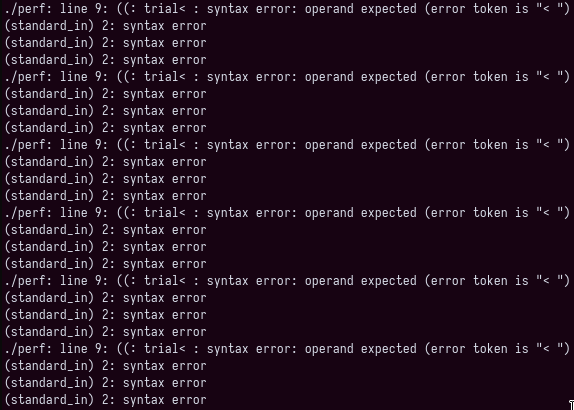 changing the shebang to /usr/bin/env bash solves this problem, but /usr/bin/sh points to /usr/bin/bash on my system.

You are running the script with sh as the interpreter, but you are using bash features. Even assuming that sh points to bash, you still cannot do this as bash disables many of its custom features when asked to run as sh.

One solution is to declare the script correctly. You're using bash features so declare it as a bash script.

Or, if you need continue with a dependency on env,

Another option is to remove the bash-specific syntax.

In either case, don't forget to ensure variables are enclosed inside double-quotes when you use them. For example, if one of your unquoted variables (including script parameters) contains a space it will be split by the shell into two or more words.

The error comes when $3 expands to the empty string in

Bash does support for (( .. )) even in POSIX mode, so that in itself is not the issue. In this particular case, the problem is the ${!#} expansion used when calling the function. It can be parsed in two ways.

In a standard shell, it's the prefix-removal operation ${var#word} applied to the special parameter !, with an empty string to remove. Removing the empty string doesn't do anything, but for sake of an example, we could remove one character:

But in Bash, ${!#} is taken as the indirect expansion ${!var}, using $# as the "pointer", giving the last positional parameter.

Bash does support the indirect expansion even in POSIX mode, but there, it treats that corner case in a more standard-conforming way. The documentation actually says this:

Now, since $! contains the PID of the last background process, but the script doesn't start any, the standard meaning gives just the empty string. Leading to the eventual error.

You could also use "${@: -1}" to get the last positional parameter in Bash. It's not standard either, but does work in POSIX mode.

Anyway, in general, if you want to use non-POSIX features supported by Bash, like (( .. )), ${!var}, ${var:n:m}, run bash, not sh. You'll save yourself the trouble of dealing with the incompatibilities.

Not the answer you're looking for? Browse other questions tagged bash shell or ask your own question.

11
Running a shell script when "/bin/sh" points to "/bin/bash"
15
POSIX shell scripts shebang #!/bin/sh vs #!/usr/bin/env sh, any difference?
5
Why does the bash shebang work, but the sh shebang doesn't, for a string substitution
1
#!/usr/bin/env hangs with NAME=VALUE