In Linux, is there a system layer/script that handles the opening of files?

in Linux, is there a layer/script that handles program-requests to open files?

I can't believe an editor can "just open up a file" for read/write access on its own.

I rather imagine this to be a request to a "layer" (init.d script?) that can to begin with only open a certain amount of files and that keeps tabs on open files with their access-kinds, by what processes they are opened etc.

This layer is inside the kernel in Linux and other systems that don't stray too far from the historical Unix design (and in most non-Unix operating systems as well).

This part of the kernel is called the VFS (virtual file system) layer. The role of the VFS is to manage information about open files (the correspondence between file descriptors, open file descriptions and directory entries), to parse file paths (interpreting /, . and ..), and to dispatch operations on directory entries to the correct filesystem driver.

Most filesystem drivers are in the kernel as well, but the FUSE filesystem driver allows this functionality to be delegated outside the kernel. Filesystem operations can also involve user land code if a lower level storage does so, for example if a disk filesystem is on a loop device.

File opening in linux is handled directly by the kernel but there's several things that you can do to influence and study the process. 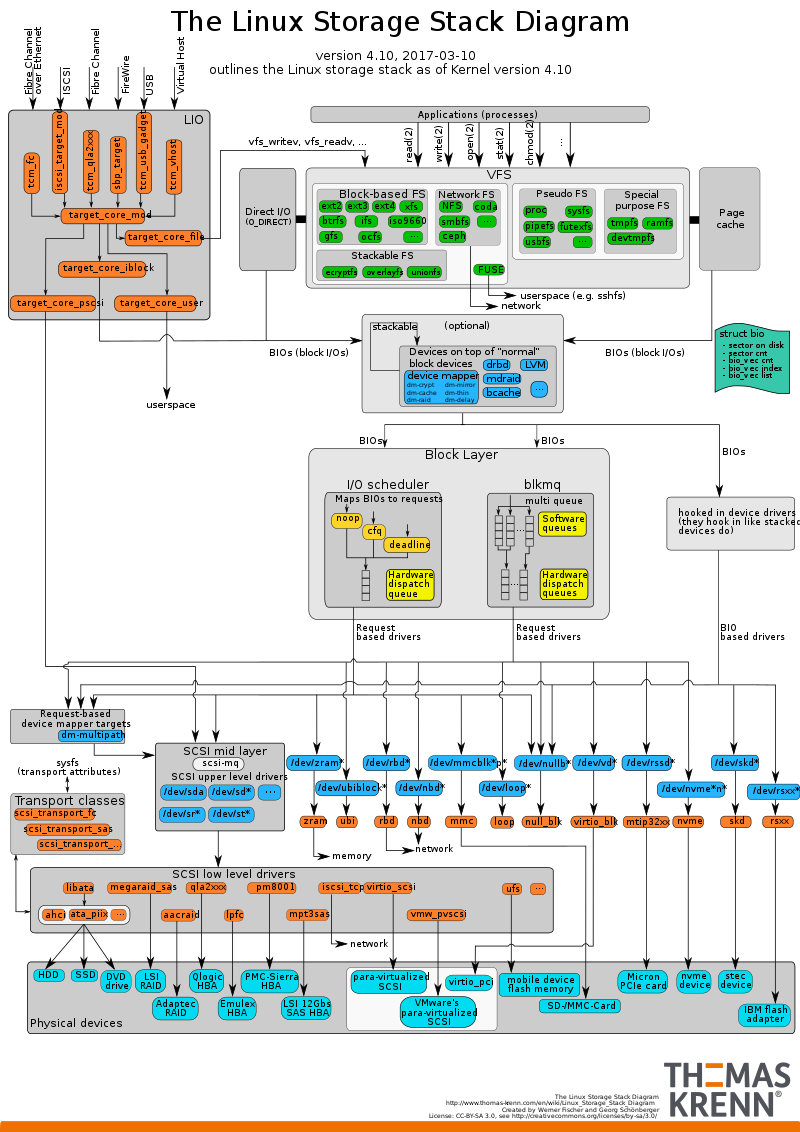 Starting from the top, you can see that the interface applications use to interact with files is system calls.

Open, read and write do what you expect, while stat returns information about a file without opening it.

You can study a program's usage of file-related syscalls using strace:

This analyses the syscalls caused by ls /etc, showing that stat and openat are called on the /etc directory.

You might be wondering why we're calling file operations on a directory. In UNIX, directories are files too. In fact everything is a file!

You might be wondering about the openat() = 3 in the output above.

In UNIX opened files are represented by a file descriptor, which is a unique representation of the open file by a certain process. File descriptors 0, 1 and 2 are usually reserved for the standard streams (user input/output), so the first open file will be 3.

You can get a list of open file descriptors for a given process by using lsof (list open files):

The FD column shows you the file descriptor number, along with the access.

You can also use fuser to search for processes that hold particular files:

By now you might be wondering: but how does lsof know which files are open in the first place?

So lsof knows knows which files are open by... reading more files! Specifically, the directory /proc/3242/fd. Everything under /proc is a "fake" filesystem kept by the kernel. You can ls -l it to see it's structure.

There's several methods you can use to influence file opening, although they aren't as easy as just replacing some script.

If you're looking to change the way files are stored or accessed, like providing encryption, caching it, spreading it across multiple disks, or something similar, there's a good chance that there's already a existing device mapper that suits your needs.

If you want fine-grained control over file opening in a particular directory / mount, you can write a simple FUSE filesystem and mount it.

At the program/process level, you can use LD_PRELOAD to change the C library calls and prevent them from doing the normal syscalls.

The hardest but most flexible way would be writing your own filesystem driver.

Managing access to files is about the first and most important function of an operating system. DOS, which is one of the oldest operating systems on personal computers, means Disk Operating System. It allowed programs to directly access hardware for the most part, but not so for accessing files. Programs had to use DOS calls and DOS would manage putting data in and out of files for the program. Only disk utilities would access the hard drive and files directly under DOS.

Modern protected mode operating systems like Linux handle accessing files like DOS does, but they also require every access to anything outside of the program itself (or any other program that it has been configured to share memory with) to go through the kernel (Linux is a kernel).

Your program on Linux may call a function in the C library to read or write data to a file. The C library then does its part of organizing access to the data in the file while still running in the same context as your program. Then the C library will call the kernel (Linux) with the correct function to access a file , which switches the CPU in to ring 0 or privileged mode. The CPU is now running the Linux filesystem driver and hard drive driver software in privileged mode which directly accesses the hardware to access the file. The data is copied to the memory area where the C library instructed Linux to put the data, and the CPU is switched back in to user mode with the security context of your program and the C library resumes and does any processing it needs to do on that data and then returns to executing your program.

In short, this is what happens when a program writes to a file

Here is a quite minimalistic assembly program that writes "Hello World!" to the file greeting.txt:

Save the code to write.s and build using

and then run with

(Note: I don't do any error handling. This is just toy code.)

Not the answer you're looking for? Browse other questions tagged linux files or ask your own question.

11
What is an open file description?
1
How does the OS access files stored on the hard disk?

2
How do I output a count of all files with “tty” in the filename in the Linux directory that holds files on system devices
0
How to get data shown out of workspace or directly from application?
3
How to monitor the opening and closing of files?
2
What is the Linux scsi mid-layer
1
Listing all the files that I have created on a Linux cluster