I am looking for a way of undoing this wipefs command:

while the former structure was:

and the output of that wipefs command (is still sitting on my terminal):

I will quote the wipe and undo parts from there, I want to know if it's sound and I can safely execute it on my server, which I did not yet reboot, and since then trying to figure out a work-around from this hell of a typo:

Just now, I ran the testdisk on that SSD drive, and it found many partitions, but only these two match the original:

Can I / Should I just hit Write (Write partition structure to disk)? If not, why not?

You're lucky that wipefs actually prints out the parts it wipes.

do look sensible to me in general.

But note that the offsets there are different from the ones in your case! You'll need to use the values you got from wipefs.

Based on the offset values (0x3b9e655e00 vs 0x37e4895e00), they had a slightly larger disk than you did (~256 GB vs ~240 GB). Using their values would mean that the backup GPT at the end of disk would be left broken. That shouldn't matter much, in that any partitioning tool should be able to rewrite it as long as the first copy is intact.

But if it was the other way around, and the wrong offset you used happened to be within the size of your disk, you'd end up overwriting some random part of the drive. Not good.

Also, the magic numbers for the filesystems of course need to be in the right places.

I tested wiping and undoing it with a VFAT image, and wrote this off the top of my head before reading your version too closely:

that's for the single wipefs output line (repeat for others):

It probably wouldn't be too bad to automate that further, but what with the risk involved, I'm not too keen to post such a script publicly without significant testing.

If you can, take a copy of the disk contents before messing with it.

In my question with a headline of Undoing wipefs, I chose to re-create partitions using the testdisk, it's probably best for you to avoid it as it took a measurable amount of time (not just hitting Write), before I did so, I must have carefully inspected both partitions - testdisk allowed me to read their structure, I went ahead and read a few directories - seemed Ok.

What I did not think of were the underlying file systems, because it of course did not boot now.

From a live Linux Mint I took a picture of GParted: 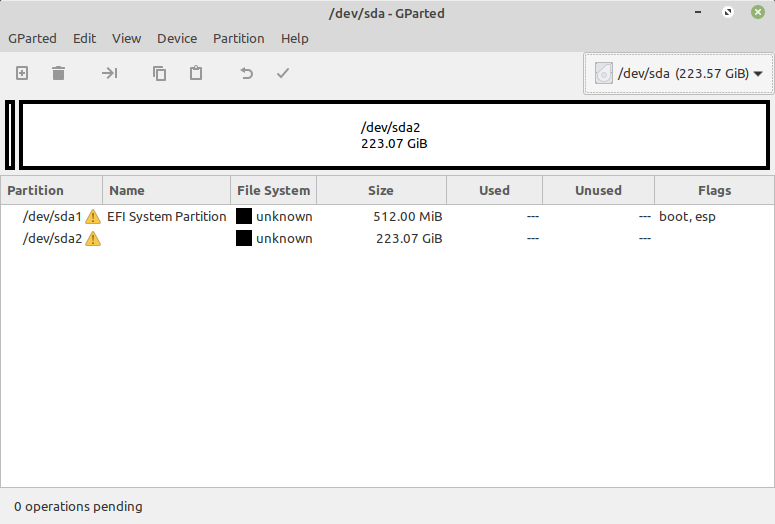 I will repeat that the full output of wipefs command was:

To undo what has been erased, I did:

Now, mountable and can read all of the files.

I rebooted, and SSH'ed into my server without any problem now.

Can I / Should I just hit Write (Write partition structure to disk)?

Only and only if all the partitions are listed.

If all partitions are listed and only in this case, confirm at Write with Enter, y and OK.

Not the answer you're looking for? Browse other questions tagged filesystems partition data-recovery disk gpt or ask your own question.

1
Disk problems prevent me from booting, or set the disk to read-only. How do I fix the disk?
2
Manually cloning a Live USB Arch distro to a VMware virtual disk
9
Recognizing GPT partition table created with different logical sector size
3
How to mount sdb directly or using LVM partitions on sda?
2
Xen domU not resizing disk
22
How to extend logical & extended partition with fdisk
0
can't boot into windows, was removed from grub. somehow