The back story: I built a Xen Dom0 many years ago and installed one VM, lets call it "old guest", running Ubuntu 14. Life is good.

It is now old, so I need a new one, but Xen Dom0 is too old to update also, so I moved "oldguest" off, installed a new Xen Dom0 using Debian 10, and moved the "oldguest" back on. Now I need to build a new VM, call it "newguest" and migrate data. I do so using:

Seems to go ok, I then ssh into the new guest, create a user for myself, and do

Hrm, thats odd, it takes like, FOREVER AND A DAY for apt-get to come back.

I decide to do a non-scientific test and grab a file, I think it could be the net? Ops, do not have wget:

THE ABOVE COMMAND TAKES LIKE 10 MINUTES. I ssh into the vm from another host. CPU load seems moderately high... lets try a different test: I have yet another host connected to the node called "router" in my diagram that is also running linux. I perform the wget:

I go to "oldguest" and perform the same test:

Observations: If I reboot "newguest" and do NOT perform any action on "oldguest", I can get 11MB/s with the same wget test! Hrm, this makes me think it is networking on the Dom0. If I go to "oldguest" and perform the same test I get 11MB/s, BUT, if I go back to "newguest" and run the test again, it drops to around 50-60kB/s.

Note, I have even tried the download from "newguest" and then ssh into "oldguest" while it is running. The instant "oldguest" gets a packat, the speed on "newguest" falls to the floor.

One final note on speed tests:

If I copy/scp a file from "oldguest" to "newguest", I get 60MB/s. So this seems to be an issue with packets traversing Dom0 to "newguest", or a problem in my network configuration.

Steps taken to try to solve:

Rechecked all network configs. Check routing, all guests have the node marked "router" as the default gateway. Checked processes, it seems like I am not CPU bound anywhere.

Rechecked my config against this.

Have read this article on interfaces.

Have read this post, which is actually the opposite of my config.

Note, in /etc/xen/newguest we see:

Update, after reading this page, I have been doing top and network and xentop testing. It does not seem to be a Dom0 bottleneck. See this screenshot during file transfer, there does not see to be any real problem, and xentop shows 1% CPU utilization also. 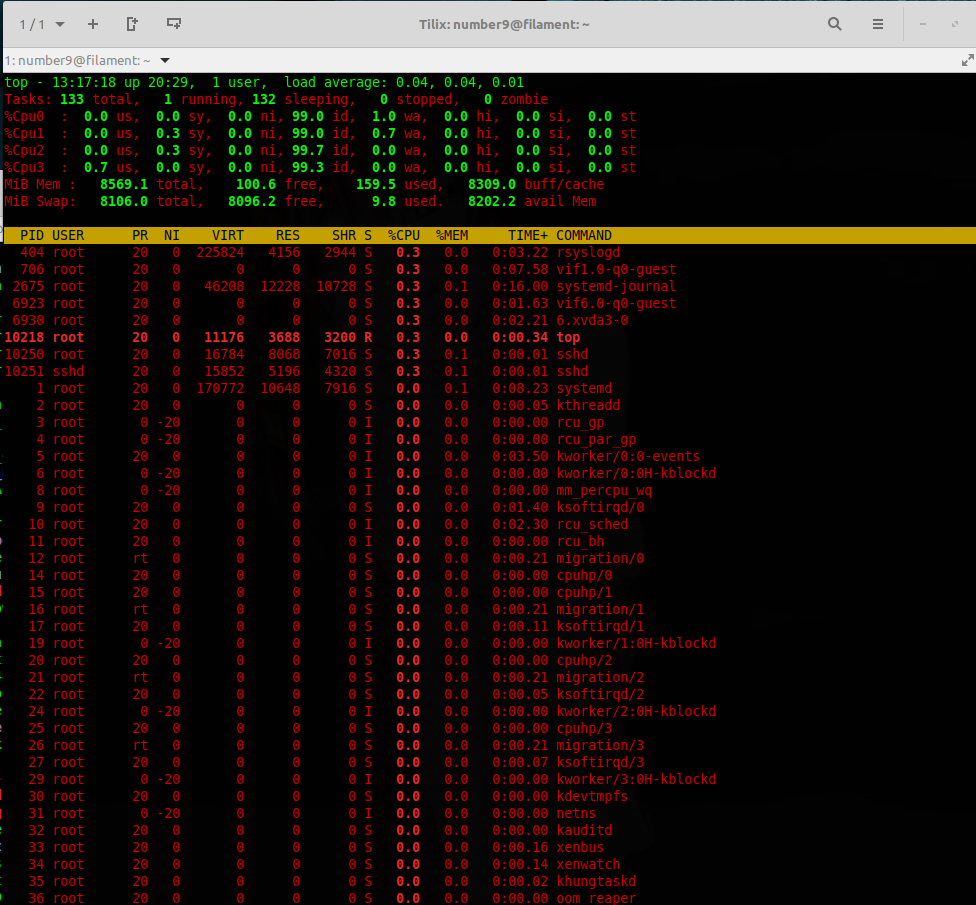 Any help in diagnosis would be great. I am thinking it is the hypervisor, but am not sure what to look at next.

Browse other questions tagged debian xen or ask your own question.

4
no network on domU in network-bridge configuration for Xen-4.0
69
Using ip addr instead of ifconfig reports “RTNETLINK answers: File exists” on Debian
0
host only network xen 4.4
0
Debian wired connection static IP wont connect
0
How do I set additional IP addresses on an existing interface in Debian 9?