How to assign Ctrl + number for changing to a specific language layout in Linux mint 20.1 with Cinnamon?

I use many languages, right now 7 and I don't like to use only one shortcut to move among them in a cyclic way. Because I am simply not using them in a cyclic order :) In Windows, one can assign a specific shortcut for each separately. For example Ctrl+1 for Persian, Ctrl+2 for English, ..., Ctrl+6 for Thai etc. Therfore at any time no matter what language my keyboard is at the moment, I just need to press one shortcut to move to the language that I want (not repeating the shortcut until arriving to the desired language). And I type in several languages in the same text very often, so it is not matter of just using one language at a time. I have moved my old computer from Windows 10 to Linux Mint 20.1 with Cinnamon and I'm kind of insisting to remain on this combination. Now the question is how can I have my Ctrl+number here in Mint+Cinnamon?

All searches took me to only how to assign the cyclic layout changing shortcut. Therefore I'm asking this question here ^_^

One possible solution would be mapping a key shortcut to setxkbmap for each layout. Here is a tutorial on how to set custom shortcuts in Linux Mint. Then you set each shortcut accordingly. 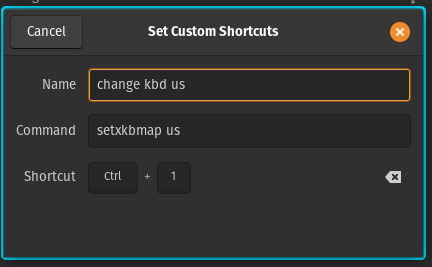 Not the answer you're looking for? Browse other questions tagged linux-mint keyboard-shortcuts keyboard-layout cinnamon or ask your own question.

1
Are Cinnamon themes changing only the the panel?
5
Super + Space as shortcut for layout switching. Linux Mint Cinnamon
15
How to customize window tiling zones/grid?
6
How Can I Disable the Global Shortcut CTRL + SHIFT + U in Linux Mint?
1
How to set country (region) for WiFi globally in Linux Mint 20?
3
Changing keyboard language layout in linux mint doesn't work for second time
0
How to make "list view" the default view in newly opened windows?