Screensharing on bspwm makes the mouse unresponsive on the shared monitor

When I screenshare an entire screen using Discord or Firefox, the shared screen becomes completely unresponsive to my mouse. Stopping the screenshare doesn't fix the problem. Window-sharing works fine.

In Chromium, you can see a tab for screens, and a tab for applications: 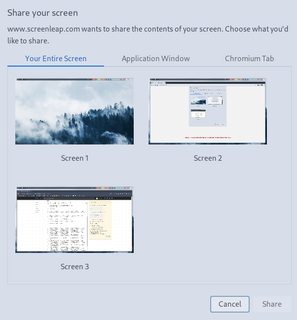 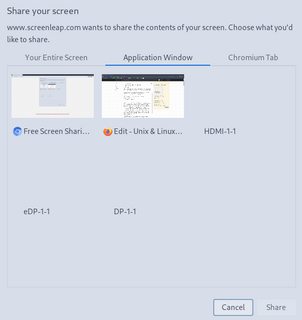 They don't actually show you screens when choosing a screen to share, it shows you applications: 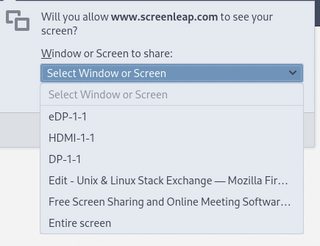 In discord, it works the same way, but the screensharing immediately crashes. The unresponsive mouse problem still triggers on the shared screen.

Running Firefox in a terminal and screensharing outputs the following output when I start sharing:

Using xprop on a window on the frozen screen gives the following output:

If I use xprop on a non-frozen empty desktop, I get the same message (which is expected). xprop seems to think the selected window on the frozen screen is the root bspwm class.

Screensharing with Discord crashes and outputs the following line in terminal when I start sharing:

I have some questions that might help me troubleshoot this issue:

From this Reddit post, we found that the bspwm's focus_follows_pointer option causes the screens to appear as windows in sharing menus when it is set to true.

Those screens should not even appear in the first place. According to this comment by /u/ortango_, sharing them isn't even supposed to work:

Firefox does not support sharing per monitor. those things you think are monitors are not; they only have the monitor's names.

So the problem lies with bspwm, I made an issue here. The reason it works in Chromium is because it uses a newer implementation of libwebrtc. Microsoft Teams probably did the same.

Here are the relevant feature requests I found in Mozilla's bugtracker:

Not the answer you're looking for? Browse other questions tagged linux x11 firefox bspwm or ask your own question.

2
Firefox seems fully loaded, but browser window does not appear for minutes
2
How to start x server on another display?
1
Xinerama misbehaving - drags to wrong screen
3
How to setup x11 touchscreen in linux desktop?
5
Not able to share entire desktop while using google hangouts or appear.in
4
Keep LXPanel on top in Openbox
4
X is misrendering a rectangle around my mouse pointer
3
Firefox context menu placement under dwm
2
Gnome partially stops responding to mouse, keyboard