XTerm only display part of some unicodes and Urxvt displays nothing

In my case, (U)XTerm does display some unicodes, but only partially.

For exmaple: for letters are: 𝒫φϕ𝒟.

Here is a screenshot of UXTerm and Urxvt respectively

It seems that the problem is related to the letter space or letter length.

By the way, everything is fine with gnome-terminal.

My current .Xresources file is:

How to make XTerm and Urxvt to display those characters correctly? Is it possible?

With xterm, the problem is that the first/last characters go outside the bounding-box which xterm reads from the fontconfig metrics. xterm generally uses the system's wcwidth function to get a (more) correct estimate of individual character width, and when drawing characters clips, and the erroneous pixels are lost. By the way, "fixed" is probably not an entry in fc-list output. fontconfig silently uses its default font for this. For urxvt - it's probably simply ignoring the glyph, since it doesn't follow the font-metrics. Some fonts are worse than others; fontconfig doesn't help in this area.

In some cases, the system's wcwidth is not up-to-date to handle some special characters, and xterm will unnecessarily truncate the cell. The sample

uses U+1D4AB and U+1D49F, which xterm and the system agree should occupy one cell on the screen. UnicodeData.txt gives this information:

That N means neutral: if the characters were used in an East-Asian context, an implementation could treat them as "full-width" (a misleading term for double-width). They're not used in that context. However, some fonts are (unsurprisingly) developed by East Asians, and have made most of the neutral characters in those fonts double-width. That leads to surprises. If the terminal (like xterm) clips the character, users are displeased. If the terminal uses the font-width, users are confused (because terminal programs are written for a fixed-pitch grid of rows/columns).

Correcting that problem (and making fonts useful to everyone) is what fontconfig is supposed to do. From xterm's standpoint, the problem is likely in the fontconfig metrics.

xterm does have a way to adapt to narrow/wide choices for ambiguous width characters, but changing the width of neutral characters is not a feature of xterm.

Here is a screenshot showing that gnome-terminal does not clip the characters, nor does it interpret those as double-width. It simply overwrites adjacent characters with the erroneous pixels: 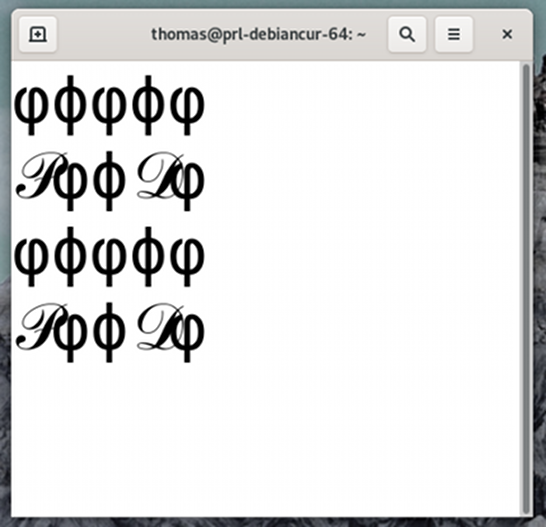 The suggested link to Why doesn't xterm support double-sized characters when using Xft fonts? is for a different problem.

Not the answer you're looking for? Browse other questions tagged unicode xterm rxvt or ask your own question.