I have installed Debian 10.7 OS on Virtual box.

However, somehow it is upgraded to 10.8

Can I know how to downgrade back to 10.7 safely.

10.7 and 10.8 are point releases. They contain nothing but security updates, backported into the current software versions.

Even stable is updated once in a while. Those updates are called "Point Releases". They usually incorporate the security fixes released until the time of the update and fixes for important bugs in the current release. They are prepared by the Stable Release Managers (SRM). As of February 2009 they should happen about every two months.

In fact, the version "upgrade" happens automatically when you update the package cache:

In theory if you still had the archived versions of all the software you installed cached somewhere locally and if you were very careful you could manually downgrade everything back to 10.7, but you'd accomplish absolutely nothing useful and would wind up making your system less secure and stable, not more.

In addition to Shadur's correct answer, I'd like to point out the suite workflow.

In both cases, changes to the package are limited to only what's required to solve the problem. If the original software's author says "it's fixed in the latest version", it's not good enough for a Debian Developer to simply upload the latest version of that package. That developer figures out which line(s) of source code to change to fix the problem and changes ONLY those lines. This ensures that the user experiences no change in the behavior of their system other than what's explicitly intended by the update. The changes are reviewed before they are published.

It's convenient upgrade a bunch of bug fixes at once instead of upgrading one package at a time as they come available and that's what the point-releases represent.

In sources.list, you may have lines which look like this:

If you only have line (1), then you will only update when the point release happens.

If you have (1) and (2), then you will update when the point release happens, and whenever a new security update is published. This is the configuration I suspect most people use.

Note: In Debian 11 (bullseye), the security suite bullseye/updates will be renamed to bullseye-security to improve clarity. 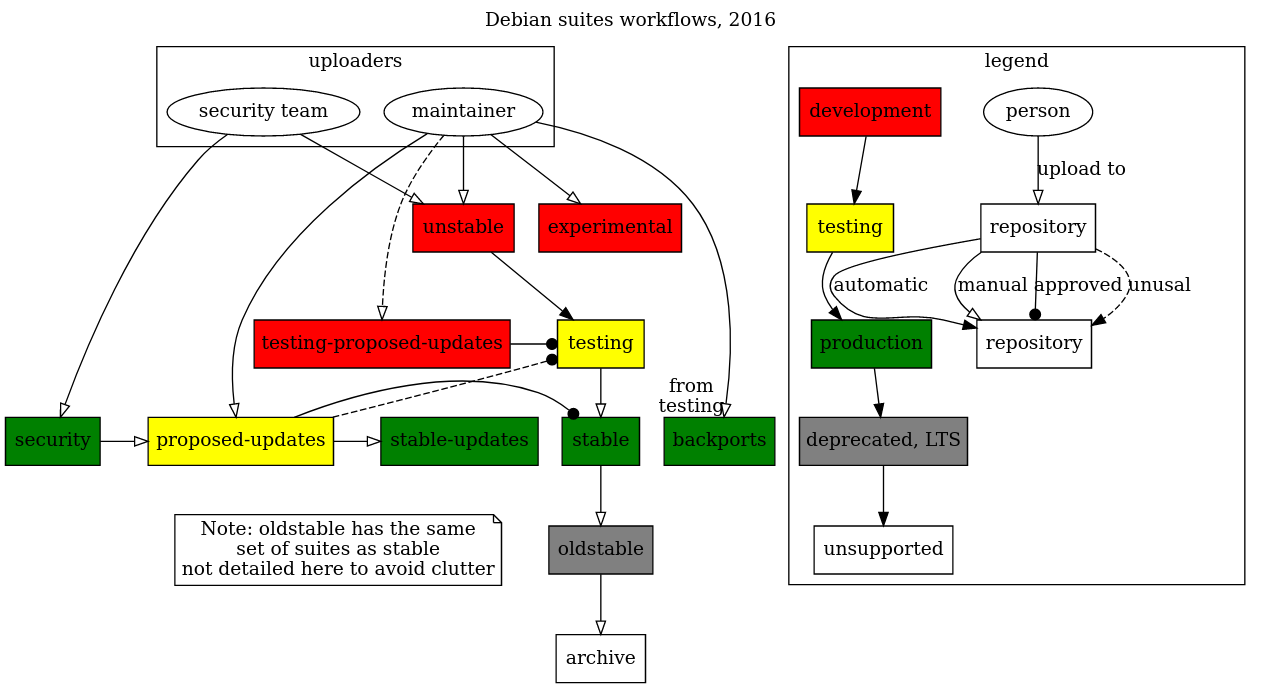 Not the answer you're looking for? Browse other questions tagged debian upgrade or ask your own question.

11
Finding an earlier version to downgrade to
2
Downgrade php version on debian
0
debian from testing to stable but *not* via downgrade
0
How to do a downgrade in debian after doing “apt-get dist-upgrade -t jessie-backports”
0
How to upgrade debian 3.16.0-4-amd64 (Jessie) to any kali linux version?
2
VBox auto resize gone after kernel upgrade
2
Is there a way to downgrade any single package in Debian?
1
How to ensure that a package is correctly installed/updated after “post-installation script: subprocess returned error exit status 1”