Setting up an isolated bridge with NetworkManager

I have a Linux SBC (single board card) that has dual ethernet + wifi. I want to create a bridge using the two ethernet interfaces as slave interfaces. The aim is to use the device to sniff the traffic between two machines. There is also a wifi access point on wlan running hostapd.

The bridge does not seem to be fully isolated from traffic originating from other interfaces.

I would like to use NetworkManager because I like the convenience of being able to switch from one connection profile to another. From time to time I want to bring the bridge down and raise eth0/1 in DHCP to perform system updates. The wifi access point would continue to run unaffected.

My interfaces and MAC addresses are as follows:

(The MAC addresses are spoofed)

I created the bridge as follows with nmcli:

Based on this blog post: Proper isolation of a Linux bridge I created a pre-up hook as follows:

Although I doubt this actually has any meaningful effect.

I have also defined additional profiles (disabled by default) for eth0 and eth1 (regular DHCP). They are shown at the bottom.

The bridge works and is forwarding traffic as expected. However, it is evident that is not fully isolated. In order to verify isolation I connected both eth0 and eth1 to a Cisco managed switch (ports 6 and 7) and I have enabled port mirroring (SPAN) to port 8 on the Cisco switch to copy all packets to a dedicated network interface on my desktop PC, that is running Wireshark so I can see the packets passing through the bridge.

From time to time I see IGMPv3 packets as shown in attached screenshot. Some seem to come from wlan0. I can reproduce this traffic using Scapy on the SBC. PoC code: 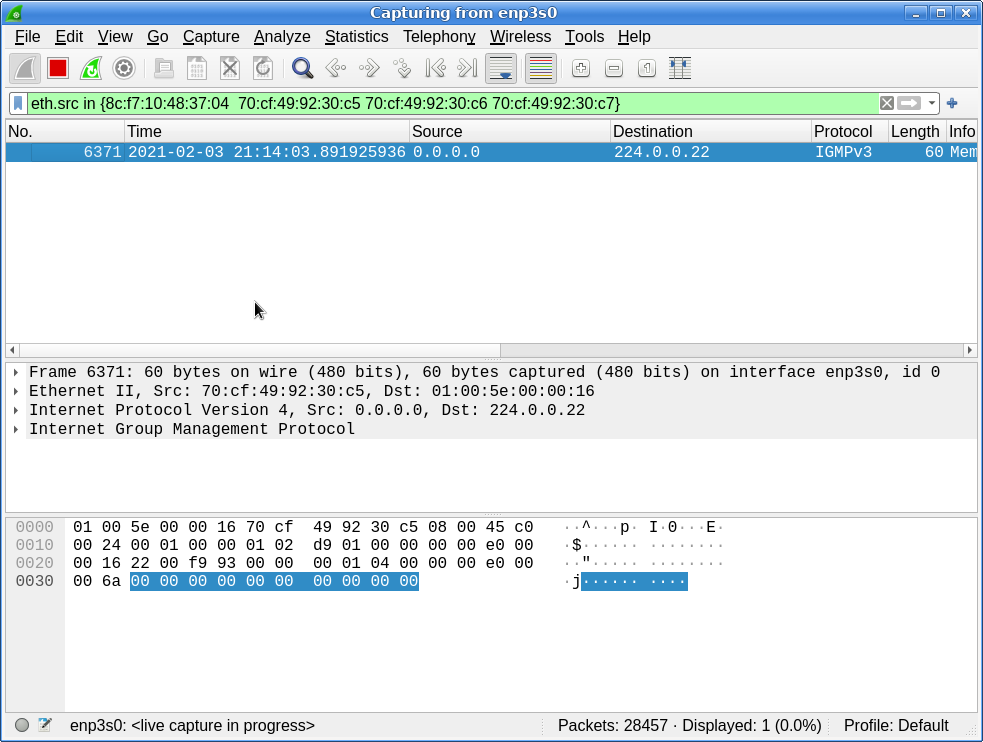 I have a sniffer running on top of the bridge that performs live packet analysis and the traffic flowing through the bridge must not be tainted with traffic from other interfaces.

How can I achieve full isolation of the bridge ? I understand that I could use ebtables to selectively drop packets but am I missing something obvious perhaps ?

Browse other questions tagged networkmanager bridge vlan armbian or ask your own question.

5
Packets not moving through linux ethernet bridge
1
Linux: using a virtual network inside a bridge
2
How to connect 2 virtual bridges so traffic goes from one to the other?
6
Bridged interfaces and VLAN tags
3
Linux VLAN-aware bridges and trunk ports
0
Using VLANs on linux dummy interfaces
1
Setting TCP MSS on a bridge port