I know other questions similar to this have been asked, but I think this situation is a bit different.

System is a Lenovo T430 with 2xSSDs (one is in the optical drive bay).

Original install was Win10 in primary SSD. Added Mint to make it dual boot, all good.

Decided to make it triple boot with Kali on the Secondary SSD - STILL good (Kali picked up both Mint and Win 10).

All worked great until I got the bright idea of installing XP (there’s a reason for it, don’t worry) alongside Kali on the Secondary SSD. I pulled the Primary SSD and put the Secondary in its place. I imaged the original Kali first, then wiped the drive and installed XP. Once I got that going, I installed the newest version of Kali. During the process, it asked if I wanted to force UEFI. I initially said no, and then it seemed to want to wipe the drive, which I obviously didn’t want to do either. So, I said yes, force UEFI. Needless to say, Kali installed, but didn’t see XP (which is fine, I had partitioned them separately so it didn’t overwrite the XP install. I booted to the XP cd, fixed the MBR, and it booted to XP but Kali was invisible. Ok, I thought, whatever, maybe they don’t play nice together. No worries, I’ll just take images of each partition and reimage that drive when I need to use one or the other. Easy peasy.

So, I got the primary and secondary back to original configuration (Win 10 + Mint on primary, XP and unreachable Kali on secondary), wiped the secondary (after imaging the XP and Kali parts separately), and installed Kali again as the sole OS on the secondary. The message popped up again saying “do you want to force UEFI?” I figured hey, I’m using all modern O/S now, so no problems and said yes.

Only this time, it won’t see Windows on the Primary. It sees Mint and boots to it, but not Windows. The partitions look to still be there in gparted. I tried using Win 10 repair, no go. Tried reinstalling Mint, thinking maybe it would pick it up and revert to the original config, but no - Mint fails when trying to write Grub.

So, I’m stuck. I already wiped out The secondary drive so it’s blank (take it out of the equation for now - less complicated).

How do I get Windows back? I know Kali didn’t really eat it, it just overwrote something that points to it. I know it’s there, and I have a lot of things I need on it.

Thanks in advance for any help. I know just enough about Linux to get myself into trouble (clearly), but not enough to say I’m proficient.

Edit: photos are added. It looks to me like SSD2 is GPT and SSD1 is MBR? Also, both are 2.5” SSDs, this laptop is too old for NVMe drives. Thanks! 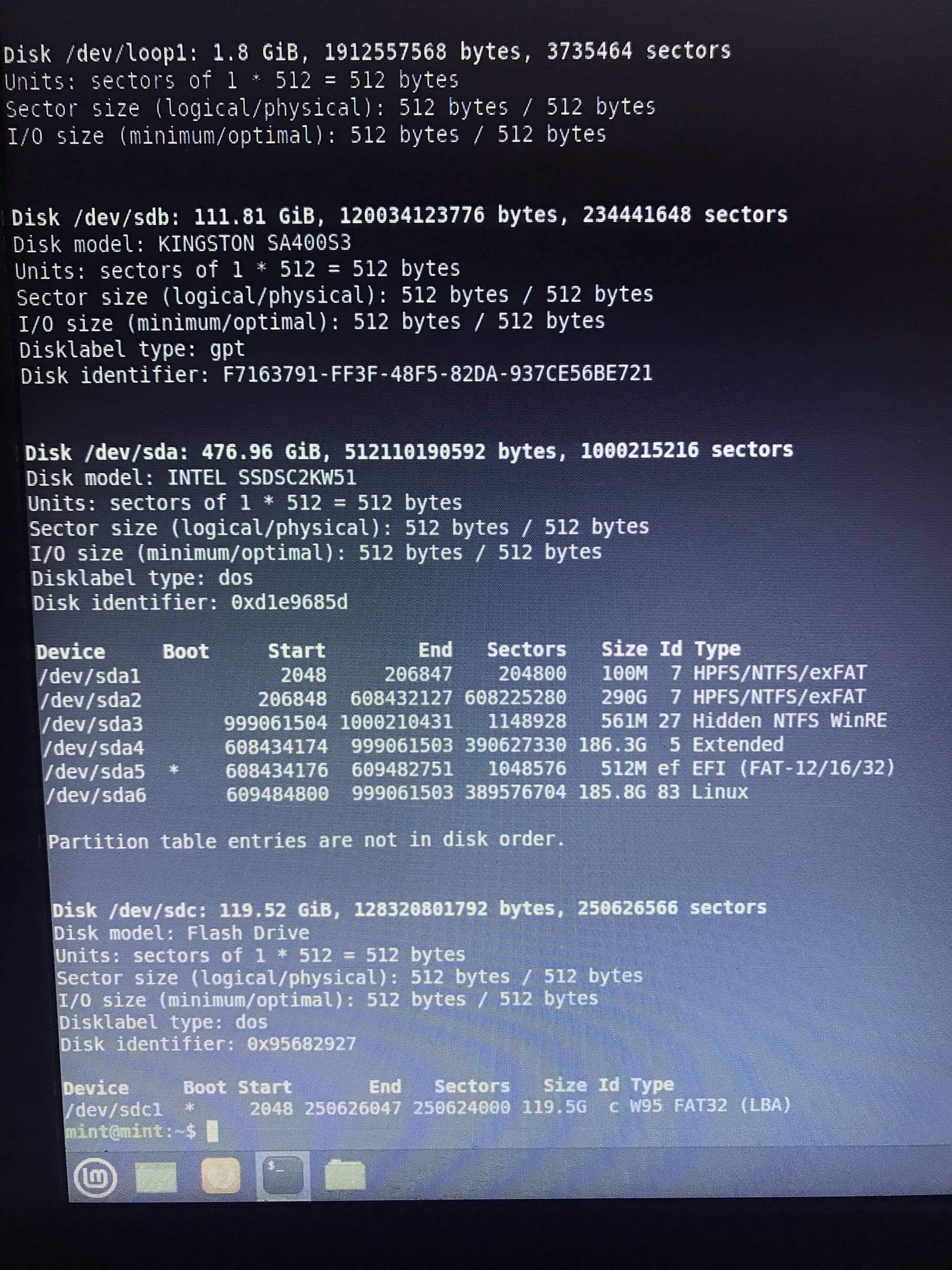 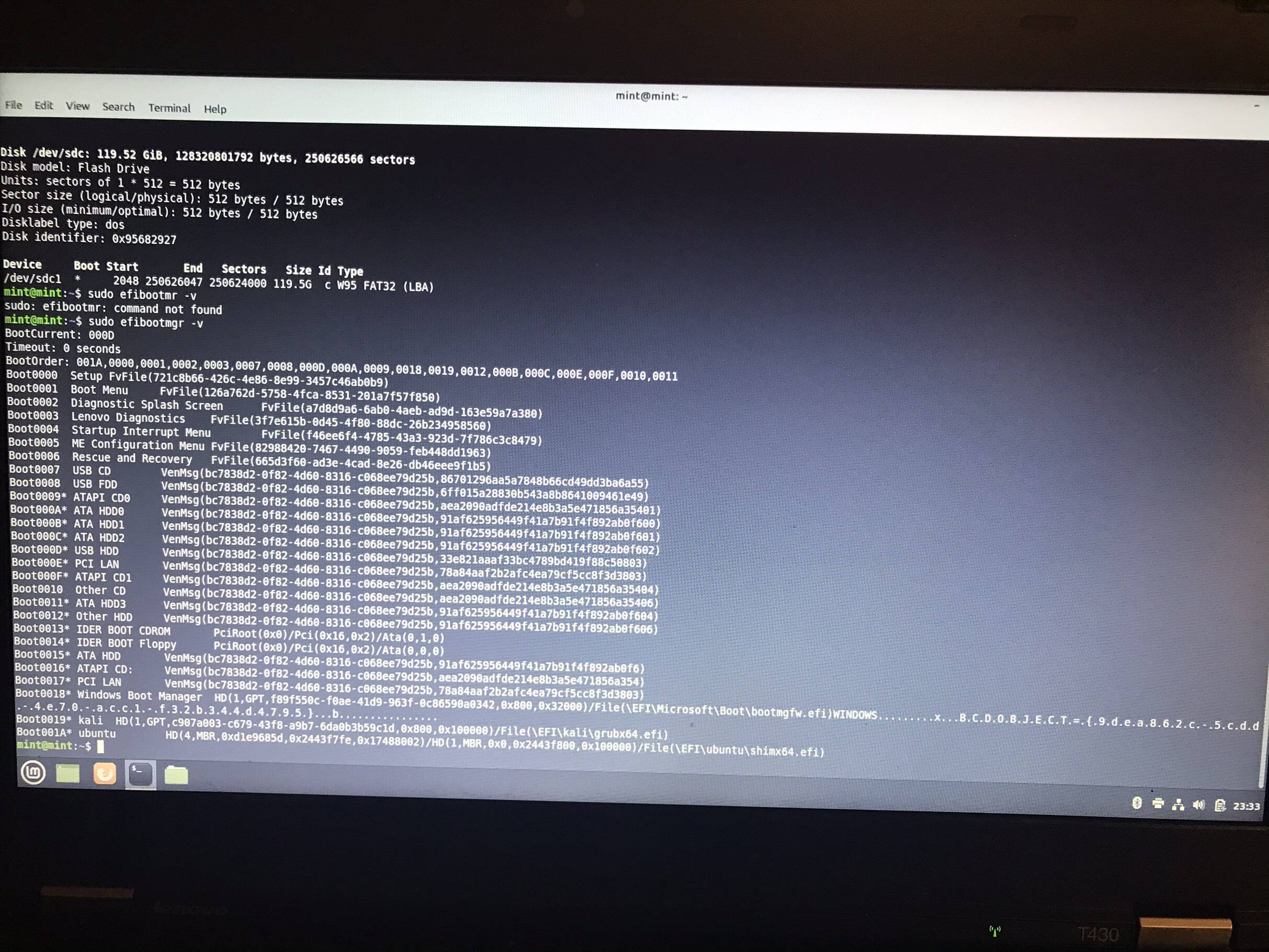 Some laptops or name-brand desktops may offer a simplified BIOS menu with very limited configurability. In these cases, you may have to figure out whether the system prefers UEFI or BIOS, and in worst cases you may have to create OS installation media with the "wrong" type of bootloader intentionally disabled (for USB sticks, delete \EFI\boot\bootx64.efi to make it BIOS-only, or replace the MBR boot code with a valid non-boot MBR to make it UEFI-only).

It sounds like your primary disk is GPT-partitioned and the OSs on it probably use UEFI. To confirm this, please run fdisk -l and edit the output into your original question.

If that's true, your UEFI boot variables may currently be misconfigured and/or the Windows UEFI bootloader (located as /boot/efi/EFI/Microsoft/Boot/bootmgfw.efi as viewed from Mint) may be damaged. Please run sudo efibootmgr -v in Linux to check the current state of your UEFI boot variables and edit the output into your original question, or if it's quite long, e.g. put it into a pastebin site and link it into your question.

The most convenient way to visualize the state of your ESP partition would probably be to run sudo tree --charset ASCII /boot/efi from Linux. Please add that to your original question too. To make it shorter, you can omit the sub-directories of the /boot/efi/EFI/Microsoft/Boot directory, as there are multiple language-specific directories.

Armed with this information, I (or someone else in this StackExchange) will probably be able to help you without resorting to blind guesswork.

On the other hand, the ubuntu line refers to a MBR partition, and the line includes the value 0xd1e9685 which matches exactly the disk identifier of sda.

Either the sda disk was converted from GPT to MBR at some point, or both disks were already present when Windows was installed, and sda was already partitioned MBR-style. But the Windows installer was booted in GPT-style and so it looked for a place to add a ESP partition onto a GPT-partitioned disk for proper UEFI-style boot. So it formatted the secondary SSD in GPT-style and placed the ESP partition and the Windows bootloader within it instead, since it was probably completely uninitialized at that time.

(This tendency to place the ESP on different disk from the rest of Windows if given a chance is a known issue with Windows 10 installer. The standard recommendation is to temporarily unplug or disable any other disks before running the Windows 10 installer if your system has more than 1 disk.)

When installing Mint, the installer was again booted UEFI-style, but unlike Windows installer it won't touch disks unless explicitly told to, so it created its own ESP partition to a MBR-partitioned disk (sda5, partition type 0xef).

The first Kali apparently also created its own ESP partition on the secondary SSD, but in GPT partitioning, each partition has an unique GUID and UEFI uses it to identify which ESP partition each OS uses to boot, so this did not cause any mix-ups.

When you disconnected the primary SSD and put the secondary one in its place for installing XP, you may have seen a single partition with type 0xee on it. This was a dummy MBR partition table that's part of the GPT partition standard, to indicate to any GPT-unaware operating systems that the disk is in use. But you assumed the disk was unused, and ignored it - so as a result, the Windows bootloader was overwritten without you being aware of it.

Your second installation of Kali must have also been booted UEFI-style, and it created a ESP partition on the MBR - just like Mint did. Kali's "Force UEFI" probably means two things:

As a result, you now had two OSs with different boot methods on the same disk. Kali's UEFI GRUB cannot boot Windows XP because that would require switching the BIOS compatibility back on when jumping from GRUB to the XP bootloader, and GRUB does not know how to do that. Your system appears to prefer booting legacy-style over UEFI, as after fixing the XP's MBR the firmware went straight back into booting BIOS-style... which makes switching into Kali's UEFI GRUB impossible, as the 16-bit BIOS compatibility mode has no hope of meaningfully using UEFI GRUB's 64-bit code.

When you moved the disks back into their original locations, and wiped the secondary disk again, the Windows bootloader was now wiped twice over. The Windows 10 boot recovery got confused as it saw the majority of Windows (configured to boot UEFI-style) on a MBR-partitioned disk and no ESP partition on a GPT-partitioned disk anywhere in sight. The Mint installer may have also gotten confused somehow, but that is probably not the most important thing.

The best way out of this situation and into a sane configuration is probably to use Mint to access the Windows sda2 disk, and copy everything important out of there onto removable media or other safe location:

Then disconnect the secondary SSD, wipe the primary one and start by installing Windows 10 UEFI-style. If possible, you may want to change the BIOS settings to switch the legacy BIOS-style compatibility off for this, to ensure everything goes in UEFI-style. Then install Mint next to it.

Then you can remove the primary SSD, install the secondary one in its place, switch the BIOS-style compatibility back on and install XP. Now move both disks back into their original places, and maybe install Kali in UEFI mode onto the second disk (without selecting "Force UEFI"). Then boot into Mint, make sure the os-prober package is installed, and run sudo update-grub to get Kali onto Mint's boot menu.

Now whether you use Kali's or Mint's GRUB, both should give you three options: Kali, Mint and Windows 10. To get into XP, you'll unfortunately need to go into BIOS settings and explicitly choose to boot legacy-style from the secondary disk.

Convert your disk back to GPT with gdisk:

The output should look similar to this:

If you don't get a warning like above, press w to write the changes to disk, confirm with y. Then run sudo gdisk /dev/sda again, press p to check that your EFI partition is listed with code EF00. If that's not the case, you need to change the type (option t, choose partition number, enter ef00, w to write changes, confirm with y), otherwise quit with q. Then reboot. With a bit of luck your Windows should be bootable again.

If you get a warning, quit with q. You need to resize your Mint partition by the amount of mentioned blocks beforehand to make space for the secondary partition table at the end of the disk. You may use gparted for that. Or delete /dev/sda6 if you're going to do another fresh install. Then repeat.

You can change your boot mode in Bios from UEFI/Legacy Boot -> Both to UEFI only to prevent booting in legacy mode ever again.

You may also want to delete the existing "kali" and "ubuntu" UEFI boot entries with efibootmgr, e.g.

UPDATE: I can now boot into Windows.

Here’s what I did:

I went straight to Method 3. It found Windows under D:\Windows as indicated. So I knew it was still there and valid.

Upon rebooting, THIS time, I entered Grub - but still no Windows to be found in the Grub menu.

Rebooted again, went to the “one time boot menu” and, just for the hell of it, tried Windows Boot Manager (which had failed every other time before). This time, it booted into Windows.

I am still not quite sure what the magic combination was, but I suspect GPT conversion was step 1, Fix BCD errors was step 2, and now the Windows Boot Manager sees it.

Not the answer you're looking for? Browse other questions tagged linux windows grub2 dual-boot uefi or ask your own question.