What is the relation between tty driver and line discipline

In the famous "The TTY demystified", the following figure is shown:

from which it's seemed that the user process is communicating with the "TTY driver", which in turn communicates with the line disciplie. However, in the O'Reilly book: 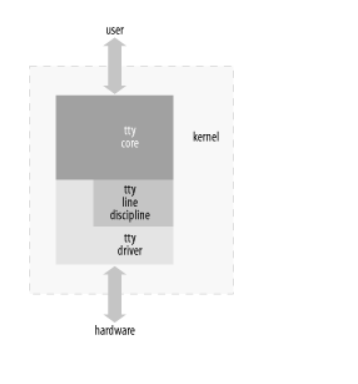 It seems that the user application is communicating with the "tty core", which in turn communicate with the line discipline, and the tty driver is the last layer before hardware. Can someone explain what exactly is a "tty driver"? I want to sharpen my question:

Which type of driver is a tty driver? And where does the line discipline fit in?

Meaning, the O'Reilly's "TTY driver" is a device driver used to interact with the hardware, whereas the "TTY core" is a kernel-software (hence - driver (?)) used to receive the data from the user process, send it to through the line discipline and to the correct driver (let it be a UART driver or a pty master).

What is the relation between tty driver and line discipline

The process communicates with the discipline. But the discipline might be raw (a no-op, null discipline), in which case it does nothing more than pass the messages.

That's why the stack in the O'Reilly book has a passthrough on the left and a line discipline on the right. It's their way of explaining that no-op/raw/null line discipline (raw is the actual name, and you can set it with stty raw).

Not the answer you're looking for? Browse other questions tagged terminal drivers tty pseudoterminal or ask your own question.

5
Difference between the terminal file and the terminal screen
5
What is a device controller, and where does it fit in between the kernel and the device?
2
Is the PTTY inside the Kernel or Userspace?
2
Trying to understand the historical TTY
5
What's the difference between DRM and a graphics driver?
2
PTY master missing read function
0
How are the TTY and serial_core related?