Does a program run by bash runs in a new job?

In this video, it is said that:

In the normal arrangement, if you open a terminal, and inside you have a shell running, that shell represents the start of a new session. That session starts with one job, containing the shell process. When the shell runs a pipeline in the foreground, the processes of that pipeline runs as processes of the existing job.

Whereas in the famous The TTY demystified, it seems that when a shell runs a pipeline in the foreground, it is part of a new job. What's correct? 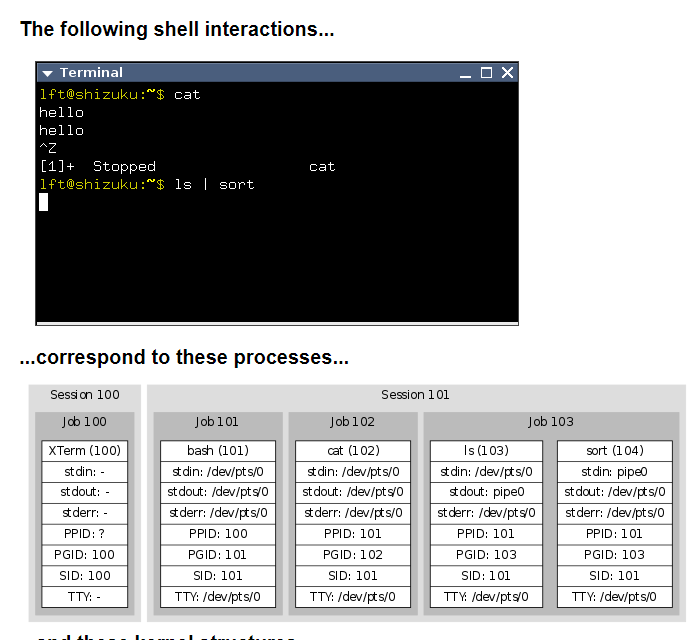 Yes it does. You can spawn it off your shell by typing bg after your ^Z and it will continue to run under it's own PID.

It depends on what you mean by "program".

First, the excerpt from the video is misleading when it says "That session starts with one job, containing the shell process." As explained in What is the difference between a job and a process? and also as implied by the POSIX definition of job, a job is a shell concept. So a running shell is not itself a job unless it is part of a job from a parent shell process. In the excerpt, the parent process is the terminal which, as explained in the The Bash Guide, is just a graphical interface program used to run text-based interface programs which aren't necessarily shells.

Here are some commands to illustrate that the table from The TTY demystified is accurate:

You can see in the last output that two jobs exist: cat and cat | sort, the later being equivalent to the ls | sort from the table.

As to whether "a program run by bash runs in a new job", POSIX defines:

A set of processes, comprising a shell pipeline, and any processes descended from it, that are all in the same process group.

So if you consider that "a set of processes, comprising a shell pipeline" is a running program (which you can on the basis that a program is a set of instruction to be executed), then yes.

But since "program" is a more general concept than just "shell pipelines", then it is not generally true that programs run by bash run in a new job. For example cat and sort are also programs but they don't each run in a separate job.

Not the answer you're looking for? Browse other questions tagged bash process job-control or ask your own question.

59
What is the difference between a job and a process?

2
Force a job to come in foreground when asked for user input
3
Shell's process group ID = foreground job's process group ID?
12
What happens to background jobs after exiting the shell?
4
Is a session leader the only process in its group?
1
Does a shell which does not support job control has the concept of foreground and background processes?
0
Programmaticaly open new terminal with Bash and run commands, keeping job-control
0
Bash function that will wait for a process to be finished before starting a new one