I have accidentally named a folder with an added space at the end on Linux. On Windows 10, this is not even possible, the space at the end is automatically deleted. On Linux Mint 19.2, this is possible, and it caused trouble when trying to access that folder back on Windows.

First try to solve it:

After adding a suffix to the the folder with the space at the end and re-opening the Windows Explorer, I could also see the old files in the folder without a space at the end. I could also save these files somewhere else. Thus, the Linux files are just visually suppressed by the Windows Explorer folder manager, the newly pasted file and its assigned folder dominates everything that was in there before. 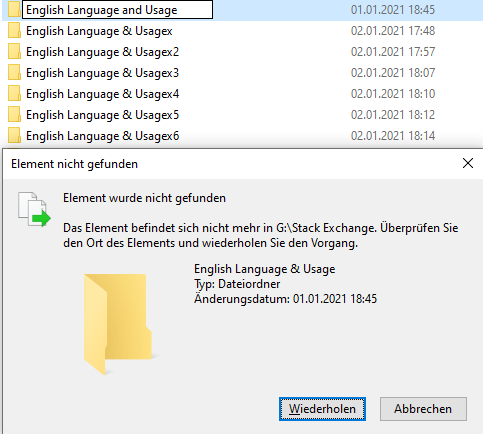 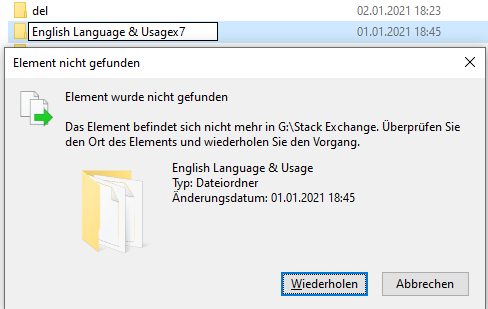 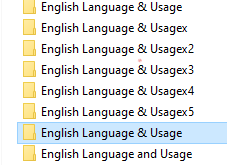 Go back to Linux and remove the space ending, then go back to Windows and any file can be pasted as always.

But this solution is quite awkward.

It is especially if I somehow had even managed to delete the folder with the space ending on Windows (what I did not, but who knows how this might have happened else-wise?), since then, on Windows, I would not even have any chance to delete the corrected folder. I would have to create a new folder WITH a space on Linux in that same folder again only in order to be able to delete the folder WITHOUT a space. And then I would again have to go back to Linux as the solution says.

With or without deleting the folder on Windows, such confusion just because of space endings can happen to any user switching between Linux and Windows.

On Linux, is there a setting that automatically removes the space(s) at the end of foldernames the same way as on Windows 10, meaning at the time of the change itself?

The problem was on an exfat SD-card, though I guess that it happens with NTFS as well. One could also see this not as a Linux, but as a pure Windows file management problem. That is why the Windows question as "the other side" is now on Super User with Windows 10: How to deal with foldernames ending with space(s) that are allowed on Linux but cannot be used any further in Windows Explorer?. Please answer here for the Linux solution, and there for the Windows solution.

I see no evidence of such an option, either in the native driver or the FUSE one. Both drivers are relatively sparse on options.

From what I can tell, these are valid file names on an exFAT file system, and they're definitely valid on Linux. Since exFAT, like UDF, may be validly used on any operating system and Windows need not be involved at all, there's no reason to assume that these should be forbidden. Whether Windows supports them or not is a quality of implementation issue that doesn't exist on Linux (or macOS).

Not the answer you're looking for? Browse other questions tagged linux files linux-mint filesystems windows or ask your own question.

5
How should I prevent data corruption on an NTFS partition shared by Windows and Linux?
1
Installed Linux, now Windows doesn't boot anymore
1
Issues with saving Linux and Windows folders on the same USB?
2
Windows safe characters from Linux
0
Why is a Windows partition mounted while Linux is in use?
0
Recover windows recycle bin files with linux?
1
Increase Linux partition with unused Windows partition space on dualbooot system
1
How do I share my Windows Music Library with my Linux Library?