Do all linux distros have same boot files and all the main files?

I am having a question that do all the linux distros boot files,grub files and kernel files , that are main to run them and only the iso image of the distro is different?

I have Fedora installed on my system and can replace it with manjaro by changing the grub entry? How safe it is?

Various distributions of course have different packages of pretty much everything. Nevertheless, three components are typically rather well isolated from each other: bootloader, kernel, userspace programs.

it should work just fine (source: "been there, done that"). Depending on your particular usecase (kernel features needed by the userspace), you may even be able to run happily a "foreign" kernel without issues.

Less drastic would be to install a new distro in a separate partition, or on a separate disk, and use to original grub to let you choose which one to boot (dual boot). This would allow you to migrate anything you want to keep from your old system.

All Linux distros do not have the same boot, grub and kernel files. The safest way to change distros is by erasing the current OS and installing the new OS over it in the same place on the disk.

In the below screenshot are shown 4 different options for installing Manjaro in the Partitions screen of the Manjaro installer. 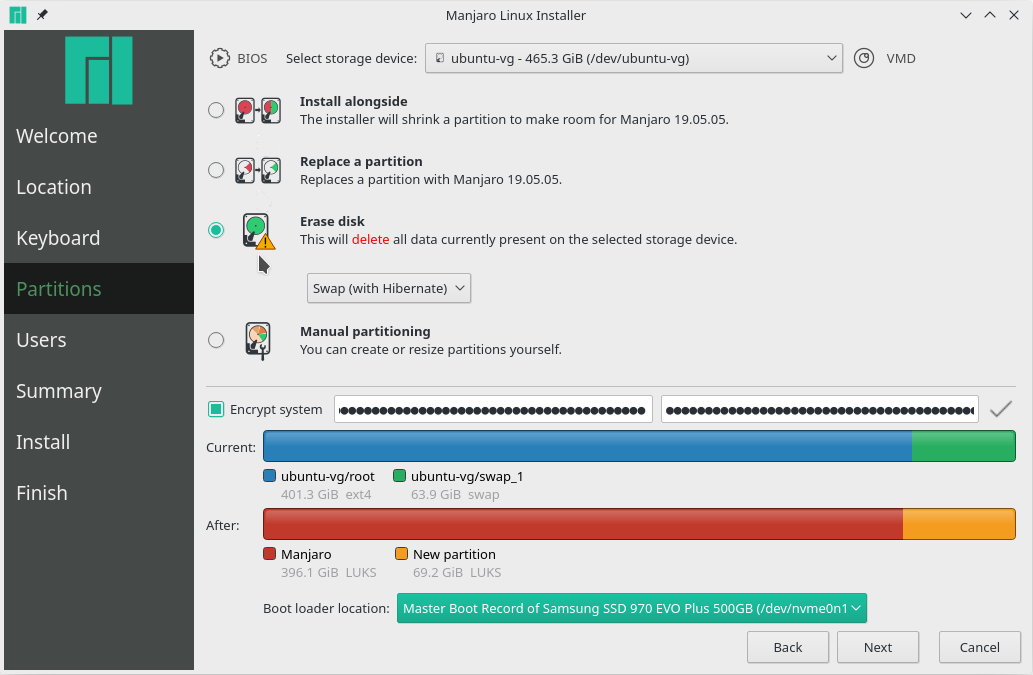 Focussing on the question as asked, and not continuing into the implications.

First, to state two things which should be obvious: computers with different architectures etc. will not be using the same files, and computers from different manufacturers etc. might use the same files if they are only superficially different (different variant of an AMD video card or similar).

For any given architecture there is a dominant boot loader, some parts of which may be in a boot sector while other parts may be in a file. So for x86 there's GRUB (but also LILO etc. as alternatives), SPARC uses SILO (with GRUB as an alternative), ARM occasionally uses Das U-Boot and so on. The boot loader loads the kernel binary, and also optionally the initrd file, in some cases this may be done over a LAN.

There is only one Linux kernel, owned by Linus Torvalds, and built using the source files he releases possibly with distro-specific ("out-of-tree") patches.

The kernel binary obviously varies depending on the architecture, and to some extent what hardware is attached to the CPU. It also varies depending on whether it expects entries in the /dev directory to be predefined, or creates them on-the-fly using e.g. Udev.

A kernel might or might not be built to expect an initrd file, which is basically a compressed filesystem containing programs and configuration files needed immediately after boot. A PC will generally use an initrd file, something like a Kobo reader or a Raspberry Pi will not; I'd note here that this made it fairly easy for the community of Kobo owners to patch in extra functionality since they didn't need the tools to rebuild an initrd.

If an initrd is used, the kernel will eventually be told to use some other device as the root of its filesystem. The content of this device will vary depending on the distro, and this will potentially affect not just what programs and configuration files are present but also how the programs are built (static vs dynamic linkage of core libraries etc.).

When the system configuration is changed or updates, the programs and configuration information in the root filesystem may be used to rebuild an initrd. As a specific example, this happens regularly on Debian-based distreaux, since various configuration files are referred to before the kernel switches from the initrd to the main filesystem.

So the answer to the OP's question is a resounding "maybe".

Not the answer you're looking for? Browse other questions tagged linux arch-linux rhel boot grub2 or ask your own question.

5
How to manually manage grub.cfg for Grub2?
7
How to list all the files used during Linux boot
3
Pressing Ctrl-X or F10 does not boot Linux
7
How to install a Linux system without affecting previous GRUB?
1
How can I dual boot 2 linux distros Keeping One as my primary and constantly change the second?
1
Linux Dual Boot /boot, /home and /dev partition sharing
0
Can't install any linux distro and dual boot with Windows 10
0
Grub Not Showing All Linux Distros