Trying to load the preset offered here, after saving as json and importing the preset, I cannot enable it.

It is absent in the list of presets under any category. And I don't see a separate custom category. 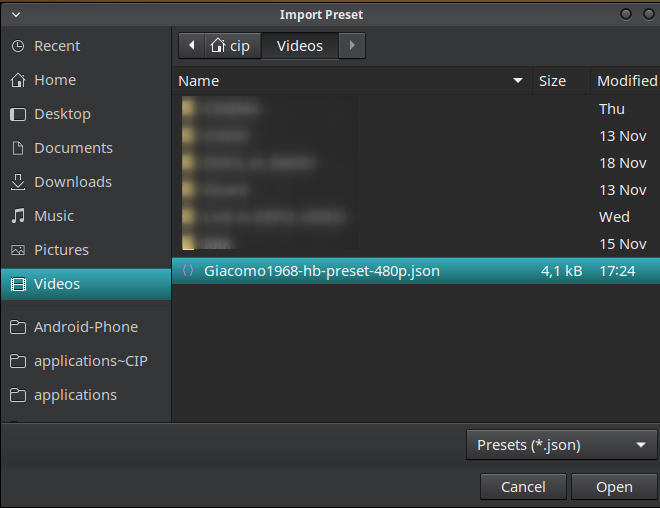 Looking up the official website, I see a more recent version there (1.3). Adding the PPA and installing handbrake-gtk I get 1.2.1 version (because my system in ubuntu-18.04-based, newer versions of Ubuntu should get even newer versions): this has a different interface, one with a button that was absent in the other version.

Also, the preset is automatically loaded after bring imported.

Testing again with handbrake old 1.1 (which removes the newer version) it gives upon startup a warning that presets newer than the present version of Handbrake are present.

Not the answer you're looking for? Browse other questions tagged linux-mint handbrake or ask your own question.

4
Dual graphics cards in Mint & Ubuntu
2
Handbrake on Debian not aware of x265 despite installed
8
Handbrake new VP9 codec is grayed out
0
How to get Broadcom drivers working in Linux Mint 19.3 without network access?