QEMU/KVM: How to configure a writeable shared folder for guest, which itself is a CIFS mounted network share on host?

I am having a hard time configuring a shared folder with write permissions inside the guest. My special case is that the shared folder references a CIFS network share mounted on the host.

Network share (and shared folder) /media/nas/temp is mounted via 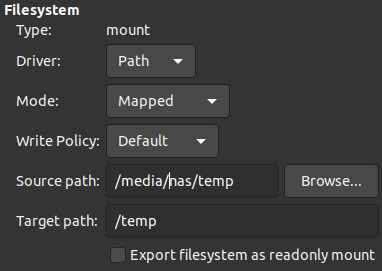 /temp (/media/nas/temp on host) is mounted via:

Permissions from guest perspective (64055 is the uid of libvirt-qemu group of the host):

I also tried file_mode and dir_mode mount options from the host:

Curiously, now I get a different error:

Why does it make a difference, if I want to share a network or local folder via mount -t 9p? As shown, the permissions should be the same and it shouldn't matter for the guest, what kind of mountpoint is shared (?).

Has anybody managed to do write a shared folder mounted as network share from host (if yes, how)?

Similar posts, which are about sharing a local folder:

After a bit more investigation, here is what worked for me. Important points:

Ad 2.: It wasn't sufficient to set libvirt-qemu as group, resulting in "Permission denied" errors. In the question, I did it the other way round. Make sure to select the correct UID for the guest - e.g. set the same UIDs for dave on the host and guest. Note: the QEMU/KVM virtual machine is run as user libvirt-qemu.

Ad 3.: These options make the mountpoint writeable for user dave, whose group is set as owning group (standard would be readonly).

Not the answer you're looking for? Browse other questions tagged ubuntu networking kvm qemu libvirt or ask your own question.

21
How can I store files in the mounted shared folder?
3
How to use QEMU/KVM virtual machine disk image on SMB/CIFS network share: Permission denied

21
How can I store files in the mounted shared folder?
2
How to share a folder in libvirt+qemu/kvm with Linux guest and Linux host?
5
Write access denied when mounting folder from qemu guest
1
Cannot start domain after adding Filesystem shared dir Fedora 27
2
How to mount a linux host filesystem with FreeDOS running in qemu?
3
How to use QEMU/KVM virtual machine disk image on SMB/CIFS network share: Permission denied