I installed Ubuntu 20.04 LTS on my laptop which was originally running Windows 10. I wanted to replace windows completely, not dual boot, so used the erase disk option. (Though while installing I think it said I had no os installed? Possibly because I had to switch from RST to AHCI)

It wasn’t giving me the option to boot to Ubuntu so I used Boot Repair to try and fix it but now it just boots to the grub command line. I tried reinstalling Ubuntu to fix it. I can’t find the grub folder to carry out the fix given in the above question.

In my /efi/ folder I have Microsoft/ Boot/ ubuntu/

I don’t understand why all my windows stuff is still there. Any help would be appreciated, I’m a complete novice with this.

I’m using an ASUS Vivobook. I didn’t take note of the Boot Repair output the first time but I tried it again and here’s the output: http://paste.ubuntu.com/p/gCHNhNBVGk/

Edit: Seen this is the paste above

For example you can boot into Windows, then type the following command in an admin command prompt: bcdedit /set {bootmgr} path \EFI\ubuntu\shimx64.efi

Tried to change back to RST, boot windows and do this but get

Changed back to AHCI and it booted to windows automatic repair, so went to command line and entered command. Got

The boot configuration data store could not be opened. The requested system device cannot be found.

Edit2: After following below, the system just boots to the BIOS Utility, even after manually partitioning and installing to the harddisk. Looking at GParted, I get some errors 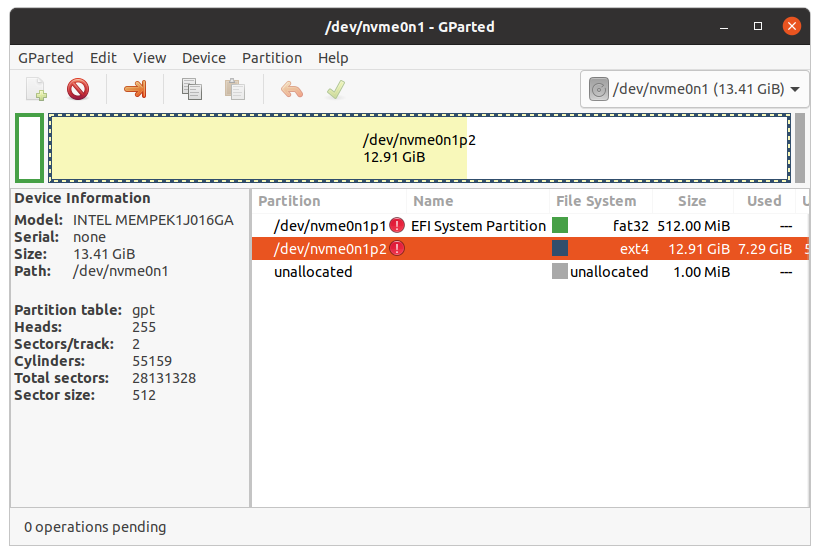 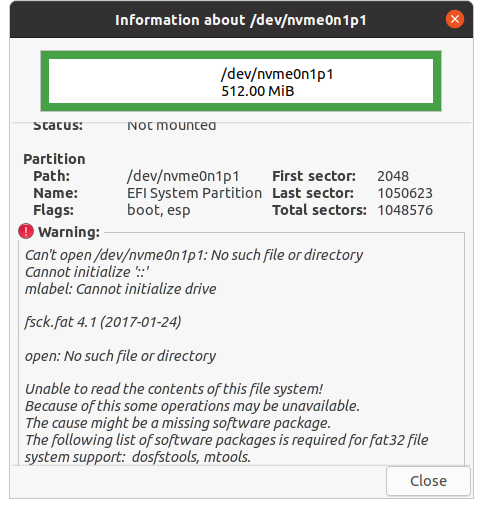 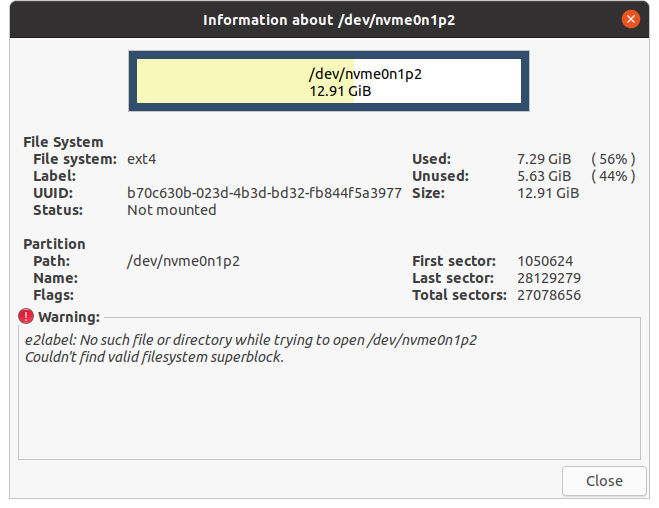 I ran Boot Repair again (http://paste.ubuntu.com/p/3KpVBRfsSG) and it now loads into the grub command line again and Ubuntu is back as a boot option in the BIOS Utility.

Edit3: Finally fixed! Ran the following in the grub command

Fingers crossed it continues to work after shutdown. Still a bit worried about the GParted errors though.

Edit 4: GParted errors don’t show up when on installation (instead of try Ubuntu). I have to enter the above commands each time I turn on my laptop. I tried running the following but still had to enter the commands

Running update-grub outputs (among other things)

Found Ubuntu 20.04.1 LTS on /dev/nvme0n1p2 Is it still trying to boot from nvme instead of sda then?

According to the boot-repair output, you seem to have a harddisk or SSD (sda) with a windows-setup and an NVMe (nvme0n1) with your ubuntu-setup, correct? You choose the NVMe to delete completely and install ubuntu, but your windows is still installed on sda, probably in some defect bootloader state. Thats why you still have windows installed, even when you chose to delete everything when installing ubuntu – because you deleted only the NVMe. You seem to have two EFI-Partitions, one on the NVMe and one on sda, both of them have an ubuntu.efi, probably one from the installation and one from the repair.

Having two EFI-Partitions is not exactly a problem, but you need to know what you want if you have that.

can you explain, how your configuration was when you ran windows and how you want it now? Is it possible, that your sda is a spinning harddrive and RST was using the NVMe as a caching-device?

EDIT: made a few pictures on how to delete all partitions, install ubuntu on your nvme and create a partition on the slow harddisk for big data. For some reason, my cursor is always a little bit too much north.

try ubuntu instead of install 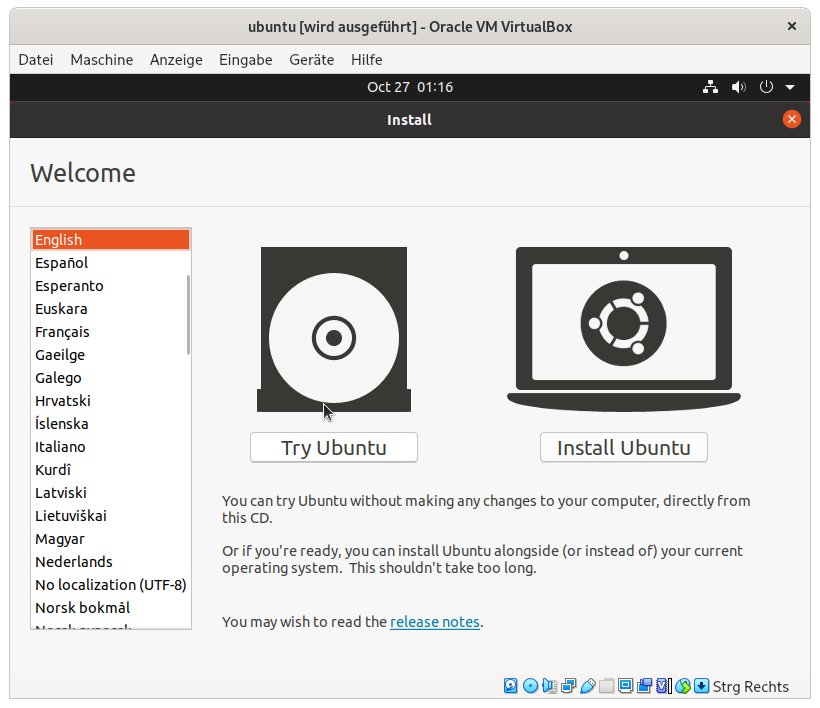 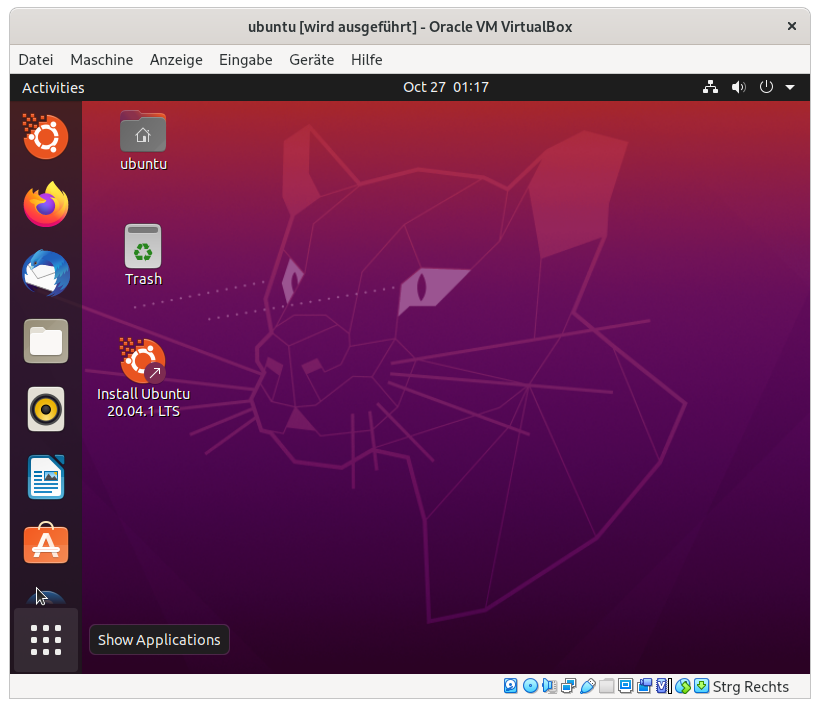 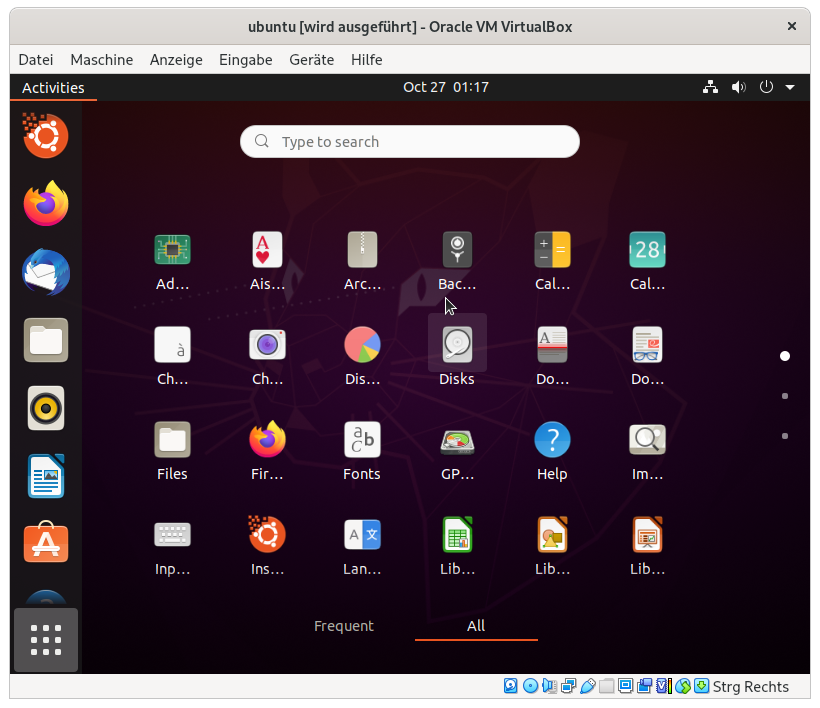 select your nvme, open the menu and select format disk … 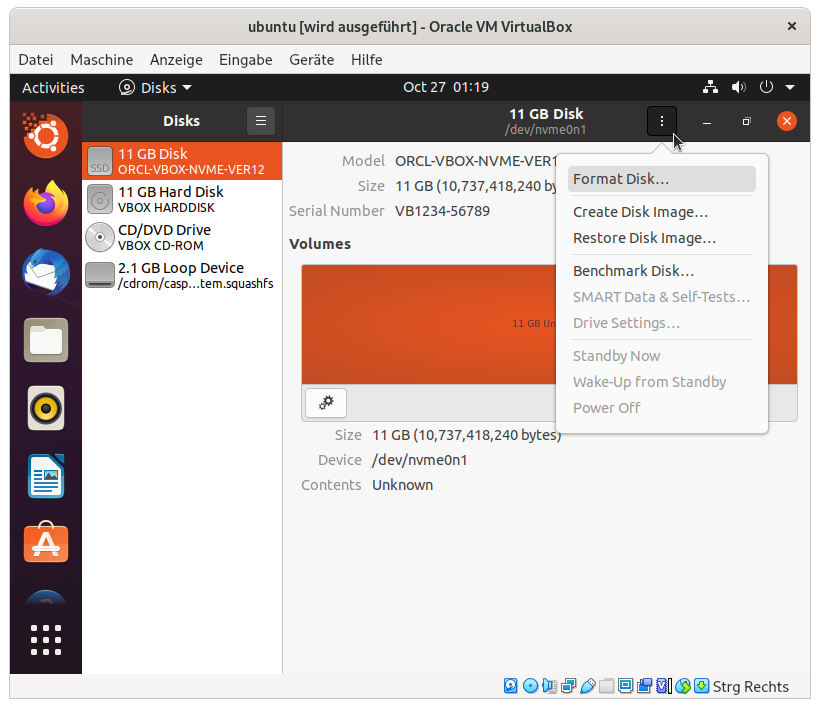 quick and gpt is ok 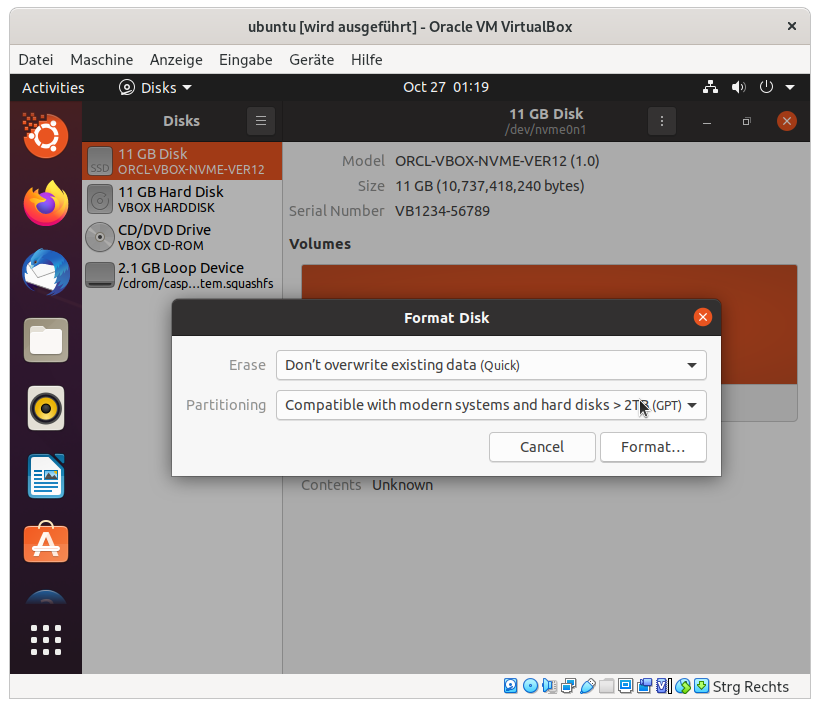 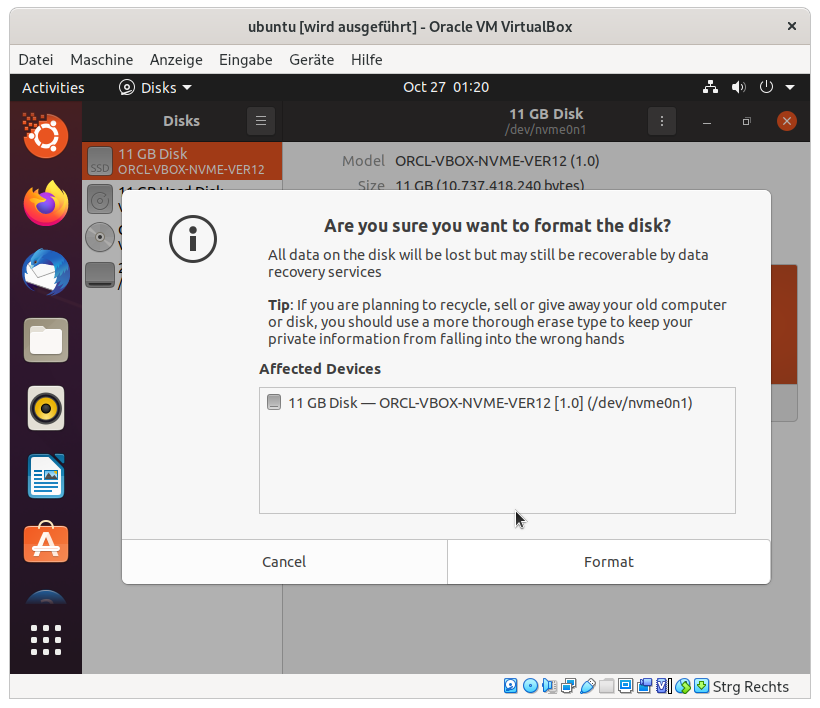 and do the same on the other disk 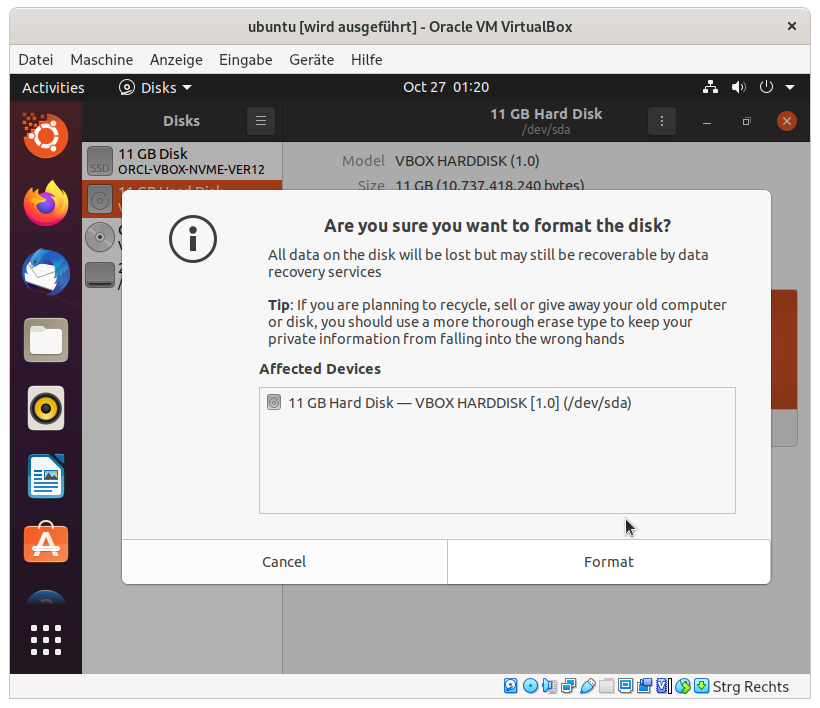 close the utility and start the installer 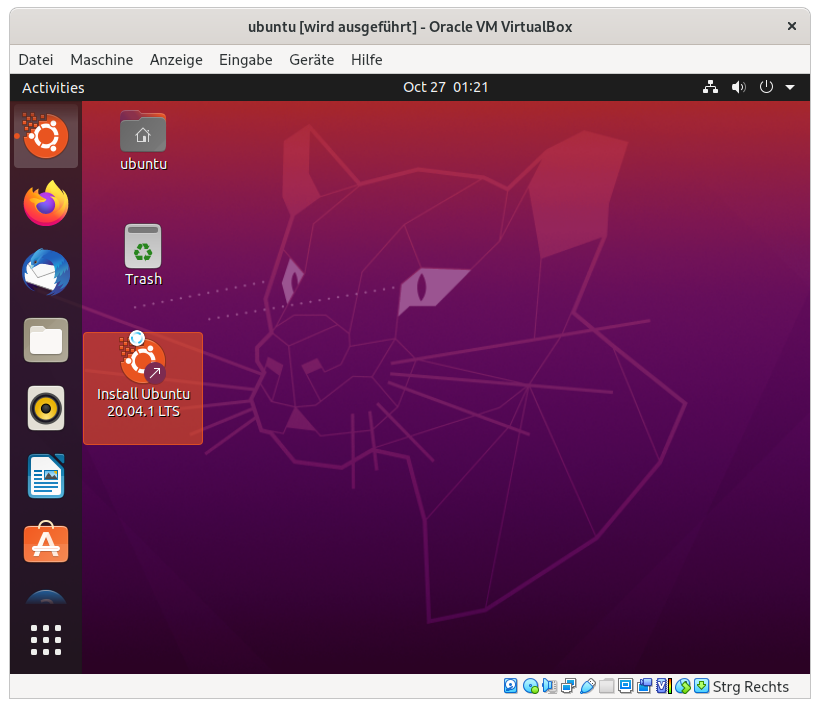 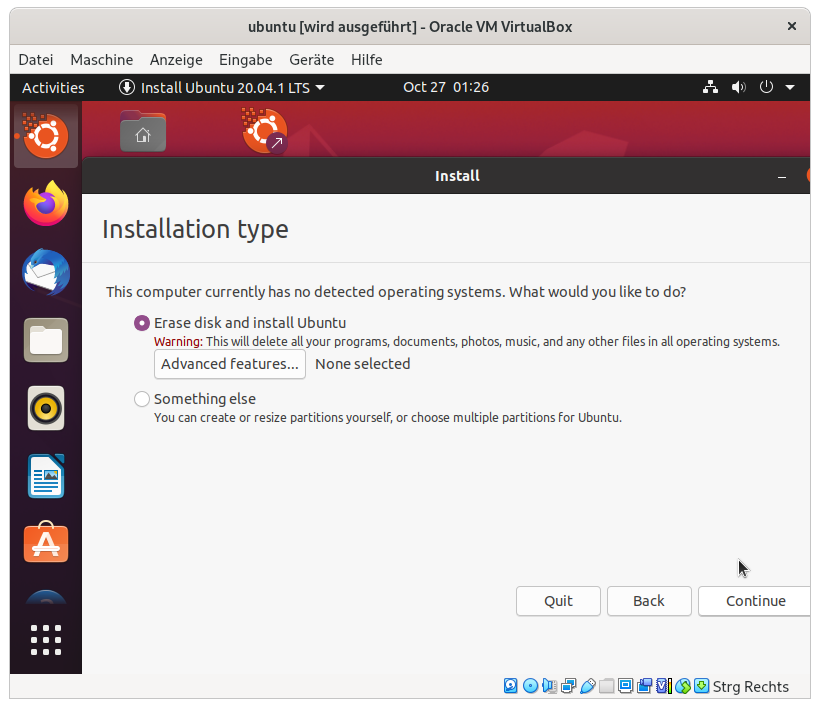 select the nvme as installation-target 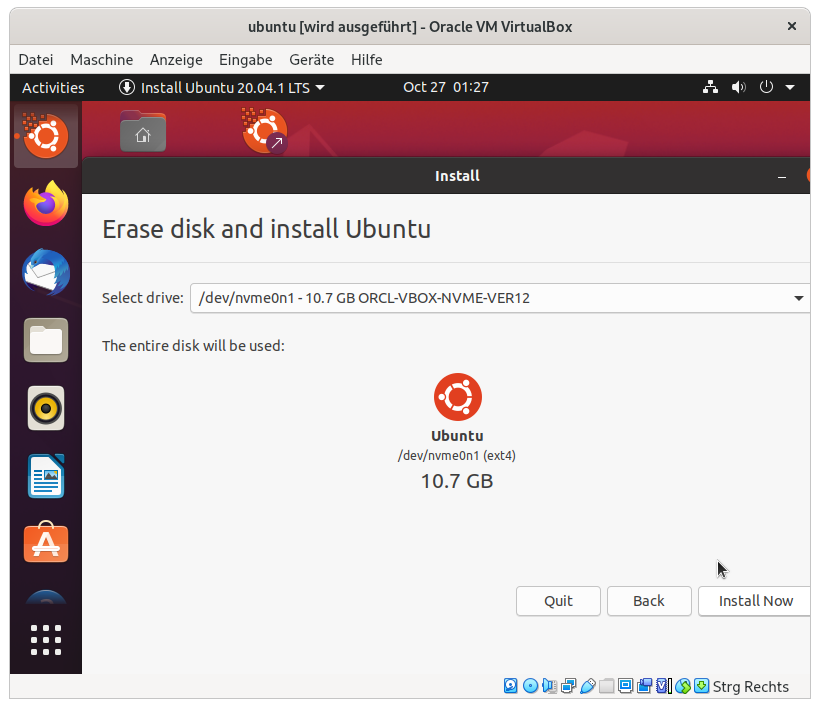 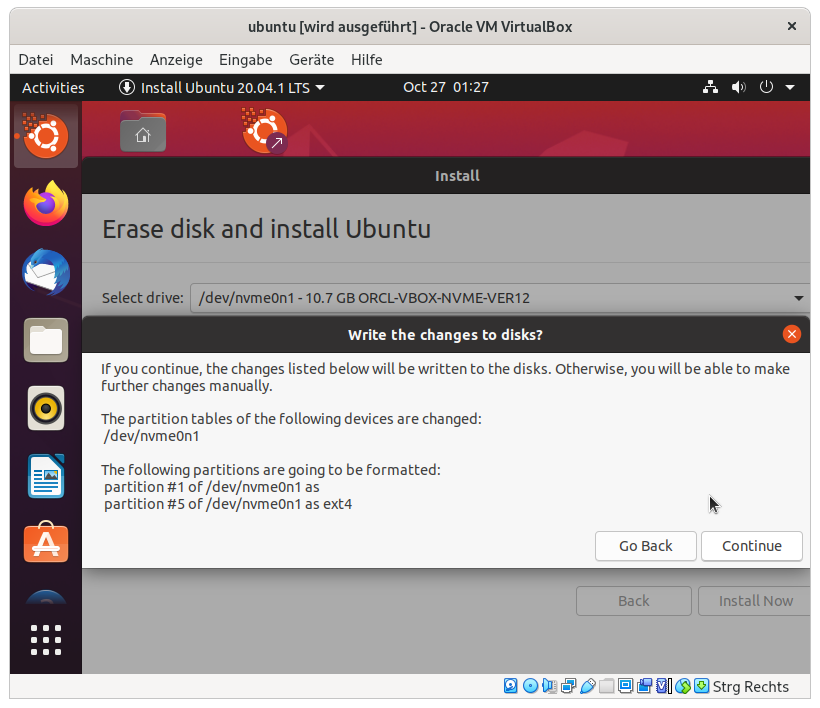 restart after the installation 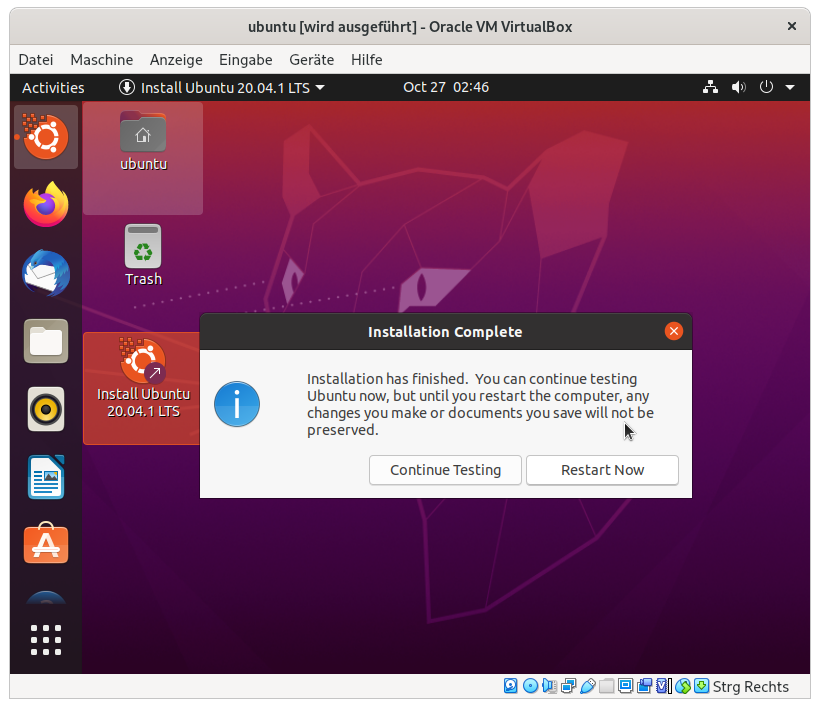 open the disks-utility from within the installation, this should look like this 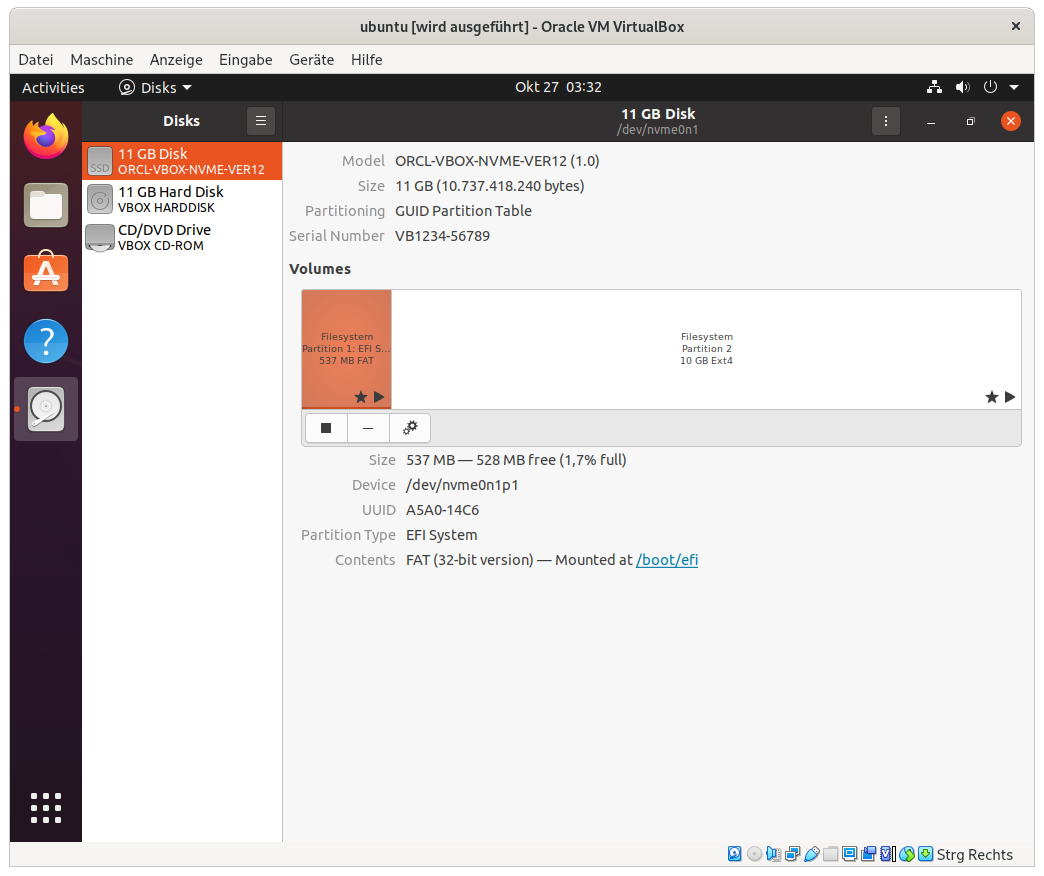 select the harddisk and create partition in unallocated space [+] 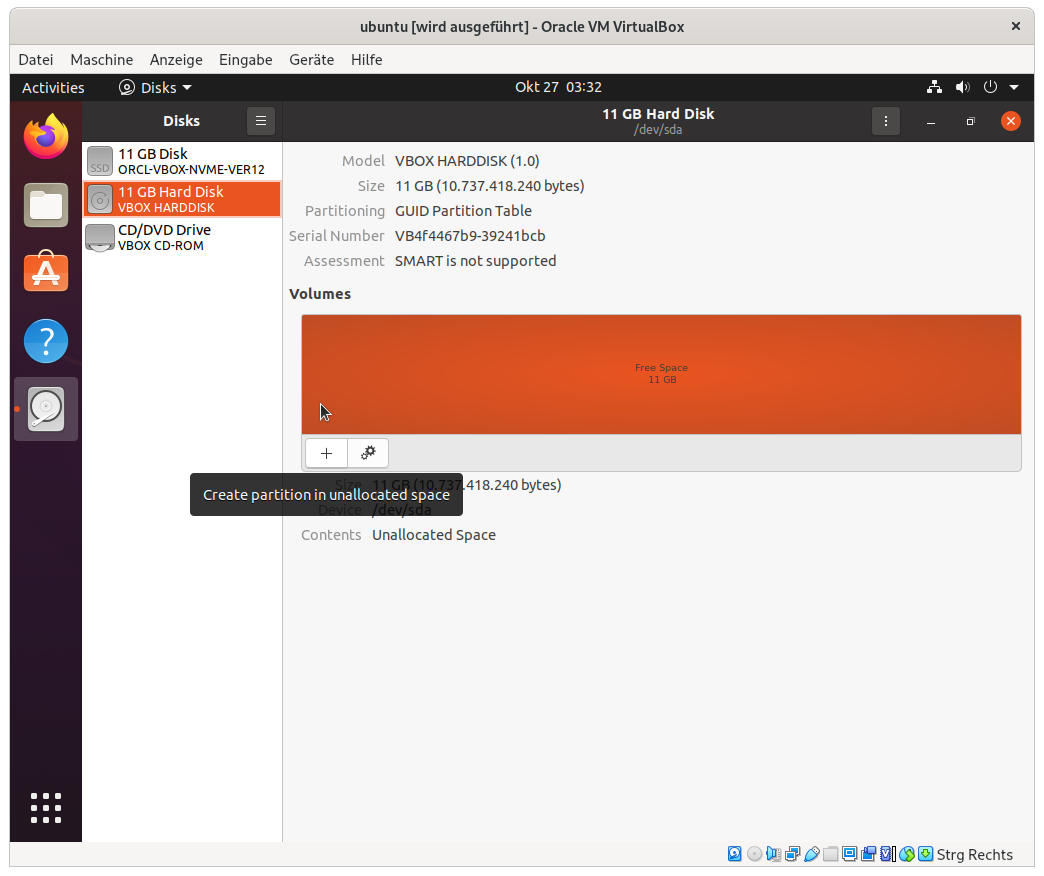 take the full size (1TB for you) 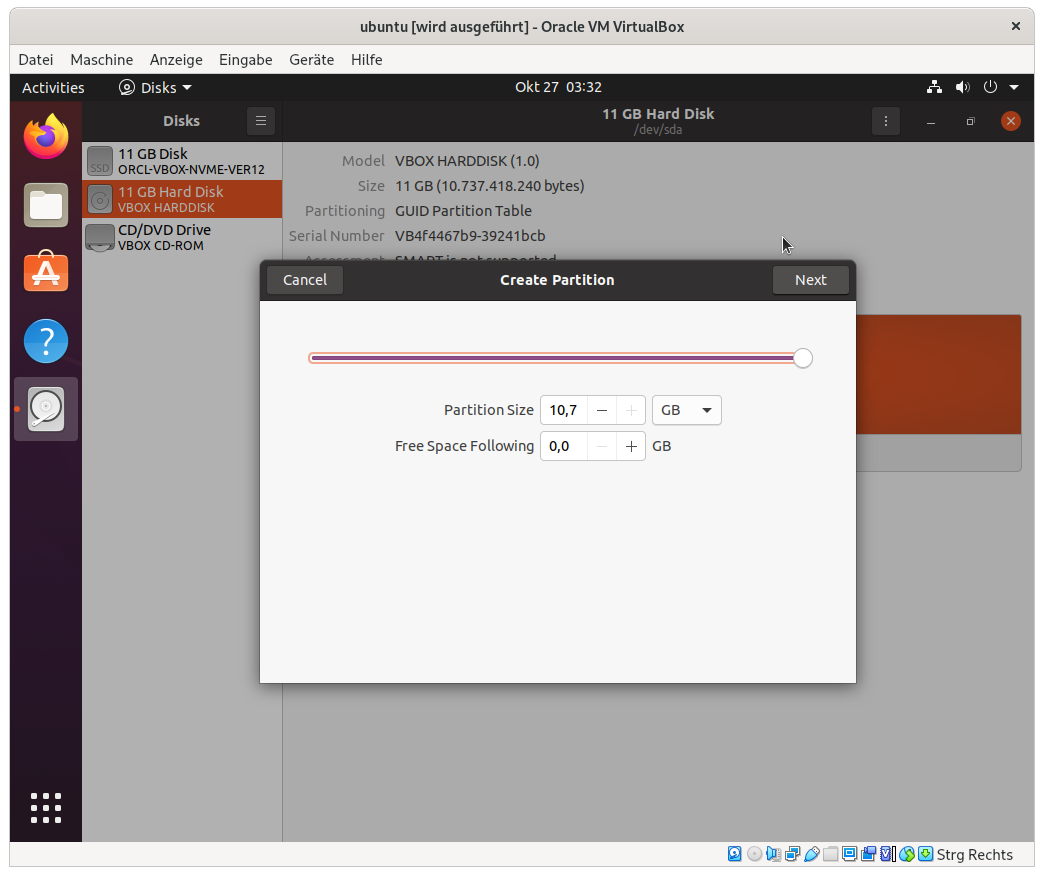 give it a name and format as ext4 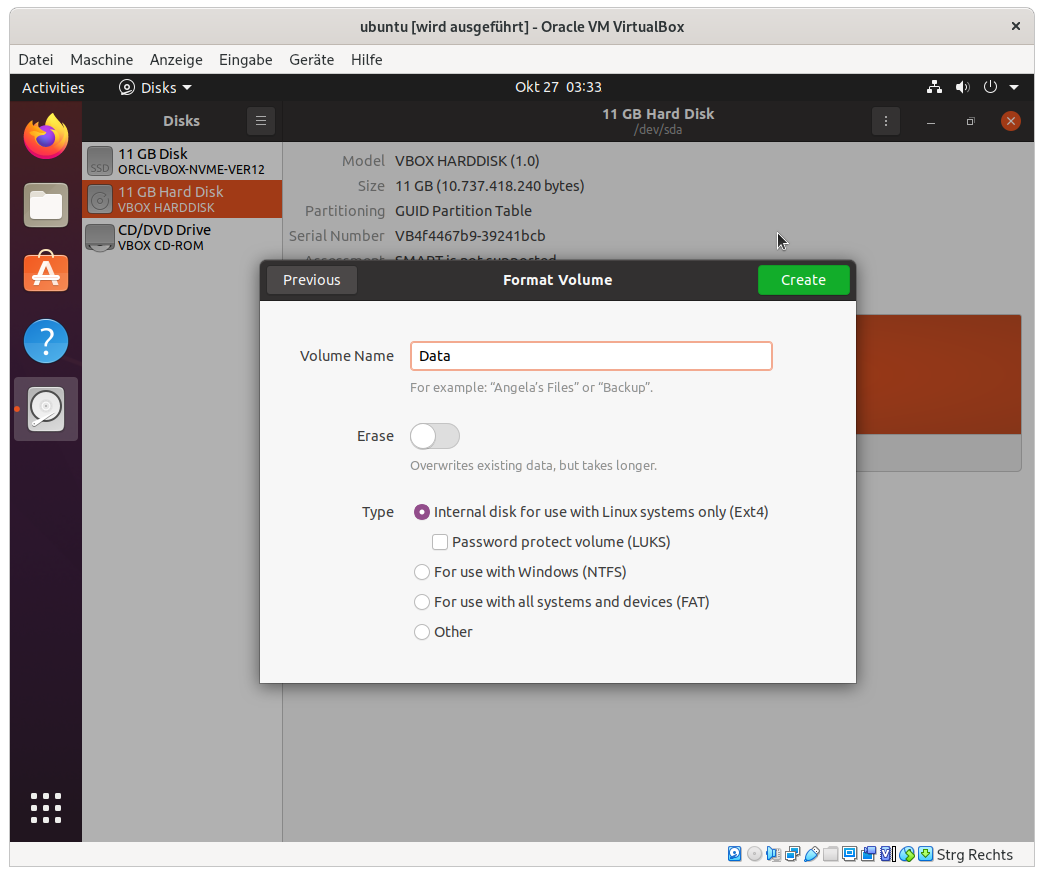 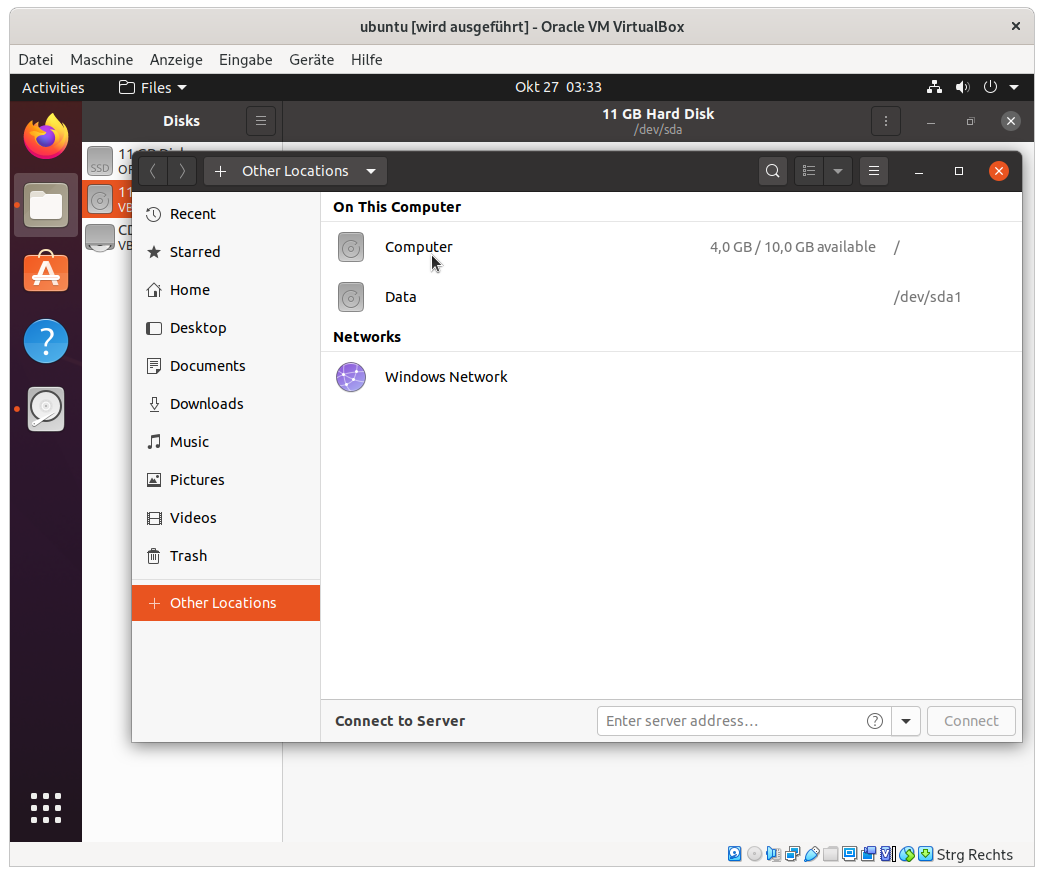 now you can save data there 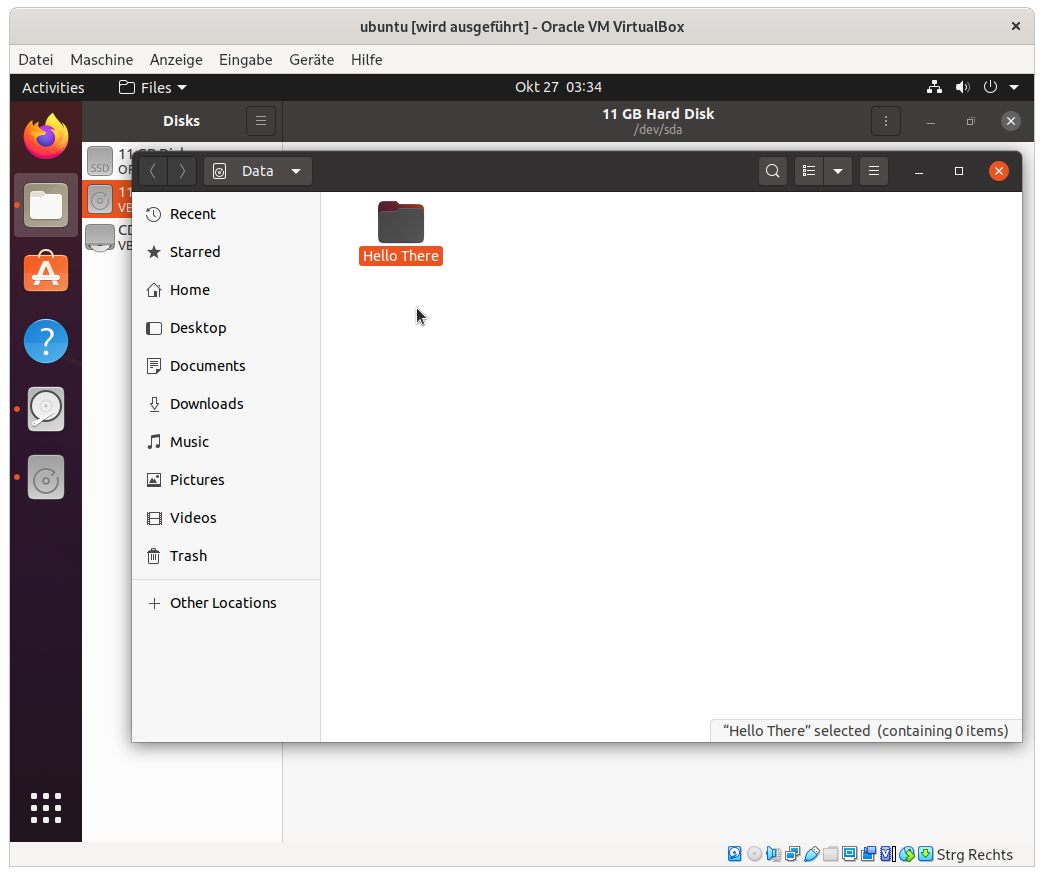 If you want to have it automatically mounted on boot so it appears on the left panel by default, you can set the options in the disks utility by changing the mount options 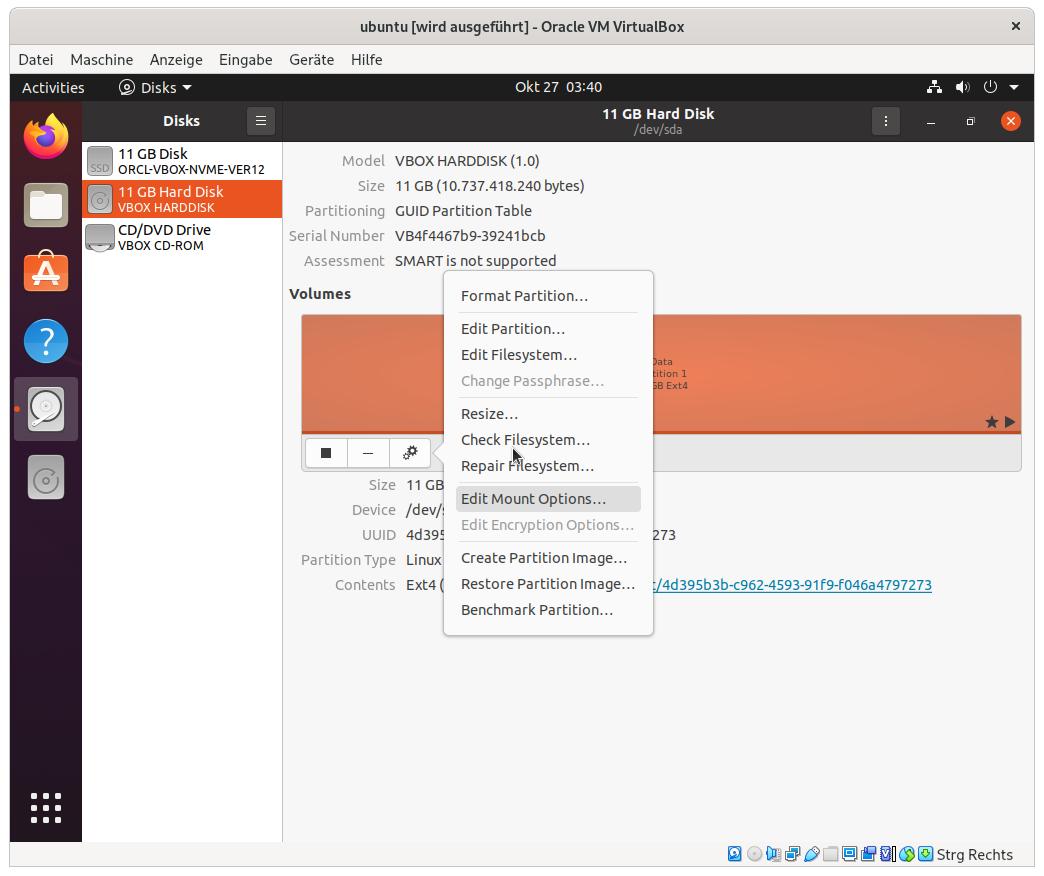 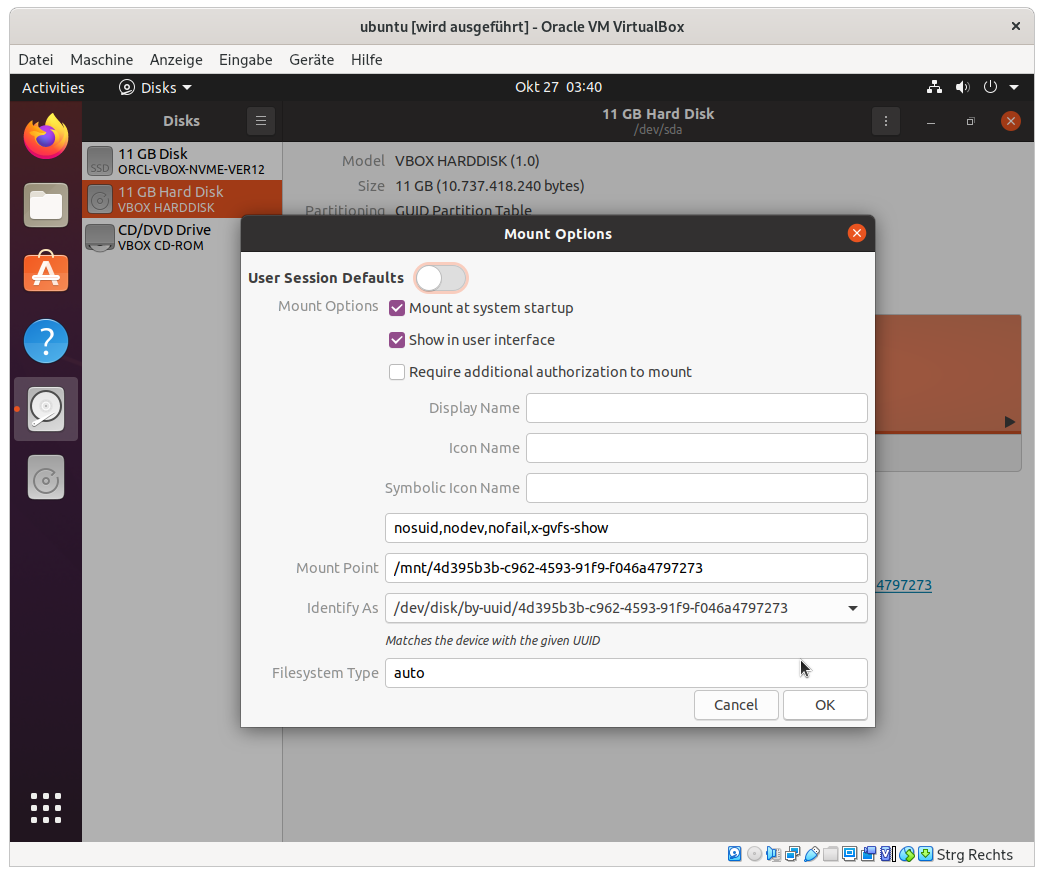 Please note: Files saved under the data-partition are much slower than the files under your home-folder but you have 1TB space. I don't know, how big your NVMe is, the support-site didn't mention it but I fear not that much. Use it for movies and music and stuff like that. And as a bonus: you can (and should) use it as a backup-drive. If your NVMe dies, you can have them still on your harddisk ;).

Not the answer you're looking for? Browse other questions tagged ubuntu boot windows grub2 or ask your own question.