how does a process group have process id?

I'm reading a textbook which discusses process group and shell and it says:

Unix shells use the abstraction of a job to represent the processes that are created as a result of evaluating a single command line. At any point in time, there is at most one foreground job and zero or more background jobs. For example, typing linux> ls | sort creates a foreground job consisting of two processes connected by a Unix pipe: one running the ls program, the other running the sort program. The shell creates a separate process group for each job.

and below is a picture: 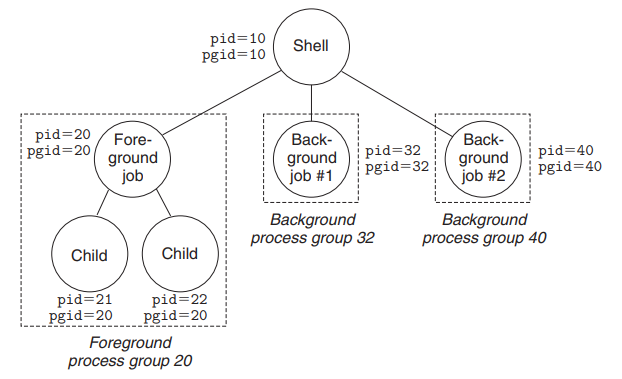 In the picture, the process group concept is represented by the dahsed squares, not the circles. The circles all represent processes, and the “jobs” are the first process in each group.

See How is a process group ID set? for details.

Not the answer you're looking for? Browse other questions tagged linux shell process or ask your own question.

10
What should interactive shells do in orphaned process groups?
1
How to terminate a background process in Linux when the pid is unknown?
4
Parent restarted by child doesn't respond to CTRL-C
40
How to ensure exclusive CPU availability for a running process?
5
Why is process not part of expected process group?
3
How does bash's job control handle stopped or terminated background jobs?
1
Can't add a child process in the foreground process group
8
Does a process’s parent have any significance from the perspective of its child?