Is there any authoritative place that says multi processes or threads accepting a listening socket is an atomic operation?

When I was reading some materials about Nginx, I noticed that one of the 2 traditional ways to accept incoming connections on a single socket is :

The second of the traditional approaches used by multithreaded servers operating on a single port is to have all of the threads (or processes) perform an accept() call on a single listening socket in a simple event loop of the form:

Quoted from The SO_REUSEPORT socket option .

Then I noticed that Nginx seems to use that approach too.

As depicted in the figure, when the SO_REUSEPORT option is not enabled, a single listening socket notifies workers about incoming connections, and each worker tries to take a connection. 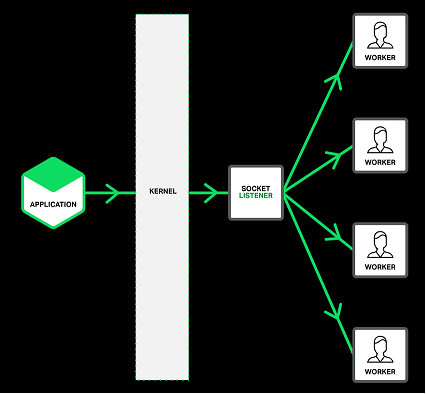 Aagin, in The Architecture of Open Source Applications (Volume 2): nginx, searching the page with keyword accept, there it writes:

As previously mentioned, nginx doesn't spawn a process or thread for every connection. Instead, worker processes accept new requests from a shared "listen" socket and execute a highly efficient run-loop inside each worker to process thousands of connections per worker. There's no specialized arbitration or distribution of connections to the workers in nginx; this work is done by the OS kernel mechanisms.

So I was really shocked because nobody had told me that accepting a listening socket among various processes or threads is OK and won't cause race condition.

Because when referring to use shared resources, the first thing that would come into my mind is "Is that function call thread safe"? So I Googled it and found an related question on StackOverflow.

The accpeted answer proved the behaviour again but it didn't give an reference at all and people under the comments were still arguing about from where the offical documentations define that.

By that time, I was thinking that the property given by thread-safe is not enough, because it's saying multiple threads or processes accept on a single listening socket. I need something more stronger than that.

So I came to check the book The Linux Programming Interface, in §5.1 Atomicity and Race Conditions, it writes:

Atomicity is a concept that we’ll encounter repeatedly when discussing the operation of system calls. Various system call operations are executed atomically. By this, we mean that the kernel guarantees that all of the steps in the operation are completed without being interrupted by another process or thread.

Atomicity is essential to the successful completion of some operations. In particular, it allows us to avoid race conditions (sometimes known as race hazards). A race condition is a situation where the result produced by two processes (or threads) operating on shared resources depends in an unexpected way on the relative order in which the processes gain access to the CPU(s).

So my question is:

Is there any authoritative place that says multi processes or threads accepting a listening socket is an atomic operation?

I just couldn't find any references on the Net after hours of searching.

As a point here, note that accept is a system call. It would not make any sense for a system call to not be thread-safe, because that would mean that the kernel is not thread-safe!

Not the answer you're looking for? Browse other questions tagged socket or ask your own question.

2
Custom application running on embedded device - do I need to register my listening port in /etc/services?
29
How does the server find out what client port to send to?
0
Which thread receives SIGURG?
2
Why does socat fail at proxying X11 where ssh succeeds?