It is possible to convert a raw image to a VMDK image with qemu-img like this:

I know it is possible to set UUID of the generated VMDK image with:

Is there a way to set the UUID of the disk as it is being converted with qemu-img (would be great if the solution worked on FreeBSD)?

This answer is from the top of my head and is not tested. If you test it feel free to update the answer.

Unfortunately the question have very little context to explain why we are doing this. At face value we could just refer to qemu-img and give the answer: No.

But that would be boring. Let us instead make some wild assumptions and run with it.

What you describe as a solution is possible on FreeBSD with qemu-img from emulators/qemu-utils and vboxmanage from emulators/virtualbox-ose. Maybe this is what you are doing? But you do not state why this is a problem (Maybe just want to use one less tool?).

The interesting thing is then what is only implied: You are using a GUID Partition table (GPT) on your disk. qemu-img does not really care what is on the disk whereas vboxmanage is nice enough to have a helper function.

So if you have the full original copy of /dev/ada0 as ada0.dd (or just a raw file born in Qemu) - then you can use the image as a virtual memory disk:

This will give us /dev/md0 which should be your full disk.

You can then check everything looks good.

When working with GPT you might prefer using gpart

The UUID is created automatically with this command. I do not know if it actually touches the entries in the partition table. In that case make a backup first. Maybe destroy the full table - create and then restore? You will need to do some testing here. But the point is that you now have full access to the drive.

You can mount the filesystem using this method as well

When we examine the GUID Partition Table Schematics from Wikipedia we are told that we find the Disk GUID in mixed endian in the partition table header at offset 56. 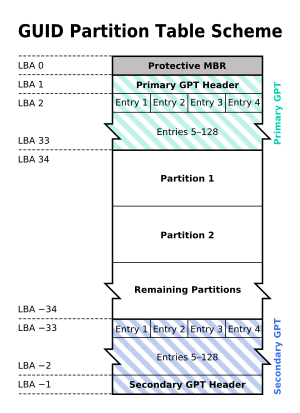 So rather than mounting the disk image we can simply treat them as a bunch of bytes. I assume that you are using 512 byte sectors but you may need to adjust for 4K sectors. The header is then at LBA 1 and we are interested in offset 56 - thus 512 + 56 = 568

We can then simply change the needed bytes. Hexdump is not quite enough for this and you should have a look at xxd which comes with editors/vim. uuidgen can help you generate a proper GUID.

If you go down this route then please observe:

That would be a fun little script to write.

I have a sneaky suspicion that what you really want is to keep the original raw image pristine and do things on the fly. We are partly there as xxd supports both stdin and stdout so we could pipe trough it. Unfortunately it does not look like qemu-img supports stdin.

Then we have to have a file on disk. The pragmatic solution would be to have the original file as backup and a new copy used for modifications. This will only have the cost of added diskspace.

But as you are on FreeBSD you have a screaming fast way to save the diskspace and avoid doing a copy. You can use ZFS to your advantage. Simply create a new dataset where you place your raw image files and do a snapshot. Then you can modify the file directly but it will only affect the bytes changed (or rather the changed sectors). When done you quickly revert those sectors by rolling back the snapshot.

We place whatever data we need into /rawfiles and create a snapshot for our clean state.

We can then modify a few bytes in our potentially large image files. When we want to get back to our clean state the we roll back.

If you have space contraints then this is a fast and viable option. If you do something like this then beware of race conditions if you keep rolling back.

If you do it as a backup "just in case" then you can skip creating a seperate dataset and just do zfs snapshot zroot@hailmary. If things blow up then just cp /.zfs/snapshot/hailmary/......

If you have influence on the image creation process we have some fun options as well.

We can use qemu-img to create a new image, mount it and create the GPT (with a new GUID)

But as it is just a file we do not need qemu-img.

Why am I showing this? Well, maybe you are doing something along those lines. Then we have a pretty neat trick when on FreeBSD: mkimg(1).

With this you can create disk images on FreeBSD and it supports QCOW, QCOW2, Dynamic VHD, Fixed VHD, VMDK and RAW. This mean that you can go directly to VMDK.

The example is FreeBSD centric but it is using raw partitions. So if you change your source from the raw full disk image to just partition images you should have a viable route.

Not the answer you're looking for? Browse other questions tagged virtualbox freebsd qemu conversion disk-image or ask your own question.

1
Adding a populated existing disk device to a QEMU raw image
3
How to convert Windows 7 partitions to qcow2?
0
QEMU/KVM: USB3 passthrough to FreeBSD
1
How to clone a single partition from a HD to a qcow2 disk image for use in qemu-kvm?
0
"qemu-img": overwriting a running OS?
0
How to convert a list of VMDK files into a qcow2 or img file which have the same size
1
How to merge common parts of qemu qcow2 disks