Running sensors I get gpu temp of 72C and fan 0 rpm… bad?

Not sure if I should be concerned. The temp is not considered high. But it is much higher than anything else. Also if I play a video the GPU temp is 85C.

And the fan shows 0 rpm. Never noticed that before. Not sure if that is a problem? Putting my hand in there I could feel the air from the fan on the GPU on a card. Not sure if they are referring to a GPU on the motherboard? 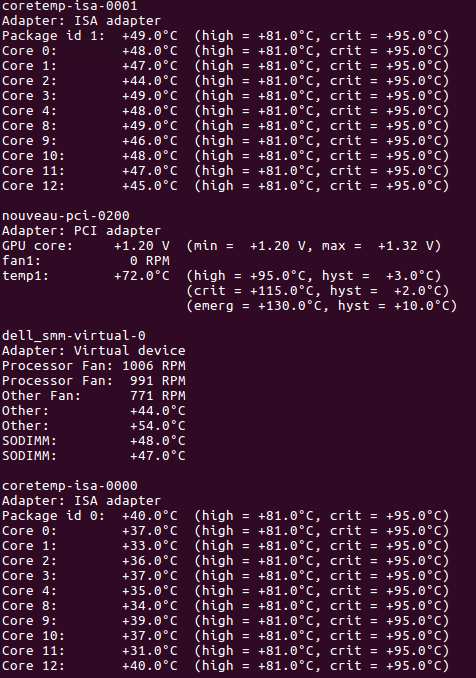 You said you've checked that the fan on the GPU actually works, so the "0 RPM" is either a sensor fault or the driver doesn't actually know how to read the fan speed from this particular GPU model. Or perhaps the GPU manufacturer has chosen to use a 2-wire fan in this model, so there'll be no easy way to monitor the fan speed.

Yes, some GPUs tend to run rather hot. But as far as I know, the "high", "crit" and "emerg" set-points are determined automatically by the nouveau driver using the information stored in the GPU firmware, so apparently your card is fine up to 95 degrees Celsius. You still have a margin of about ten degrees even when playing videos, so it's OK.

The temperature and fan speed readings in question are produced by the nouveaudriver which handles only NVidia GPUs, so unless you also have a NVidia GPU on the motherboard, it must be the GPU on the card.

And you have coretemp with a large number of cores displayed, which indicates a modern Intel or AMD processor, each of which would normally have an iGPU of the same manufacturer, so having a NVidia GPU on the motherboard is unlikely.

Not the answer you're looking for? Browse other questions tagged linux sensors or ask your own question.