How to scroll the screen using the middle click?

On Windows, most programs with large, scrollable text containers (e.g. all browsers, most word processors and IDEs) let you press the middle mouse button and then move the mouse to scroll. This scrolling is smooth and allows you to scroll very quickly using just the mouse.

When I've used Linux on laptops, two-finger scrolling performs roughly the same function; it's easy to scroll down a page quickly (much more quickly than one can by scrolling a mouse wheel) but the scrolling remains smooth enough to allow precise positioning.

Just to make this concrete, let's say - if it's relevant - that I'm asking in the context of Firefox, Google Chrome, Gedit and Eclipse on a recent version of either Mint (what I use at home) or Ubuntu (what I use at work). I suspect this is a fairly distro-agnostic and application-agnostic question, though.

As far as I can tell, my options for scrolling are:

None of these satisfy me! This UI issue is the single thing that poisons my enjoyment of Linux on desktops and almost makes me wish I was using a laptop touchpad instead of a mouse. It irritates me enough that I've concluded that either I'm missing some basic Linux UI feature that solves this problem, or I'm just an oversensitive freak and it doesn't even bother anyone else - but I'm not sure which.

So my questions are:

The feature you are talking about is called "Auto-Scrolling". It lets you press and hold the middle mouse button and move your mouse to scroll smoothly. In Linux, the default behavior for this action (pressing middle mouse button) is generally pasting text.

However, there is a preference setting in Firefox and an extension available for Chrome/Chromium which would let you use the middle mouse button for scrolling and activate this feature.

In older versions of Firefox: "Edit" → "Preferences" → "Advanced" → "General" → "Browsing" → "User autoscrolling".  Click on the below for a larger image. 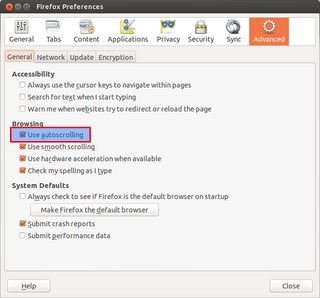 For Chrome/Chromium we can use an Extension called "AutoScroll" (from kaescripts.blogspot.com).

As far as other applications are concerned, I haven't yet found a solution for them. Anyways, it's the tall webpages that create most of the problems for which both Firefox and Chrome/Chromium have a solution.

This will work with all your applications without the need of installing anything.

Get your input deviceID. In my case was 11.

If you want, list available properties with xinput list-props <deviceID>. If you are using libinput (the future/present), almost all properties will start with libinput. For evdev check my answer here.

TRY THIS : For auto scroll functionality in firefox 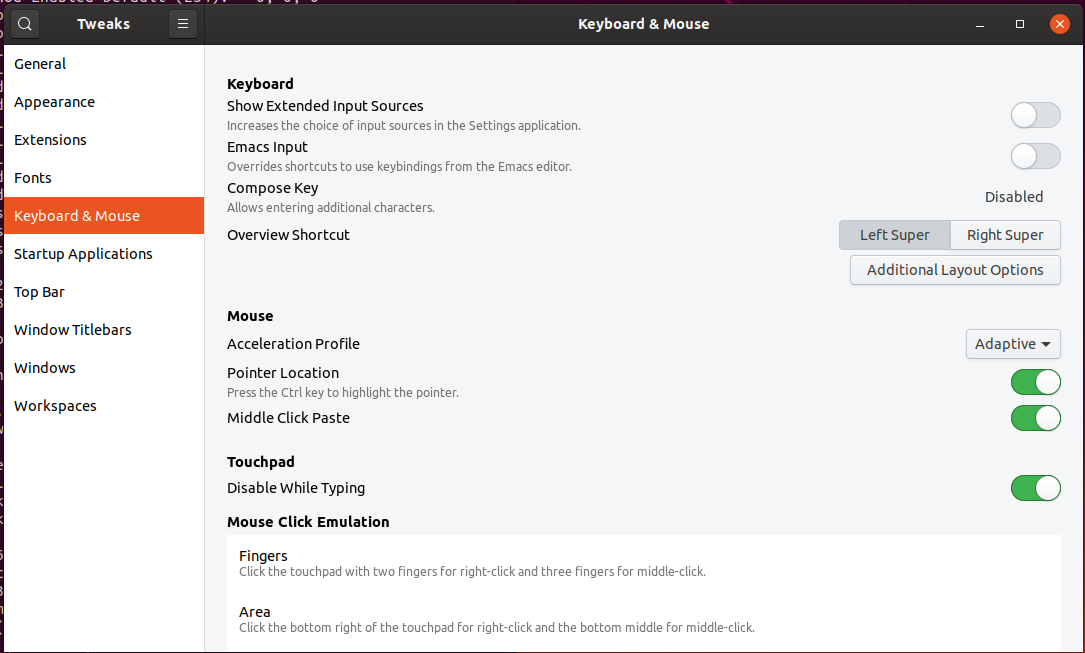 Expanding on Brandon Duffany's answer - his script didn't work on my system (Ubuntu 20.04.3 LTS) and after some debugging, I found it was likely because of the for loop. It behaved as if pointer_ids array was full of empty values and the script just kept returning unable to find device. I figured it was some bash trickery with badly recognized array values so I rewrote the loop.

And gave executable privileges to both the bash script and the desktop shortcut.

And then manually run the script cause I'm too lazy to reboot :-)

PS: I think you can still use the Brandon's script which creates the desktop shortcuts for you if you replace just the for loop (watch out for the array name).

Decided to automate Pablo A's answer, since I found it to be the best one (as it works in all apps, not just Firefox).

Save this file as a script (for example: ~/setup_middle_click_scrolling.sh), make it executable with chmod +x, then run it (you can delete it after you run). It enables middle-click to scroll and also adds a startup script so that you get the functionality whenever you log in.

Hopefully folks in the comments could point out whether this would work on all systems, but it works with my setup of XFCE + libinput + standard 3-button mouse.

Not the answer you're looking for? Browse other questions tagged mouse scrolling or ask your own question.

44
Make mouse movements scroll when the middle button is held down
27
Which driver is handling my touchpad?
0
Middle Click Scrolling on Wayland & Gnome
0
Scroll using mouse button
0
How to scroll by holding "middle-mouse" and moving pen on a tablet?
0
Linux Scroll Extension

44
Make mouse movements scroll when the middle button is held down
6
How do I configure a Trackpoint, so middle-click scrolling is not misinterpreted as a middle-click paste?
10
How to increase horizontal mouse scroll sensitivity?
6
IMWheel creates jittery scroll when using touch-pad
2
Sidescrolling using Shift+Scroll like in Windows