A high-votes answer here for the question "What's the lightest desktop" which actually tried to quantitatively assess memory use relies on a Wikipedia page which quotes 2011 data.

The newest article I could find dates back to November 2018 (thanks to https://LinuxLinks.com). Are there newer comparisons which objectively measure memory use? 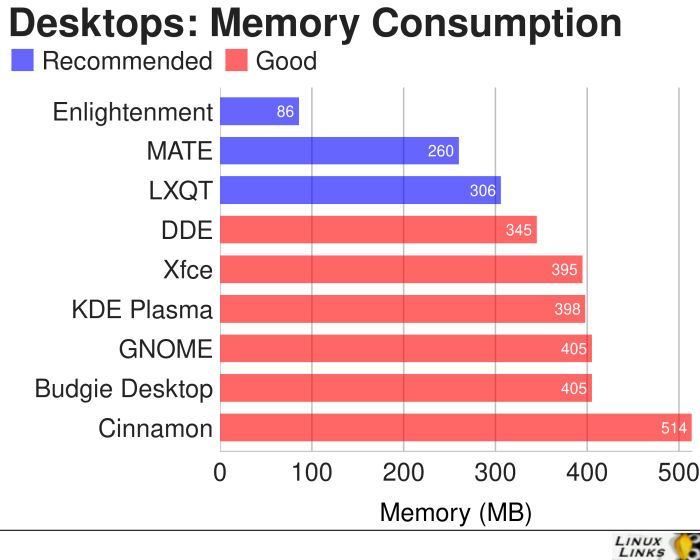 I think to measure such consumption isn't going to be easy. You can measure it simply by installing it into VM and default configuration. However, when your configuration changes so does the memory consumption. You would have to do some long-term statistics for your workflow. In my eyes it will also differ based on the distribution you are using - gentoo, archlinux will probably have different results than Ubuntu, Opensuse, RH.

There is also a strategy in Linux to use all available memory. I presume you want to use the gui on system where there is not enough memory available. For that you would need to perform your own tests. You would have to see how the environment deals with low levels of memory (if it can free the used memory, can be effective on low memory systems, et.)

If you want some newer statistics for different env. you can check this Ubuntu flavors one. It does not cover your list but most of it Comparison Of Memory Usages Of Ubuntu 19.04 And Flavors In 2019 (July) 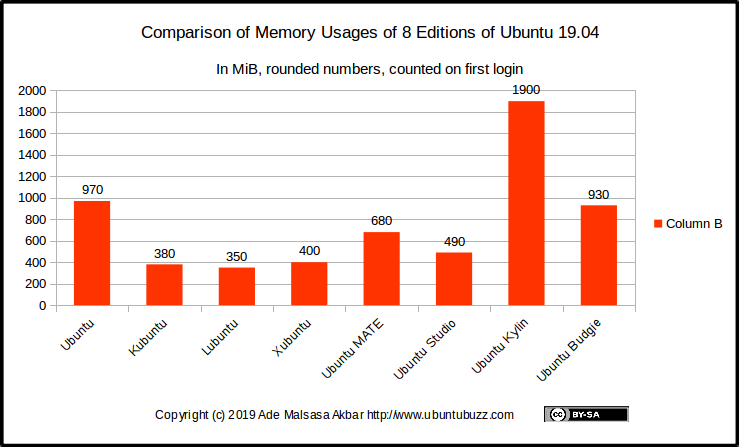 There's a Fedora Magazine blog post about doing this on Fedora 31 in December of 2019.

The results are summarized in the below table:

Depending on what you mean by "desktop environment" you might include simple window managers that use less.

You might want to look at wikipedia's list of light-weight Linux distribution, specifically the window/desktop manager column.

Unless you establish benchmarks then you are unlikely to get comparable data. Just about everything is either marketing "fluff" or else unbenchmarked, and that includes Wikipedia.

In the first instance there is nothing online that suggests your original quoted figures are likely to have change by the ~30% which would sway any decision purely based on RAM. Of everything I have seen the only thing that has any weight [sic] is a nice little comparison done by this guy. Installed a bunch of different distros and got similar results to your post. Bunch of middleweights couple of heavyweights and a couple of lightweights. Same names as yours.

In the second I wouldn't think your "seasoned citizens" (be careful, am getting there myself) would be so grateful for a lightweight DE that has a long learning curve, especially if it is tooooo long. Know what I mean?

Someone else's personal look at it here. Same story.

So, there a lot to say here:

First of all, it's true that there isn't that much graph/comparison of memory usage/or which DE(or Desktop Environment) are the smallest in term of footprint(as the other demonstrated).

That doesn't mean that there can't be one right? the only way to truly know (since most of those comparison or review aren't always updated, contrary to the codebase of the aforementioned subject) is to try it yourself.

It sounds easier and faster than other may think, given on how most of the distro have the tendency to let users run into a live session, which is either kept in a ram drive or ram directly.

I wouldn't recommend doing this, neither to distros (though you don't need to change distro to try different DE) or the DE themselves. As most will tell you, "distro hopping" is bad practice (though most users, me included still ended up doing it anyway)

What's important is, what you want in a DE? if it's only low memory usage, while keeping all of it's core usability, then why not use a windows manager or WM for short? While the name isn't describing it's real potential, WM can and do (for most) support most of what a DE does.(without using as much ram)

Not the answer you're looking for? Browse other questions tagged memory desktop-environment benchmark lightweight or ask your own question.