Yesterday I was setting up a new Kali guest VM in VirtualBox and had some issues during the installation. At the step of installing software packages the installation would fail, so after a few retries I decided to skip that step. The rest of the installation finnished without any issues.

After the installtion finnished I started trying to figure out which packages were missing. The first hitch I ran into was gettin apt to work. apt update and install would always fail so I cleand out /var/lib/apt and tried switching repo mirrors, but nothing helped. The specific error I get when running apt update is: 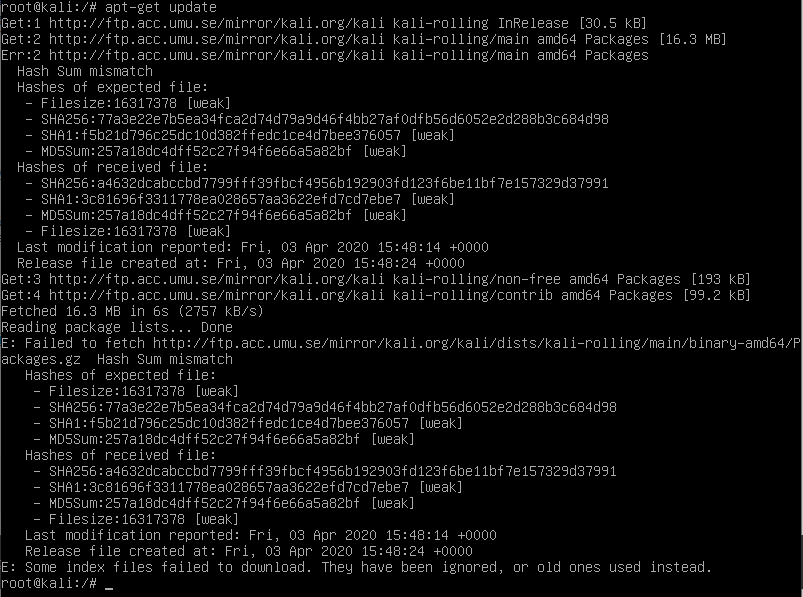 Then I noticed that the SHA checksums don't match but the MD5Sum actually does match. So my working hypothisis is that nothing is wrong with the downloads or repos, my system is producing wrong checksums and that's why apt always fails.

At this point I should probably nuke the VM and re-install the system, but I'd rather use this as a learning experience and fix the problem. So I'm hoping for sugestions on what to do next.

Edit in response to @Gilles 'SO- stop being evil' great answer.

I tried to verify if the Packages.gz file is out of sync with the metadata in InRelease.

So as far as I can tell, the Packages.gz file is downloaded correctly and the actuall hashes do match what is expected from the InRelease file. But apt still reports wrong hashes.

So, after mucking about a lot I did finally get apt to a working state by manually downgrading apt to version 1.8.4 (original version was 2.0.2). The issue is reproducible, running apt upgrade installs 2.0.2 and the problem returns.

This answer assumes a Windows 10 host.

I've encountered what appears to be the same "Hash Sum mismatch" error on "Packages.gz" during the "Installing the base system" step of any of the 2020-2 amd-64 ISOs on VirtualBox. I also booted the Kali 2020-2 amd-64 VirtualBox OVA, and received the same error while attempting an apt-get update. It appears to have been resolved for me by disabling the "Windows Defender Credential Guard" feature, otherwise known as "Device Guard" or "Virtualization Based Security".

There are several methods of disabling this feature, as explained in the link. I used the "Windows Defender Credential Guard hardware readiness tool", available here.

The Kali package archive is currently in an inconsistent state. You can't do anything about it.

It would be very unlikely that your system would produce wrong checksums. There are several reasons it could happen, but none of them are plausible.

It's somewhat less unlikely that your network is under attack, and an attacker is actively manipulating the files that you're downloading. It's still unlikely because the attacker would know that the attack would be detected and ineffective due to the cryptographic checks that apt makes (I'll explain these checks below). The attack would only be useful against a user who arranges to ignore the error or who manually downloads .deb files and installs them with dpkg.

Unlikely doesn't mean impossible, of course. You can verify that none of this is happening by downloading the files and calculating their checksum on a different, known good system. I did that and got the same values of expected and actual checksums.

The corruption could be in one mirror, so I used a different mirror (https://http.kali.org/dists/kali-rolling/). The InRelease file contains the expected checksums, and Packages.gz is the file whose checksums are verified.

I also downloaded the files from the same mirror as you and there the files had their expected checksums, so the problem is repaired on that mirror. It looks like a temporary error and the fix hasn't been fully propagated yet.

I don't know what caused the problem. It could be an attack attempt (but if so it seems to have failed since not all the files that needed to be corrupted were corrupted). More likely, it was a synchronization failure somewhere inside the Kali infrastructure.

I don't know why you're seeing a matching MD5. Either the InRelease file that you downloaded has inconsistent data or apt is not even bothering to calculate MD5 because it's considered weak.

As promised, here's how apt ensures the security of downloads. The following cryptographic infrastructure generates the data that guarantees that the packages are genuine:

This is sufficient because:

That's it. Note that it doesn't matter how the files were transferred between the Kali infrastructure and the download mirror, or between the download mirror and your system. Using TLS for those is a security improvement because it prevents a network attacker from serving stale files (for example, from pretending that a security update to a critical piece of software never happened, by serving genuine but obsolete packages with the corresponding obsolete version of the Release file and its signature).

The only way something can go undetected is inside the Kali infrastructure: if the signing key is compromised, or if the build servers report the wrong hashes.

Disabling Hyper-V worked for me.

Per this comment, I found the resources I needed to do just that.

After doing this, I no longer see the "green turtle" on the guest's status bar.

To turn it back on, do the process save as above with this alternate step 3:

I noticed that Docker For Windows uses Hyper-V, so it's possible that shutting down Docker would fix the VBox issues if you are using Docker.

Not the answer you're looking for? Browse other questions tagged apt kali-linux virtualbox or ask your own question.