How Can I Add A Dual-Boot Installation of PrimeOS to my GRUB?

Recently, I installed PrimeOS (Standard version) onto my computer in its own ext4 partition. During the installation it asked if I would like to install GRUB2, obviously unaware that my computer already had it. This attempt to install Prime is only just after a nasty encounter with Android-x86, where a new GRUB was installed without the option to boot my preexisting operating systems (an affair that ended with my completely wiping everything and starting afresh, since even BootRepair didn't fix it).

Because of this I chose to skip that step, and of course, this means that I cannot boot Prime as it doesn't show up in my GRUB menu (or the BIOS boot menu, for that matter).

I've tried using BootRepair, but on looking at the advanced setting it appears that it doesn't recognize it as an OS to be booted at all. I read this article, which helped me to get at least a basic understanding of GRUB. I began following this guide, which seemed promising, but the steps seemed strange to me, since he was using the ISO for the live USB installer, and one comment says that it doesn't save any data, just like a live USB would.

It did help me find out about GRUB Customizer, though, and this is what I've been looking at. In-so-far I've just used the default boot sequence: 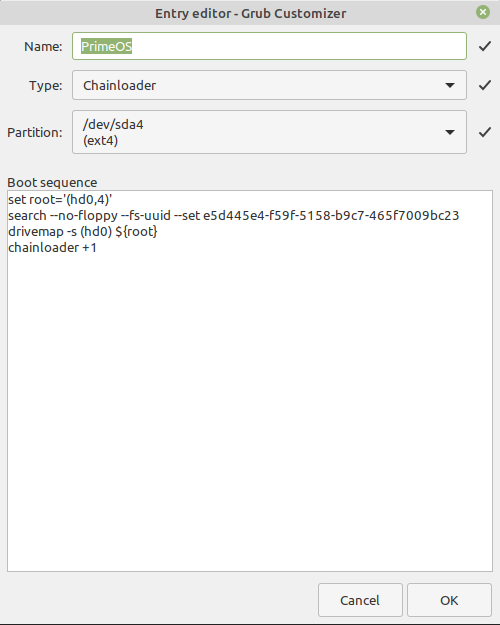 Which gives an error, unsurprisingly. Anyway, any guidance on this is appreciated. The computer in question is a 5-year-old HP Pavilion Notebook, with Linux Mint Debian Edition 4 installed already, and working fine. Cheers!

Well it seems I've solved it! No answers have been put here, and I can't blame you all for it: The more I've looked at it, the more evident it's become that this is a tricky problem: PrimeOS is relatively niche, and its GRUB loader settings only more so.

Anyway, to anyone interested, I took the plunge. I reformatted the partition it was installed on (wiping all data), then used the Live USB installer again, this time allowing it to install GRUB. When I rebooted, a GRUB menu appeared, with two options: PrimeOS and "Debian at h2", my LMDE OS. The PrimeOS option works fine. The peculiar thing is that the Debian option actually runs the original GRUB, and from there allows me to boot Mint.

This is strange, as I would have assumed only one GRUB could exist at once; my best guess is that PrimeOS's installed GRUB uses the second (original) one as a chain-loader. Peculiar, but hey, it works now!

This holds in two words: grub-customizer and chainloading.

Be aware that installing another "grubbed" Linux may cause issues to the first one. Sometimes the Grub that overwritted the old one will only detect the kernels of the "old" Linux, but if you do update the latter's kernels, how would the new grub knows that it go newer entries (kernels) ?

Well, sometimes it can't. That's why using grub-customizer to remove the "old" Linux entries from the new Grub, then chainloading your "old" grub (that you must have installed on / on your "old" Linux's, not on your MBR/GPT) is needed.

Well I have Windows 10 running in my PC and I am interested in dual booting PrimeOS without any issue. can you please advise me how may I go for it?

Not the answer you're looking for? Browse other questions tagged linux dual-boot grub boot-loader android or ask your own question.