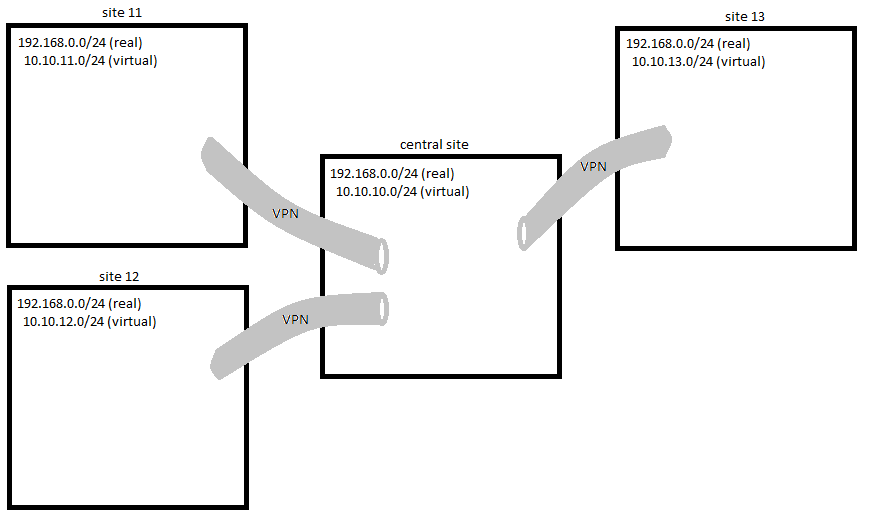 Operating a VPN is not a problem for me. I currently connect 60+ sites. But I don't find a simple way to do this 1:1 NAT.

Here is an example of a packet sent from the central site to a remote site, and its response packet :

I did some tests with iptables NETMAP but I can't manage to make it work because I don't find a way to modify source+destination after routing decision.
I prefer to avoid the new --client-nat OpenVPN's feature.
Maybe I have to force routing with ip route ? Or to loop twice into the network stack with veth ?

Solution 1 : do the NAT on the remote sites. Not possible in my case. I have to do it only on the central site.

Solution 2 : setup one VPN for each remote site. So I'll have one tun for each. I think this can be ok. Not very memory efficient but ok.

Solution 3 : setup a (unencrypted) tunnel inside the VPN for each site. This will give one interface for each. Simple tunnels are are not cross-platform (to my knoledge). For example GRE or ipip or sit are ok for Linux, but some distant sites are running only one Windows computer, so openVPN is installed on it. So impossible to setup a simple tunnel. Other option is to use a more complicated tunnel (wich ?) but the overhead on the system and on the sysadmin may be bigger than having multiple VPNs

Solution 4 : compile the latest openVPN, because its include a 1:1 NAT feature. I test this this week.

A very basic solution is :
1. use OpenVPN 2.3 or more (currently, the latest is 2.3-alpha) for server + clients
2. use the OpenVPN configuration option below
3. don't use anything else (no ipfilter, no tricks)

On the server side, you need to manually distribute VPN addresses (so no server option, you have to use ifconfig or ifconfig-push) :

The route and push route and client-nat lines are required if you want to communicate directly between routers (ping 10.99.99.1 from a distant site throught the VPN). Else you can discard them.

Now you have to choose a virtual network address. I kept the same you used in your example : 10.10.0.0/16
You allow routing for this :

You have now to instruct the client to use the 1:1 NAT :

The first line set the remote router address. Beware about Windows driver requiring special addresses.
The second and last lines allow the distant router to communicate from its 10.99.99.x interface.
Third and fourth lines do the source and destination 1:1 NAT
The fifth line tells OpenVPN what to do with the corresponding packets.

This method allow to connect sites with identical (or not) LAN addresses, without any shadowed host.

I've done something similar with real interfaces, but I can't see why it wouldn't work with VPN interfaces.

That can be done by using firewall marks and routing rules that use those marks. SNAT and DNAT are to be done with the NETMAP firewall target. For SNAT, it's the same problem, in POSTROUTING, you've lost the information that the packet came from this or that interface and they've all got source address 192.168.0.x. So you need a mark as well to carry that information from mangle-PREROUTING to nat-POSTROUTING. You can use the same mark, but then that would mean those packets would use that alternate routing table, so you'd need to duplicate the global routing table on all.

For each network, you'd do:

Above, we're using the first 4 bits of the mark, to allow up to 7 networks to be routed that way.

Not the answer you're looking for? Browse other questions tagged linux routing openvpn or ask your own question.

2
Should OpenVPN point to point tunnels be on different ports?
4
Routing through iptables
2
Routing a LAN through OpenVPN on OpenBSD 5.5
5
OpenVPN and routing problem on OpenWRT
1
Linux routing two different LANs with two different gateways
2
How to disable implicit source port mapping on outgoing UDP packets sent through NAT in iptables?
2
OpenVPN or IPtables for split tunnel control?