How to use host PTY in container?

I'm learning about container technologies of Linux and wrote a minimal container implementation on my own. I'm currently confused about consoles / terminals for container processes, as I'm "reusing" the controlling terminal as /dev/console (instead of c 5 1) in the container.

I determine the current terminal from /proc/self/fd/0 and /proc/self/fd/2, read its device node (major and minor), and mknod(2) using the discovered device nodes to create /dev/console node in the container.

This appears fine when running a regular application like /bin/sh as PID 1 (in PID namespace), but not when through an init system (I used BusyBox for this).

Here's my /etc/inittab for the BusyBox rootfs:

However, the shell spawned by init always complains can't access tty; job control turned off. I also tried using the same host TTY node for /dev/tty (instead of c 5 0) but this problem still persists. 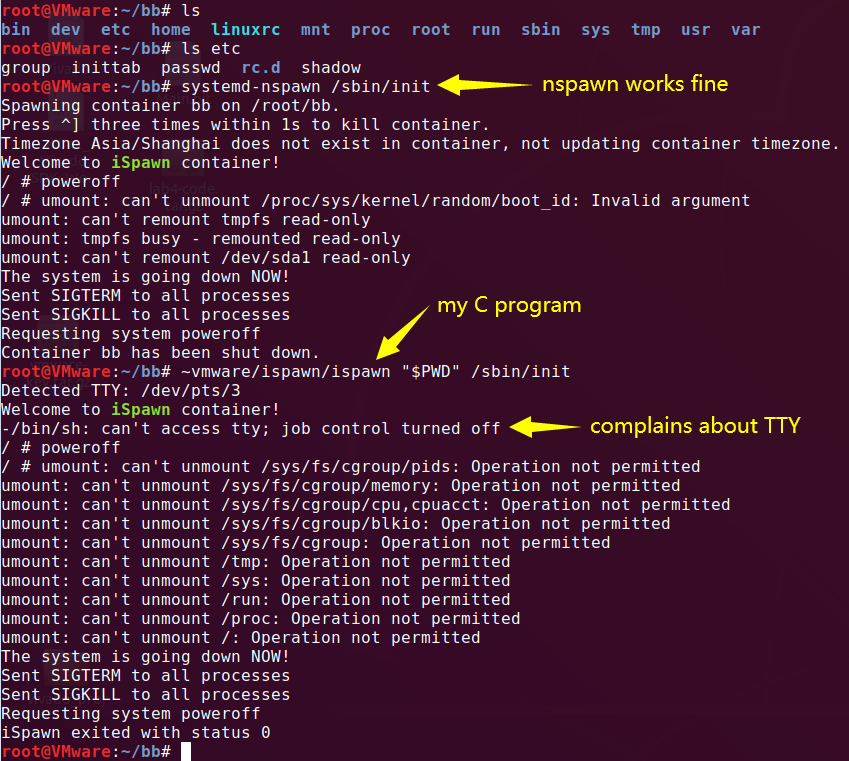 I looked into the source code of systemd-nspawn and found that it creates a "forwarded pty", where the container runs on a new PTY that's "forwarded" to the host side. The code is too complex for my educational project so it's not viable for me.

How can I use the host terminal for the container?

Details: My container program clone(2) only one child with flags = CLONE_NEWGROUP | CLONE_NEWNET | CLONE_NEWPID | CLONE_NEWIPC | CLONE_NEWUTS | SIGCHLD, and the child sets up capabilities (blacklisting) and seccomp (whitelisting, syscall list taken from Docker), before pivot_root(2) to the container rootfs and execve(2) into the target application.

I'm currently experimenting on Linux 5.3 (Ubuntu 18.04 HWE), but I don't expect this to be different on any recent Linux versions.

5
Difference between the terminal file and the terminal screen
3
init, syslog and stdout/stderr
2
Using gpm as mouse input in my application started from mc (midnight commander)
7
Run command in background with foreground terminal access
0
ps axf shows "/sbin/init splash" for PID1
2
What's the point of a daemon detaching itself from controlling terminal if the terminal can never be closed?
0
What can happen if you rm -rf a systemd-nspawn container directory from host while running?