I have a L4 ipvs load balancer with L7 envoy balancers setup. Let's say one of my L4 balancers goes down and thanks to consistent hashing the traffic which is now handled (thanks to BGP) by another L4 balancer is proxied to the same L7 node.

This should work without any problems and I would think is a common setup.

Problem is with long-running connections. When new L4 node receives the traffic (just data - ACK/PUSH packets) and no SYN packet has been received by the node, the node just sends RST packet to the client which terminates the connection. Picture below illustrates this.

This should not be happening and my question is, is there a way (a sysctl config or something) which is the reason for this? I know I can perhaps drop RST packets using iptables, but that doesn't sound right. 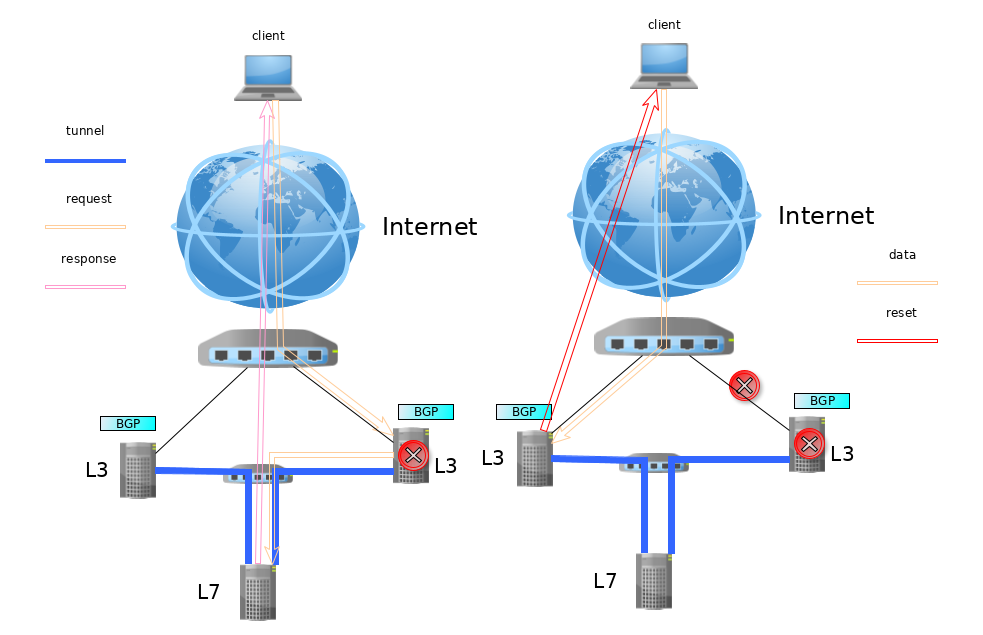 There is actually a sysctl variable net.ipv4.vs.sloppy_tcp for this specific problem (https://lore.kernel.org/patchwork/patch/386081/?fbclid=IwAR17t0jEvRSlvZFch1Lz_CDMjYOzUluuNGQmiyKequZK1Vq4kI75vezWEGs) which solves this.

The big thank you goes to Patric Shuff who's helped me figure this out (great presentaition on this topic - https://www.usenix.org/conference/lisa16/conference-program/presentation/shuff).

Not the answer you're looking for? Browse other questions tagged tcp load-balancing ipvs or ask your own question.

10
How to investigate a random reset on TCP client port connected via loopback interface to a server
1
Drop TCP packets and prevent TCP retransmission
1
Linux drop packets if received from another equipment
2
Can you send a TCP packet with RST flag set using IPTABLES as a way to trick NMAP into thinking a port is closed?
7
server replies to TCP SYN packets with delay