I need to monitor CPU and network utilisation from a terminal.

For network traffic, I have found the perfect tool: slurm. It gives me a moving chart. It gives me an nCurses-like UI I can use from a tty. 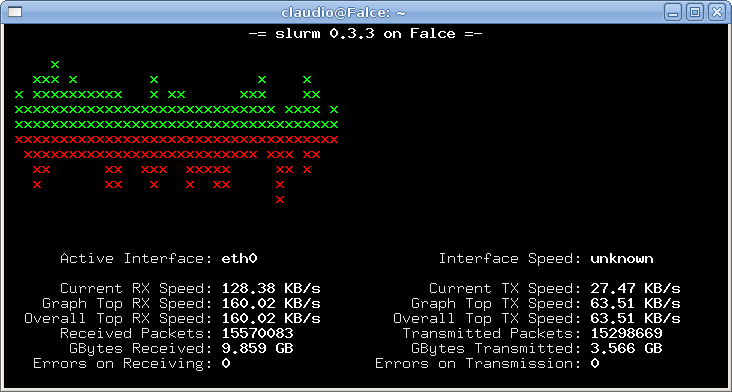 Is there a slurm equivalent showing CPU utilisation?

I couldn't find a live, text-only CPU chart either. So, I made one.

Here's a link to my github repo: https://github.com/rigel314/ttysys

Try it out if you like, and please report any errors on my repo's issues page. You will have to compile it from source. I provided a simple makefile that calls gcc.

You can run the program using make then ./build/target/ttysys Alternatively, you can run make install followed by ttysys since it is in your path now.

sequence can consist of any number of the following characters:

These same buttons will control the program while it is running.

It works by reading the first few lines in /proc/stat that begin with cpu.
man 5 proc explained the meaning of contents of /proc/stat.
These lines tell you how much time each CPU spent in different states. The sum of each line is the total time spent for each CPU. I read this file twice with a second in between. Then, I subtract the two totals to have the total CPU time spent during my sleep(). Now, I add the user and system numbers together and divide by my difference. Finally, it's just a matter of displaying it nicely. 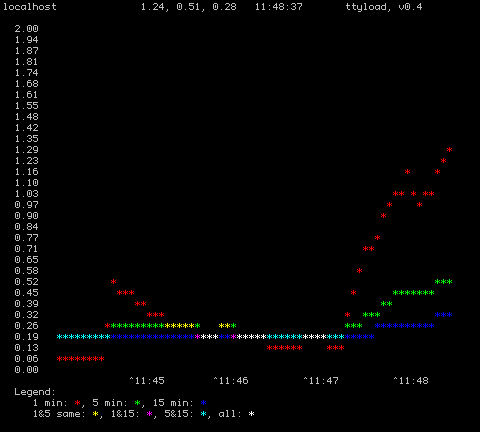 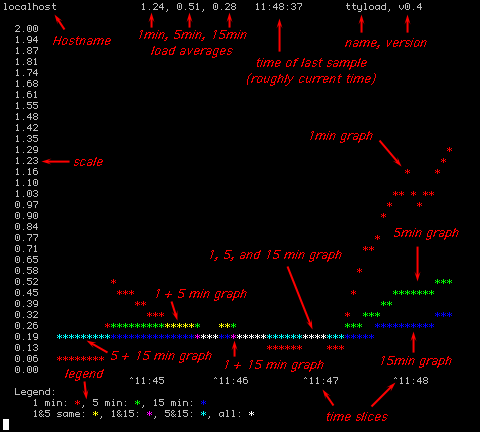 Take a look at Glances. I think it might fit your bill. 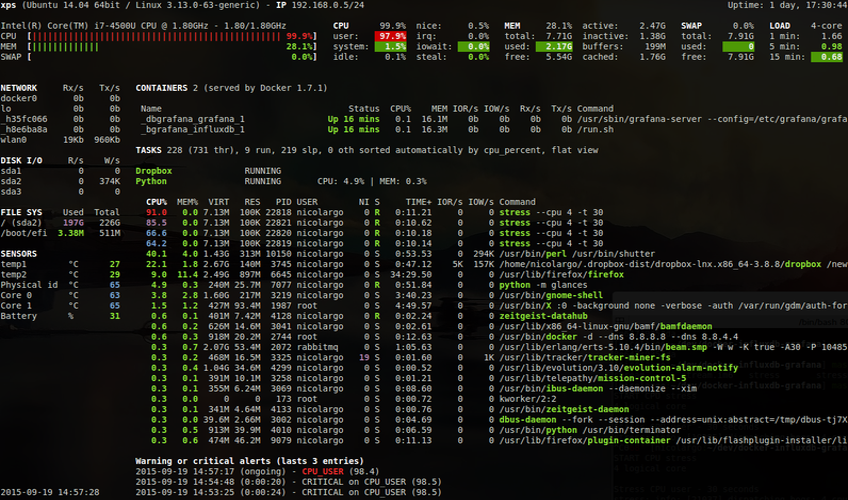 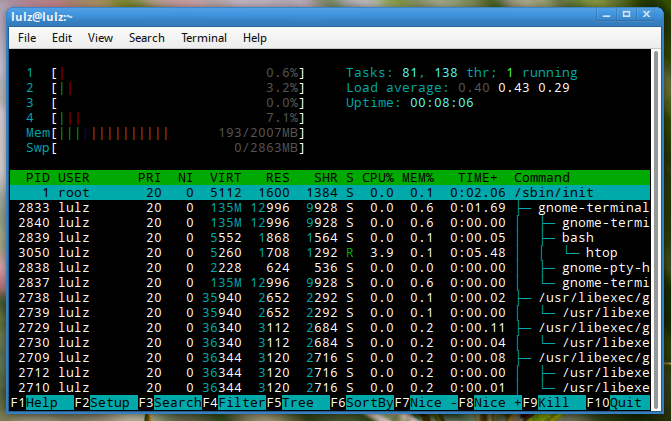 I use elmon (http://elmon.sourceforge.net/) it may draw graphs not only for the CPU. For example: 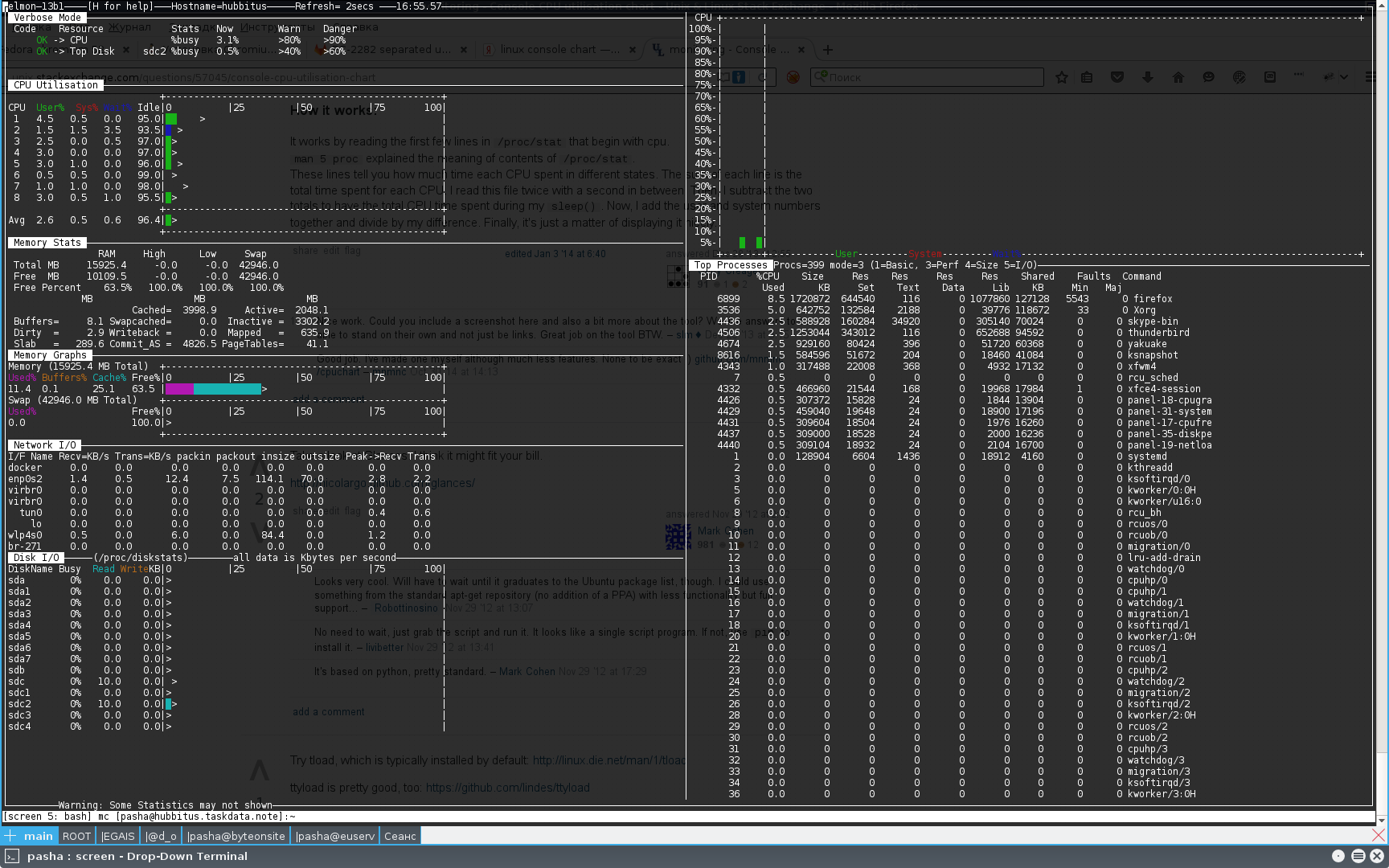 Not the answer you're looking for? Browse other questions tagged monitoring performance or ask your own question.

3
Bandwidth monitoring in Linux
1
Bandwidth, CPU & Memory stats returned in single line from terminal
6
log network activity in ubuntu server
1
Tracking/Monitoring Short-Lived CPU-Intensive Process on one CPU
0
How to find which background tasks take most of my memory and CPU time?
1
Inline tool for Linux process time series for CPU and memory