Can Dolphin create copies of a file in the same folder without prompting for a new name?

As a former Microsoft Windows user, I'm used to using Ctrl+C and Ctrl+V on a file, which then creates a copy/copies of the same file.

Attempting this in Dolphin results in a prompt that the file already exists and that I should enter a different target file name. Can Dolphin be configured to match Microsoft's Windows behaviour?

Dolphin has a new “Duplicate” feature that can be used to quickly create copies of selected items (me: Nate Graham, Dolphin 20.04.0)

I prefer the simpler route of adding timestamps with the help of Dolphin Service Menus as described below.

Consider a file titled out.mp4. The image below shows the original and a few copies with time stamps. 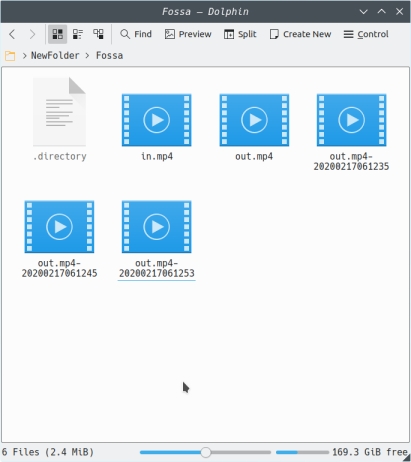 Create /home/dkb/.local/share/kservices5/ServiceMenus (where dkb is to be changed appropriately).

In there, create an empty text file named copy-with-stamp.desktop

and save the file as plain text.

You can make the timestamp more or less elaborate depending on your needs. man date explains how. But you must ensure that cp-with-timestamp.sh is executable (which can be done in Dolphin itself) and stored in your $PATH (or provide the entire path and filename in the Exec=line). I have ~/bin in my $PATH and so I keep cp-with-timestamp.sh in ~/bin.

Once you've created both the .desktop file and the executable script, you can right-click on any file in your home folder and see the context menu option: 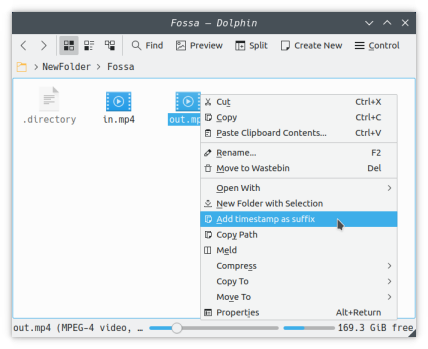 Note that my context menu isn't standard: I've removed some things, added others.

Not the answer you're looking for? Browse other questions tagged kde dolphin or ask your own question.

4
KUbuntu 10.04 / Dolphin File Manager: Is there a way to make .desktop files display the filename the same as the NAME= in the metadata?
2
Is it possible to add KDE/dolphin service menu for specific file extension?
1
KDE Dolphin stopped using folder icon for regular folders
2
Keyboard shortcut to focus the file list in Dolphin?
0
cat: append a text file in another folder as Dolphin action
0
How to make “Focus follow mouse” for Dolphin File Explorer?
0
How to configure per-directory view-settings in KDE dolphin? (For a media center / movies folder.)